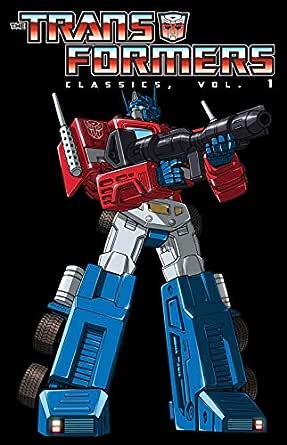 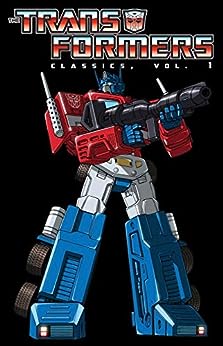 The original series faithfully reproduced after 25 years! After saving their own world from a celestial catastrophe, the Autobots and Decepticons have crashed landed on Earth! Each side sets out to explore their new surroundings, seeking resources and possibly allies. One such ally may be a bookworm named Buster Witwicky, and his mechanic father, Sparkplug. Originally published by Marvel Comics as THE TRANSFORMERS Issues #1–13.
click to open popover

samiam
4,0 van 5 sterren Nostalgia for the 1980s!
20 april 2018 - Gepubliceerd op Amazon.com
Geverifieerde aankoop
Nostalgia for my 1980s childhood got me to buy this. The story and art are cool but this reprint volume isn't that great. First it is a paper back. Really wished IDW would reprint this original Marvel series as a hard cover omnibus. As a result of being a paper back, the cover can be easily damaged -- covers can easily fold and tear. The pages are sturdy but you can open the book flat on a table. Literally, this graphic novel has to be held like any other paper book to read. But it is bigger then a normal paper back novel and holding it is cumbersome. If you can get over the physical limitations of the book and you grew up watching the Transformers cartoons in the 1980s, then this is for you.

There are couple of good things about this reprint. Volume 1 collects issues #1 - #13 of the original Marvel series including the full reprint of issue 3 which guest starred Spider-man. For the longest time, due to trade mark issues related to Spider-man, IDW couldn't reprint #3. Circuit breaker, introduced in issue #9 and is a Marvel creation, also had trade mark issues but issue #9 is also reprinted in its entirety. Other notable issues include #8 with the introduction of the Dinobots, #10 with the first appearance of the Constructicons, and #11 where Jetfire was introduced.

James
5,0 van 5 sterren Whoa, and I thought the Cartoon was Awesome!
28 augustus 2015 - Gepubliceerd op Amazon.com
Geverifieerde aankoop
Speaking as a diehard Generation One fan and a diehard hater of the live-action movies, I think this book is very worth the while of any serious Transformer fan.

From the beginning of the story, you see that things are different in the Marvel Transformers universe (Yeah, Marvel produced this before it was picked by IDW Comics) than the cartoon. Watching the original G1 Cartoon is recommended, also, before reading these books, but it's not a necessity.

Instead of humans trusting the Autobots right off the bat, most of the humans are like the humans in the horrific Bayformers films where they are distrustful of the Robots at first. However, there are a few humans who trust them, mainly the character of Buster Witwicky (Spike in the cartoons, Sam in the movies...technically). Also, Spider-Man and SHIELD make appearances. How cool is that?

Now, if you are expecting this to be very dynamic and full of action, well, you won't be disappointed, but there is also a LOT of talking in order to establish the characters. There's an entire sequence where the Autobots and Decepticons all sound off and talk about their personalities and individual powers. A little weird and it kind of ruins the pacing.

The thing to look for here is the character of Shockwave, who was set up to be the main villain of Dark of the Moon originally and who is well-known to a lot of fans as a braindead loyalist to Megatron in the show. However, in the comics, he's like an evil version of Spock, relying on pure logic and mathematics to drive him and he is also like Starscream, only unlike Starscream...Shockwave is successful in toppling Megatron who is reduced to a low-level minion for several issues.

Also, you get to see glimpses of what Cybertronian customs and religions are like. How cool is that?
Meer lezen
10 mensen vonden dit nuttig
Vertaal recensie in het Nederlands

Patrick Correa
5,0 van 5 sterren The beginning of the greatest comic ever!
29 november 2013 - Gepubliceerd op Amazon.com
Geverifieerde aankoop
I love both the US & especially the UK Transformers comics. First off, let me say that Marvel in general makes the best comics ever. X-Men, Avengers, Fantastic Four Iron Man; the list goes on. Even some of the toy based ones were great. Besides the obvious suspect, I also loved Micronauts & Rom. They all continue to entertain me to this day. While the US Transformers comic was spotty at times there were still some very good issues. But when Furman came along, it was nothing but awesome, all the way through Generation 2. I have to admit that overall I think it’s better than the cartoon, especially when you include the UK issues. Although I think season 2 of the show represents the high point of 80s animation (as well as at least two-thirds of season 3), the comic lasted longer than the show & got to handle more characters which made it a little more interesting. And I have to admit that while the first season is good on its own, I like the first twelve issues of the comic a bit better. A few episodes presented a better debut for certain characters. Heavy Metal War was significantly better than issue #10 of the comic (though that issue was good too), and Jetfire’s origin was much better in the cartoon, even if he was called Skyfire. But aside from 2 or 3 more episodes those are really the only better parts of the first season. I love everything about the first 12 issues. The characters all get a better introduction than in More Than Meets The Eye, especially the cassettes. I find it really interesting that Ravage, Laserbeak & Buzzsaw (& later Ratbat) can talk as opposed to only speak in animal noises. And they should too. Their tech specs all have quotes, and how could they have quotes if they couldn’t talk? I wonder what Laserbeak & Buzzsaw would have sounded like, but to this day I always use Ravage’s Beast Wars voice when reading his lines in the comic. Ratchet & Shockwave are also significantly cooler in the comic. In the cartoon, Shockwave was just another of Megatron’s loyal followers while in the comic he fights him for leadership (believing himself to be the most logical choice for leader, which is closer to his tech spec) & beats him. And while Ratchet never got much of a spotlight in the cartoon, he got a really good one in issues 7 & 8. But the biggest improvement over the cartoon as a whole (apart from lasting longer) is the Dinobots. In the second season they were always cool, but in the first season their stupidity was a little annoying at times. Here though they are smarter and they come from Cybertron (which makes them more interesting than being built on Earth as it lead to one of my favorite UK stories, Grudge Match) & got their forms because their ship was scanning the inhabitants of the Savage Land. That’s another nice little bonus I wish we could’ve seen more of, interactions with the Marvel universe. Ah well at least we got a crossover with Spider-Man. And I don’t care what anyone says, these stories all take place in my ideal Marvel Universe (the Transformers & G.I. Joe cartoons were technically produced by Marvel, & that’s good enough for me). Really, I have nothing but praise for the first 12 issues. The only nitpicks I have are that Buster & Jessie aren’t quite as cool as Spike & Carly, & I wish that Sparkplug had eventually opened up to the Autobots, but I guess I’ll just have to write fanfiction to fill in the gaps (though I was very glad when they brought Spike in later). Sadly there is one real flaw in this volume, in that it does not end on a good story. I’m not superstitious but 13 was a really unlucky number for this comic. The story Shooting Star is about a loser who happens to find a mentally damaged Megatron in gun form & uses him to make grand robberies. It’s not the only subpar story Budiansky would write but it is by far the worst. Bob, we buy the Transformers comics for the giant robots, not the people they happen to meet. If you were so bothered by Hasbro asking you to keep throwing in new toys maybe you could have used this issue to spread it out a bit more. But still he did a good job overall, even with some of the later ones (especially the Headmasters miniseries).

Overall this is a must-read. This is easily the best of the Transformers Classics without any stories by Simon Furman in them. To be honest while the next 9 issues are good, with a couple exceptions they pale in comparison to the second season of the cartoon (I honestly like to use my imagination of what happened after this & some tweaking of the dialogue here & there to get the series to the point where it’s compatible with the second season), but starting with issue 23 it does get great again, for a little while at least. The next couple volumes are overall a bit spotty, but there’s still some good to be found. For further details, stay tuned for more reviews.
Meer lezen
6 mensen vonden dit nuttig
Vertaal recensie in het Nederlands

noel castillo
5,0 van 5 sterren Great comic. I am a fan of the 80s ...
23 januari 2017 - Gepubliceerd op Amazon.com
Geverifieerde aankoop
Great comic. I am a fan of the 80s cartoon. I watched the reruns as a kid and loved it. This is the comic that started it all! I started collecting these volumes and plan on collecting the UK version when I am done. If your a true fan of the G1 transformers you won't be disappointed. Happy reading!
Meer lezen
Een iemand vond dit nuttig
Vertaal recensie in het Nederlands
Ga naar Amazon.com om alle 48 recensies te bekijken 4,7 van 5 sterren
Terug naar boven
Over ons
Verkoop bij ons
We helpen je graag
© 1996-2020, Amazon.com, Inc. en dochterondernemingen