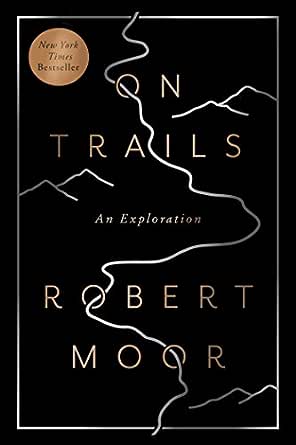 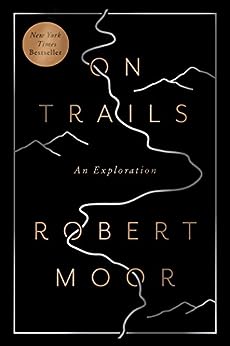 "Like Montaigne, Mr. Moor writes about one subject as a way of touching on 100 others. Although his ostensible topic is how humans and other creatures make the routes that get them from A to B, On Trails also considers Greek mythology and the origins of life, the intricacy of caterpillar nests and the stealth of elephants, the physicist Richard Feynman and the Biblical Cain. The thicket of information here comes to resemble a densely wooded trail itself--one that Mr. Moor expertly navigates. He's a philosopher on foot, recording his journey through miles of wilderness and through a mind sorting out the meaning of travel itself. ... The only constant in On Trails is the promise of surprise."
--The Wall Street Journal

"The best outdoors book of the year. ... An outstanding work that should be read by anyone who has spent time following a footpath through the woods. Robert Moor's debut book, On Trails, trips through natural history, anthropology, gonzo reporter's adventures, and memoir in a ramble that unpacks the many meanings of the routes we humans and other animals sketch on the land. ... The prologue alone is worth the price of admission: a nearly-30-page set piece about hiking the A.T. that puts Bill Bryson and Cheryl Strayed to shame. (Moor actually, you know, completed the full thru-hike.)"
--Sierra Club

"Part natural history, part scientific inquiry, but most of all a deeply thoughtful human meditation on how we walk through life, Moor's book is enchanting."
--The Boston Globe

"A wanderer's dream, even from an armchair."
--The Economist

"Stunning ... a wondrous nonfiction debut. ... In each chapter, Moor explores the same phenomenon in a surprising new context, from the fossilized traces of prehistoric smudges to swaths of jungle flattened by elephants, from the paths of nomadic Native Americans to the interstates that paved them over. Along the way, Moor reaches into the history of science, religion, and philosophy to trace similar lines of refinement in the amassing of knowledge and ideas. ... It's an exhilarating journey."
--Departures

"You might think of Robert Moor as the Roger Angell of trail-walking. Just as Angell's reports on specific baseball games segue effortlessly into reflections on the venerable sport itself, so Moor looks up from whatever trail he may be on to see the big picture. Which is often very big, indeed. ... Highly satisfying ... On Trails is an engaging blend of travelogue, sociology, history and philosophy that might be summed up as a meditation on the centrality of trails to animal and human life."
--The Washington Post

"This book is about so many things: about breaking down the binary between 'humanity' and 'nature, ' 'civilization' and 'the wild.' It's an exploration of exploring, a philosophical-psychological-journalistic adventure in the tradition of Michael Pollan and Rebecca Solnit. ... Not all who wander are lost, and Moor helps us see what they seek."
--New York Magazine

"Moor's writing compares better with wilderness philosophers like Annie Dillard or Edward Abbey. Each chapter of this GQ writer's debut work is packed with ideas, switchbacking to and fro. Each idea is so carefully portrayed and deeply fascinating that I had to stop and catch my breath often. ... It's a beautiful trek through the human and natural landscapes of modern life."
--Chicago Review of Books

"A beautiful thing to behold. ... what a profoundly talented writer Moor is. He brings a keen essayist's eye to themes both personal and empiric; his prose is lush and lively and his analysis adroit -- all making On Trails a true treat to read."
--BuzzFeed Books

"Spectacular ... an example of narrative nonfiction at its finest. Those with a passion for walking, hiking or exploring will be naturally drawn to Moor's subject, but this is so much more than a subject-specific story; it is a book that poses big questions about humanity's place in the world (literally and figuratively) and how we've come to be here--and it's fascinating to its very end."
--Shelf Awareness

From a talent who’s been compared to Annie Dillard, Edward Abbey, David Quammen, and Jared Diamond, On Trails is a wondrous exploration of how trails help us understand the world—from invisible ant trails to hiking paths that span continents, from interstate highways to the Internet.

While thru-hiking the Appalachian Trail, Robert Moor began to wonder about the paths that lie beneath our feet: How do they form? Why do some improve over time while others fade? What makes us follow or strike off on our own? Over the course of seven years, Moor traveled the globe, exploring trails of all kinds, from the miniscule to the massive. He learned the tricks of master trail-builders, hunted down long-lost Cherokee trails, and traced the origins of our road networks and the Internet. In each chapter, Moor interweaves his adventures with findings from science, history, philosophy, and nature writing.

Throughout, Moor reveals how this single topic—the oft-overlooked trail—sheds new light on a wealth of age-old questions: How does order emerge out of chaos? How did animals first crawl forth from the seas and spread across continents? How has humanity’s relationship with nature and technology shaped world around us? And, ultimately, how does each of us pick a path through life?

Moor has the essayist’s gift for making new connections, the adventurer’s love for paths untaken, and the philosopher’s knack for asking big questions. With a breathtaking arc that spans from the dawn of animal life to the digital era, On Trails is a book that makes us see our world, our history, our species, and our ways of life anew.
Alle bekijken
click to open popover

ajbarlow
5,0 van 5 sterren On Trails led me through history, images and ideas like a compelling mountain hike.
1 november 2016 - Gepubliceerd op Amazon.com
Geverifieerde aankoop
A beautifully written, researched and printed book, On Trails truly grooved a path in my heart. I have long enjoyed hiking in the mountains around my city and now find myself contemplating the trail, thinking about the makers, the other walkers, and the course of history and time that shaped these paths. Moor is a wonderful storyteller and researcher. I reread many chapters and looked up a few beautiful words I wished to understand better. I am glad to know more about some of the history of the United States trail system, and how that connects us to the broader world, both geographically and as fellow travelers. Although I will likely never have the opportunity to hike the Appalachian Trail, this book definitely planted an interesting little seed in me; I'm intrigued to see what spouts from it. Thanks, Robert Moor, for the inspiring exploration.
Meer lezen
24 mensen vonden dit nuttig
Vertaal recensie in het Nederlands

TexasBuyer 83
5,0 van 5 sterren 11/10. Yes it's that good!
16 maart 2017 - Gepubliceerd op Amazon.com
Geverifieerde aankoop
Let me be very clear. For anyone who likes history, this is a must read. I stumbled across this book on Amazon whilst searching for unique history books. I took a chance and was absolutely blown away. The level of detail and the way it has been articulated is outstanding.

RVG
2,0 van 5 sterren Exhausting Read
12 juni 2018 - Gepubliceerd op Amazon.com
Geverifieerde aankoop
Honestly I gave up on it about 100 pages in. I’m all for well researched and informative books but this is on a crazy level. Everything is spelled out to an exhausting extent. It’s almost like the author was trying to stretch the book out more by writing a paragraph where there should have been a sentence. Makes for an incredibly boring and exhausting read. I wouldn’t recommend unless you want to know every tiny detail of every trail ever.
Meer lezen
7 mensen vonden dit nuttig
Vertaal recensie in het Nederlands

Dr. Bob
5,0 van 5 sterren A page turner that's almost as good as peeling off your socks after you've been hiking all day. Very satisfying!
27 januari 2017 - Gepubliceerd op Amazon.com
Geverifieerde aankoop
Fascinating books are often the products of an author taking a look at regular stuff from a perspective wildly different from the rest of us! Clearly this is the case with Robert Moor's On Trails: An Exploration.

It isn't at all what I expected—it's a lot better! This book is an exploration of the trail as a planet-wide phenomenon; the trail's impact on science, animals, us, and the earth herself. Here, the trail becomes a metaphor for just about everything else. In "On Trails" we follow all sorts of paths ranging from traces left by an early life form hundreds of millions of years ago, to philosophical constructs about the physical and philosophical differences we Homo Sapiens give trails and paths: "...the difference between a trail and a path is directional: paths extend forward, whereas trails extend rearward." Paths..."are lines projected forward in space by the intellect... by contrast, trails tend to form in reverse, messily, from the passage of dirty feet."

It is a well-written book that will resonate with you if your brain works like mine—that is to say, a mind that is curious and wants to take a closer look at things.

On Trails: An Exploration, is a neatly tied bundle of those wild ideas we dream up when leaning back against the pack near the summit of a peak 4 days out from the nearest road. While it probably didn't happen this way, On Trails makes me wonder if the author, after wandering about in the green world carrying a heavy backpack for a couple of weeks, sat down all hot and sweaty, peeled off his socks in a moment of sheer ecstasy, then turned and asked, in the finest of non sequitur traditions, "Do you want to know the difference between a trail and a path?" Indeed!
Meer lezen
5 mensen vonden dit nuttig
Vertaal recensie in het Nederlands

Camp Runamok
4,0 van 5 sterren A fun book that goes far afield.
15 augustus 2017 - Gepubliceerd op Amazon.com
Geverifieerde aankoop
As I expected, this book goes far afield (pun intended) from just human trails. Trails was just a great excuse to write a book about all sorts of subjects related to trails and various animal behaviors. The writing style is casual and fun. While his interest in trails was the result of having done the Appalachian Trial, he goes back to the primordial ooze for the first trails, and explores everything you could ever want to know about trails, and then some, from ant trails, to elephant an zebra trails, to how the road system effectively followed old Indian trails. Near the end of the book, he kept coming to what seemed like a logical place to end the book, but over and over again he would find new avenues to explore, so it was like a series of false summits. But in aggregate, it was a very interesting and worthwhile book to read.
Meer lezen
4 mensen vonden dit nuttig
Vertaal recensie in het Nederlands
Ga naar Amazon.com om alle 227 recensies te bekijken 4,3 van 5 sterren
Terug naar boven
Over ons
Verkoop bij ons
We helpen je graag
© 1996-2020, Amazon.com, Inc. en dochterondernemingen