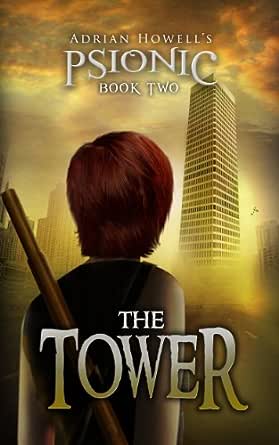 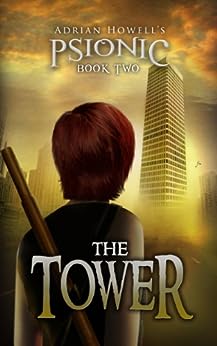 After a very shaky beginning as a wild-born telekinetic, Adrian is elated to discover that his new home is at the center of the world's largest psionic city. It should have been a dream come true, but something here is just not right. It's not just that his sister is still missing, or that he is being forced into a rigorous combat training program that is slowly turning him into a killer. Something rotten is hiding... inside him. Adrian must discover the truth behind his recurring, shadowy nightmares, and face the possibility that the greatest evil threatening everything he holds dear might, in fact, be himself.

The Tower is the second book of Adrian Howell's Psionic Pentalogy: a supernatural adventure series with psychic children, teens and adults, telekinesis, telepathy, and many twists and turns in a harsh urban fantasy world.

H. Bala
4,0 van 5 sterren volume 2 of a promising YA urban fantasy series
28 december 2015 - Gepubliceerd op Amazon.com
Geverifieerde aankoop
As pen names go, I guess "Adrian Howell" isn't as silly as, say, "Pittacus Lore." Speaks to how much the e-book universe has expanded that it's only now that I'd stumbled across Howell's Psionic pentalogy. If you're into secret psychic societies at war and conflicted teens who must negotiate thru them, then jump on this series quick. The mythology is sound. The dramatis personae come off three-dimensional; some of them are truly appealing. The personal conflicts ring true. I'm vaguely reminded of Chris Claremont's The New Mutants and the Hellfire Club.

For those who have yet to read Wild-Born: Psionic Book 1, maybe some SPOILERS now for the rest of this paragraph - only, why would you read this if you haven't read Book 1? Anyway, 13-year-old Adrian Howell is having a year. Months ago, his telekinetic ability kicked in and got his parents murdered and his little sister abducted. Got himself abducted, too, and experimented on. The only good news to come out of this was that he met the hider/finder Cindy and the damaged, 8-year-old healer/telepath Alia, two folks he would eventually come to regard as family.

Psionic: The Tower (Book 2) keeps on chronicling Adrian and Alia's progression as characters and as broken people on the long road to recovery. Fresh out of captivity, Adrian and Alia find respite in a community of Guardians. Cindy, deemed the most paramount cog in that community, seeing as how her cloaking ability mutes the Guardians' presence from psychic detection, gets special treatment, one example of which is her swanky penthouse residence in a lofty tower. And since Cindy serves as surrogate mom to Addy and Alia, the kids are along for the perks.

We know the score. We suspected that peace of mind would prove an ephemeral thing. But, in between the persistent antsy feeling, there's stuff to enjoy. There's deep gratification in Alia's story arc, how far she's come along. I love her relationship with Adrian, and that Adrian eases off on his angst enough to tell Alia that she's like his little sister to him. With Cindy and Adrian around and some stability and security in her life, Alia begins to blossom. Who knows, she may even try her hand at speaking instead of communicating strictly thru telepathy. As for Addy, his routine isn't as bucolic. Still struggling with his telekinesis, he's assigned a combat instructor in the shape of an enigmatic and super-surly teenaged girl named Terry. Addy's resentment - because Terry isn't the sort to ease up on her training - is compounded when he begins having unsettling dreams with her in them. I'm sure these dreams don't figure in the plot.

This author knows how to balance character development and world-building and wild action. Maybe, more than anything, I like that there's a real price to pay in this world, real-life consequences. Adrian isn't a perfect kid. He's often times petulant and prone to temper tantrums. He second guesses himself all the time. He's selfish and impulsive. He all the time feels bad that he hasn't done more to go after his sister, Cat. Adrian is at times unlikable, but it's because he comes off as a real person. I'm smack in the middle of Book 3 right now, so I can't say yet that this level of excellence carries on thru the entire pentalogy. But where I'm at right now, this series is unputdownable stuff. I honestly don't care as much for the big picture stuff - the Guardians versus Angels conflict - as much as I'm jonesing for the personal, more intimate stuff. I can't wait for Addy and Alia to hone in on their powers even more. Can't wait for Addy to find Cat. Can't wait for more of Terry, a teen girl who can kick any number of adult asses. And, hopefully, we're graced with more scenes of Addy and Alia just hanging out. Those day-in-the-life bits may be my most favorite moments. The author has written these characters as dang engaging (especially when Addy isn't aggravating) and has infused such a credible sense of jeopardy that I'm kept at the edge of my seat as I flip thru the pages, fingers crossed that my favorite characters stay okay.
Meer lezen
4 mensen vonden dit nuttig
Vertaal recensie in het Nederlands

Denae C
4,0 van 5 sterren Quick but with depth
9 februari 2017 - Gepubliceerd op Amazon.com
Geverifieerde aankoop
I wouldn't describe this book as fast. There's not as much action as in the first one, and most of the danger is distant and abstract. Adrian does a lot of training and schooling for nearly a year with a few brushes with the outside world and armed angels. Most of his real problems seem to be all character, which, in itself, is rather neat. For an action story (with super powers) to put so much effort into developing the characters and their personalities and motivations . . . I'm impressed. Adrian debates the morals of killing, even in self defense, and he wrestles with figuring out who is his family and not.

The book still held a lot of tension. For some reason, the Angels and Guardians have both decided Cindy is the most important psionic in the world. I'm not entirely convinced on that. Still, it does mean we can expect anything at any time. Even from an innocuous nightmare.
Meer lezen
Vertaal recensie in het Nederlands

David A. Dill
5,0 van 5 sterren Excellent Continuation From Book One
7 februari 2016 - Gepubliceerd op Amazon.com
Geverifieerde aankoop
I usually don't read much paranormal fiction, but The Tower: PSIONIC Book Two (Psionic Pentalogy 2) by Adrian Howell is definitely worth the time to read and got me hooked. I enjoyed every page of this book. Adrian Howell, the main character, is a totally believable character who finds he has powerful telekinetic abilities. Being a teenager, he does things a teenager would do, but after a tragedy he is forced to go on the run and grow up fast. He goes to live in a community of people with psionic abilities. I was as reluctant to put this book down as I was with the first volume. Once I finished it, I immediately bought the third one and had to force myself to not start until later. I can't wait to finish the series, A very well told story clearly taking up where the first book left off. A well written book, I highly recommend to everyone. Great book, Adrian Howell!
Meer lezen
Vertaal recensie in het Nederlands

BillB
5,0 van 5 sterren Excellent again
2 maart 2014 - Gepubliceerd op Amazon.com
Geverifieerde aankoop
This series is similar in some ways to the Harry Potter series. Classical Good Vs. Evil. Enough plot twist to keep interest up. Not just for adolescents either, I'm 70 and am enjoying it. Just like the Harry Potter series which I've read 3 times. Would be nice to see a movie series about Adrian, Alia, Terry and Cindy.
Meer lezen
15 mensen vonden dit nuttig
Vertaal recensie in het Nederlands

terry
5,0 van 5 sterren Fascinating, intriguing, reality/fiction?
6 november 2015 - Gepubliceerd op Amazon.com
Geverifieerde aankoop
After reading book 1, I was intrigued so much that I had to read book 2, The Tower. I just finished book 3 and immediately had to order books 4 and 5! This like nothing I have read before, and I have felt like "is this real, or just imagination?" The entire time I have been reading it it is like stepping into a different place, but also feeling like I belong. I don't know if that even makes sense or not. I am compelled to keep reading so am not sleeping much! This series has me expanding my "what if's" for sure. Could we have these secret societies? We have for centuries. Could people possess these abilities? The more I have read and studied and experienced leads me to believe that just about anything is possible as long as I am able to keep an open mind. I have to stop now so I can start book 4!!!
Meer lezen
Een iemand vond dit nuttig
Vertaal recensie in het Nederlands
Ga naar Amazon.com om alle 124 recensies te bekijken 4,6 van 5 sterren
Terug naar boven
Over ons
Verkoop bij ons
We helpen je graag
© 1996-2020, Amazon.com, Inc. en dochterondernemingen