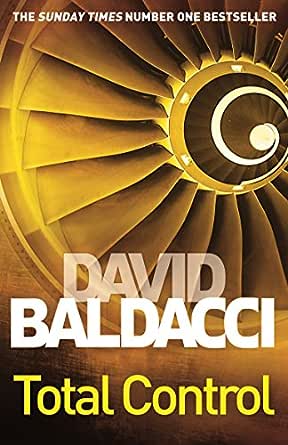 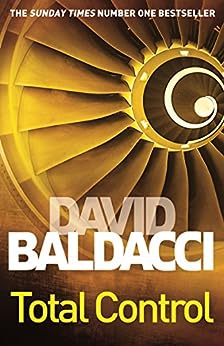 "Moves at the pace of a flying bullet...suspense at high speed."--Orlando Sentinel

"A crackerjack thriller...Baldacci keeps the paranoia at a fever pitch."--Flint Journal

"A lightning-paced thriller...moves along with splendid pace and believability."--St. Petersburg Times

Total Control is a breathtaking thrill-ride on a roller-coaster of non-stop action and suspense from David Baldacci, one of the world's favourite storytellers.

Jason Archer is a rising young executive at Triton Global, the world's leading technology conglomerate. Determined to give his family the best of everything, he has secretly entered into a deadly game of cat and mouse. He is about to disappear, leaving behind a wife who must sort out his lies from his truths; an air-crash investigation team that wants to know why the plane he was booked on suddenly fell from the sky; and a veteran FBI agent who leaves no stone unturned.

Soon the startling truth behind Jason Archer's disappearance explodes into a sinister plot involving the murder of the country's single most powerful individual. And Archer's wife, Sidney, is plunged straight into the violence, now faced with trail of dead bodies and shocking, exposed secrets.

C. M Mills
3,0 van 5 sterren Total Control is a Baldacci thriller dealing with the Federal Reserve and high tech corporate crime
7 juni 2018 - Gepubliceerd op Amazon.com
Geverifieerde aankoop
Total Control was written in the 1990s by author David Baldacci. It is a fast paced thriller. Sidney Archer is a well paid and respected attorney and her husband Jason is a tech whiz at a famous technological company. He is thought to have been killed in a plane crash from Washington DC to Los Angeles. Why did he tell his wife he was leaving on the flight when actually he was on the way to Seattle? Why was the chairman of the Federal Reserve Board among the victims of the plane crash on the DC to LA flight? How deeply is Sidney Archer involved in all the mystery? The FBI becomes involved and the pages fly by. The book deals with technological and financial matters which were hard to follow for this old English major!
The book is just OK and not one of the author's best.
Meer lezen
31 mensen vonden dit nuttig
Vertaal recensie in het Nederlands

Joseph J. Lisboa
5,0 van 5 sterren Political games/thrillers
16 februari 2019 - Gepubliceerd op Amazon.com
Geverifieerde aankoop
I expected this to be one of the best books I ever read, and I was disappointed until half of the book. I was feeling so negative with Baldacci’s book with so many threads and individuals involved in his drama, that I lost count of their names and job positions. The professional burglar witnessed sex and murder involving the President of United States, that no one could imagine where theses events could lead to. Initially, I was planning to drop the book with this political involvement, and confusion since I am used to Vince Flynn’s thrillers and Michael Connell's police thrillers that keep you wanting more on those actions. But then it started to make sense and I said Baldacci has something for me. Things started to being put together leading to an end I could never thought. I believed her husband would be found alive and who would go to prison for his crimes, but still I was guessing.
Great book for fans of political thrillers knowing that Baldacci has always some tricks in his pocket, like the Winner I am presently reading.
Meer lezen
18 mensen vonden dit nuttig
Vertaal recensie in het Nederlands

Sun Shy
1,0 van 5 sterren Skipable
8 maart 2015 - Gepubliceerd op Amazon.com
Geverifieerde aankoop
I have read many of Baldacci's books and liked all of them, so far. This, however, is crap. The characters feel flat and two dimensional and the dialog is stilted and cringeworthy. I half-expected the villain to be twirling a waxed mustache. Of course, Amy has inherited her mother's thick blond hair, her father's piercing blue eyes and his athletic grace. Athletic grace at two?! Just mom's hair? Baldacci hastens to inform us that the stunning Sidney was a whip thin star college basketball star with...large breasts. Sadly, staying super fit (could we hear more about his abs?), incredibly smart, career-driven and a dad didn't leave Jason time to learn about the real world and that crooks don't play fair. The transitions between the predictable plot sequences are awkward. The book reads like it was written by a first time novelist. I now see whay it has been reduced in price.
Meer lezen
42 mensen vonden dit nuttig
Vertaal recensie in het Nederlands

FJD
1,0 van 5 sterren CONVOLUTED
17 april 2019 - Gepubliceerd op Amazon.com
Geverifieerde aankoop
David Baldacci is a gifted author who has written some wonderful thrillers. Total Control is not one of them. For reasons unknown he decided to write a tale so complex with characters so shallow and duplicitous that the reader's interest is sacrificed early on. Add to that his seemingly endless descriptions of every mundane event in the book from the descriptions of books in a room, the cups in a kitchen and the makeup routine of the heroine that the reader is left mired in useless and uninteresting detail as the story plods on. Finally the plot devolves into a fantastic and unbelievable ending where every literary twist and turn of events is crammed into a ridiculous unfulfilling finale. I wont give up on Baldacci. He is too talented. But I have already forgotten Total Control.
Meer lezen
9 mensen vonden dit nuttig
Vertaal recensie in het Nederlands

B.F. Spink
5,0 van 5 sterren A Real Page-Turner
7 mei 2019 - Gepubliceerd op Amazon.com
Geverifieerde aankoop
It had been a few years since I last read anything by Baldacci, but after fiishing TOTAL CONTROL, I immediately went shopping for some of his other books. The complexity of the plot was brought together masterfully as we follow the wife of a criminal (or a good guy, we won't find out until the end) who often knows more than she tells...and often doesn't know the details others think she does. Constantly hounded by private concerns, her bosses and co-workers and an FBI agent who can't let the case go, Sidney Archer is thrown into the center of a story that starts with a downed airliner on which her husband was -- and then wasn't -- aboard. The plot thickens as both Sidney and her husband were players in a mega-billion-dollar corporate transaction, their roles separate to the point that neither knew what the other knew in terms of details. And that leads to intrigue so thick the reader has difficulty telling the good guys from the bad guys much of the time. Well worth the read, hard to put down.
Meer lezen
6 mensen vonden dit nuttig
Vertaal recensie in het Nederlands
Ga naar Amazon.com om alle 1.564 recensies te bekijken 4,4 van 5 sterren
Terug naar boven
Over ons
Verkoop bij ons
We helpen je graag
© 1996-2020, Amazon.com, Inc. en dochterondernemingen