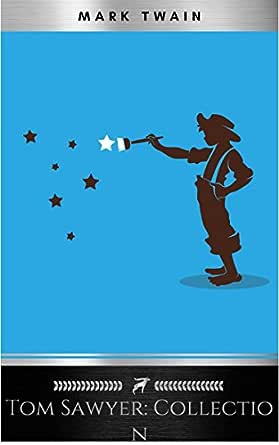 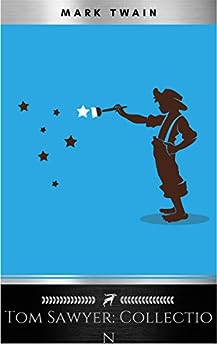 Book One: The Adventures of Tom Sawyer by Mark Twain is an 1876 novel about a young boy growing up along the Mississippi River. It is set in the fictional town of St. Petersburg, inspired by Hannibal, Missouri, where Twain lived. Tom Sawyer lives with his Aunt Polly and his half-brother Sid. He skips school to swim and is made to whitewash the fence the next day as punishment. He cleverly persuades his friends to trade him small treasures for the privilege of doing his work. He then trades the treasures for Sunday School tickets which one normally receives for memorizing verses consistently, redeeming them for a Bible, much to the surprise and bewilderment of the superintendent who thought "it was simply preposterous that this boy had warehoused two thousand sheaves of Scriptural wisdom on his premises-a dozen would strain his capacity, without a doubt." Book Two: Adventures of Huckleberry Finn (or, in more recent editions, The Adventures of Huckleberry Finn) is a novel by Mark Twain, first published in the United Kingdom in December 1884 and in the United States in February 1885. Commonly named among the Great American Novels, the work is among the first in major American literature to be written throughout in vernacular English, characterized by local color regionalism. It is told in the first person by Huckleberry "Huck" Finn, a friend of Tom Sawyer and narrator of two other Twain novels (Tom Sawyer Abroad and Tom Sawyer, Detective). It is a direct sequel to The Adventures of Tom Sawyer. Tom Sawyer Abroad is a novel by Mark Twain published in 1894. It features Tom Sawyer and Huckleberry Finn in a parody of adventure stories like those of Jules Verne. In the story, Tom, Huck, and Jim set sail to Africa in a futuristic hot air balloon, where they survive encounters with lions, robbers, and fleas to see some of the world's greatest wonders, including the Pyramids and the Sphinx. Like Adventures of Huckleberry Finn and Tom Sawyer, Detective, the story is told using the first-person narrative voice of Huck Finn. It is a sequel, set in the time following the title story of the Tom Sawyer series. Book Four: Tom Sawyer, Detective Is an 1896 novel by Mark Twain. It is a sequel to The Adventures of Tom Sawyer (1876) and Adventures of Huckleberry Finn (1884), and a prequel to Tom Sawyer Abroad (1894). Tom Sawyer attempts to solve a mysterious murder in this burlesque of the immensely popular detective novels of the time. Like Adventures of Huckleberry Finn, the story is told using the first-person narrative voice of Huck Finn.
Alle bekijken
click to open popover

LoveToRead
5,0 van 5 sterren Awesome
26 oktober 2015
Indeling: Kindle-editie
I remember reading about the adventures of Tom Sawyer, Huck Finn, Aunt Polly, Jim, Becky Thatcher, and Injun Joe, when I was a kid. Total classics! This collection is a different type of series, meaning the style of writing that is used. The stories are filled with slices of humor and many twists and turns. 'Tom knew that when his name was pronounced in full, it meant trouble.'
Nicely illustrated as well.
Here are all four Tom and Huck adventures:
-The Adventures of Tom Sawyer’
-The Adventures of Huckleberry Finn’
-Tom Sawyer Abroad’
-Tom Sawyer Detective’
Enjoy!! I give this series 5 stars!

ZS
5,0 van 5 sterren Wonderful collection of my old-time favorites!
27 oktober 2015
Indeling: Kindle-editie
Wonderful collection of my old-time favorite books, such nostalgic reads to lost oneself in!
I was excited to snatch both 'Adventures of Tom Sawyer' and 'Huckleberry Finn' to my Kindle as I'm more comfortable reading on it these days - not to mention that the copies I used to read and reread while a kid are long since gone - but to discover additional books, two more sequels was a true treat. I can't believe this collection is offered for free!
Meer lezen
Nuttig
Commentaar geven Misbruik melden
Vertaal recensie in het Nederlands

Warrior Princess
5,0 van 5 sterren What a find!
27 oktober 2015
Indeling: Kindle-editie
I thought I knew all about Tom Sawyer and Huck Finn. I've read both books (and loved them!) as a child, then read them with my kids. I was surprised to discover two new (for me) stories: "Tom Sawyer Abroad" and "Tom Sawyer Detective." How could I have missed them after all these years? I'm glad I found this wonderful complete collection. Great illustrations, too.
Meer lezen
Nuttig
Commentaar geven Misbruik melden
Vertaal recensie in het Nederlands

Jonny
5,0 van 5 sterren nice
29 oktober 2015
Indeling: Kindle-editie
I never read a book from Mark Twain. As odd as that sounds.

I am enjoying reading all the collection of Tom Sawyer. I recommend it especially since it is free. Get it now.
Meer lezen
Nuttig
Commentaar geven Misbruik melden
Vertaal recensie in het Nederlands