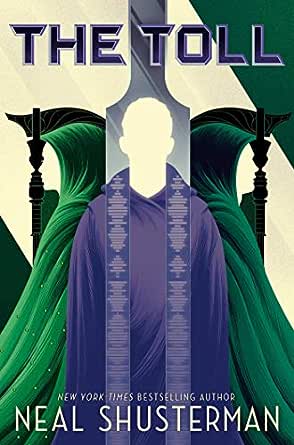 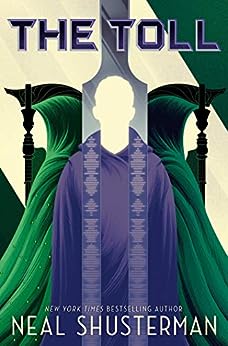 In the highly anticipated finale to the New York Times bestselling trilogy, dictators, prophets, and tensions rise. In a world that’s conquered death, will humanity finally be torn asunder by the immortal beings it created?

Citra and Rowan have disappeared. Endura is gone. It seems like nothing stands between Scythe Goddard and absolute dominion over the world scythedom. With the silence of the Thunderhead and the reverberations of the Great Resonance still shaking the earth to its core, the question remains: Is there anyone left who can stop him?

The answer lies in the Tone, the Toll, and the Thunder.

The explosive conclusion to the New York Times bestselling Arc of a Scythe series.

It's been three years since Rowan and Citra disappeared; since Scythe Goddard came into power; since the Thunderhead closed itself off to everyone but Grayson Tolliver.

In this pulse-pounding finale to Neal Shusterman's internationally bestselling trilogy, constitutions are tested and old friends are brought back from the dead.
click to open popover

Iggy Mom
2,0 van 5 sterren Wanted to love it, but PLEASE stop with the social justice lecturing!
17 november 2019 - Gepubliceerd op Amazon.com
Geverifieerde aankoop
I had been eagerly awaiting the final book in this series. The first two books kept my attention and I could hardly put them down. This book...I feel like it lost its way and I found myself thinking a few times "wow, if that had been left out of the story, we wouldn't have missed anything." I struggled to make it all the way through this one.

This book just got kind of bloated with the addition of new characters and storylines. We also had to be walloped with a healthy dose of social justice crap in the character of Jeri, who is gender fluid and sure doesn't give us a chance to forget it and just enjoy the character. In almost every scene with this character, they have to make at least one reference about being gender fluid, which I think really takes away from the character. Instead of being a valuable person to the story line who could have been so much more interesting, we are given a token player whose defining feature is that she feels like a woman when the sun is out and he feels like a man when it's cloudy. They also seem ready to fall in love with almost any other character at any time. Dumb and distracting. Jeri says at one point in the story that pronouns are a lazy way of addressing people...but then spends the rest of the book being honored (or not) when people check (or don't check) the sky to see how to address him/her. A whole chapter explaining gender fluidity with Scythe Anastasia is really NOT necessary and does nothing to advance the story.

With the addition of the extra characters and story lines, the book felt like a book of short stories versus a novel. Sort of disjointed and jarring. I would just sort of get a handle on what was going on and then we switch points of view. Then one POV would randomly disappear for hundreds of pages and reappear at the end. At least one major character from the past books just punks out lamely for almost the entire book, like the author just didn't care to continue writing about a character that he spent time developing and making into somebody who was actually interesting.

I wanted to love this book like I did the other two books. I approached with interest and excitement and really looked forward to sharing it with others. I wish it had been edited better, or maybe not had so much new material. It is a drastically different book from the first two. I wish the end didn't feel like such a cop out.

Overall, I wish that authors (and maybe this is a thing publishers are insisting upon, I don't know) would just STAAAAP with the social justice lecturing because great stories can be told without it. We read to escape the world, and we receive more than enough lecturing from everyday media. This is starting to invade almost ALL of the YA novels I've been reading lately, to the point where I think I may stop buying new releases. Note to publishers: if you want to sell books to people, maybe try not to disappoint the people who are actually spending money on your product.
Meer lezen
59 mensen vonden dit nuttig
Vertaal recensie in het Nederlands

shannon
1,0 van 5 sterren Could have done this subtly but made it political instead
8 november 2019 - Gepubliceerd op Amazon.com
Geverifieerde aankoop
Wth I've loved this series its been supper imaginative ... But then you like 3 other authors now on the last book of a 3 book series right at the end blindsiding every1 had to push this gender fluid b.s. and I'm sick of it authors writing 1 way and in the last book going out of their way 2 push gender identity twisting transgender into something else it wasn't necessary and it was intentional you could have done this subtly having the person called him at night and her at daylight but u had 2 explain it and include child abuse....for real not cool
Meer lezen
53 mensen vonden dit nuttig
Vertaal recensie in het Nederlands

C. Bray
2,0 van 5 sterren Great series until this last book!
12 november 2019 - Gepubliceerd op Amazon.com
Geverifieerde aankoop
You know when an author wants to make a political point so badly that he finds a way to insert his agenda in the book, but it doesn't flow with the story and is overdone. Yes, that happened here. It could have been done subtly and in a way that fit with the story, but it felt more like he wanted to hit us over the head with a sledgehammer. It got in the way and It was annoying, Not a great end to a great beginning.
Meer lezen
47 mensen vonden dit nuttig
Vertaal recensie in het Nederlands

Murphy
1,0 van 5 sterren Extraordinarily disappointed in the author...
8 november 2019 - Gepubliceerd op Amazon.com
Geverifieerde aankoop
I am disgusted that the author would push gender fluidity in a book that I had planned on letting my children read. I suppose it's never too early to teach my children about mental illness. And seriously, a book geared towards middle school and high schoolers that uses the Lord’s name in vain? Wow.. simply shameful. And to too it off, the series was more or less a mess after book 1... Literally, I felt embarrassed for the author and saddened for the middle school and high schoolers that are being corrupted with this mess. At is truly embarrassing. What was the author thinking? Really, the character decides to be male when it's clear out and female when it's cloudy? That is utterly silly.

You really have to check your brain at the door. I door with this book. Humankind’s response to what Goddard is doing is utterly preposterous. The response would have been immediate. The fact that no one had dug deeper into the moon or Mars colonies... absolutely unbelievable. It really is a mindless conclusion to a once promising series.
Meer lezen
54 mensen vonden dit nuttig
Vertaal recensie in het Nederlands

Sean
5,0 van 5 sterren Amazing conclusion to one of my favorite series
5 november 2019 - Gepubliceerd op Amazon.com
Geverifieerde aankoop
This book was everything I wanted it to be. And that's saying something. If you liked the previous two, this one goes in a lot of really interesting directions, not exactly where I expected, and brings everything to a nice conclusion. Now I'm just waiting for the movie.
Meer lezen
31 mensen vonden dit nuttig
Vertaal recensie in het Nederlands
Ga naar Amazon.com om alle 222 recensies te bekijken 4,4 van 5 sterren
Terug naar boven
Over ons
Verkoop bij ons
We helpen je graag
© 1996-2020, Amazon.com, Inc. en dochterondernemingen