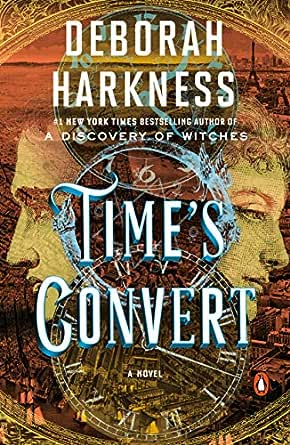 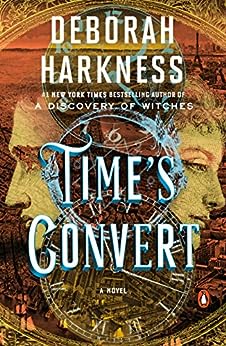 "Harkness brings her keen historian's eye to the American and French revolutions, drawing parallels between the two periods through not only the vampire witnesses to history but the appearances of historical figures: the Marquis de Lafayette, Benjamin Franklin and Thomas Paine."
--Los Angeles Times "In Time's Convert, Deborah Harkness, the author of A Discovery Of Witches, spins a tale of life-ever-after, romance, and family drama, and it is gloriously entertaining."
--Bustle "This vampire book is set during the American Revolution, when a young man named Marcus MacNeil is offered a chance to escape his puritan upbringing (boring!) and become immortal (fun!). From the bestselling author of A Discovery of Witches."
--New York Post "Ever wonder what it really takes to be a vampire? Let Deborah Harkness, New York Times bestselling author of A Discovery of Witches, give you a taste in her latest novel . . . a passionate love story."
--PopSugar "Effortlessly sweeping across time and continents . . . Harkness replaces the captivating Matthew and Diana dynamic with a passionate new love story."
--Booklist

From the #1 New York Times bestselling author of A Discovery of Witches—now a hit TV series on AMC and BBC America, and streaming on Sundance Now and Shudder—comes a novel about what it takes to become a vampire.

On the battlefields of the American Revolution, Matthew de Clermont meets Marcus MacNeil, a young surgeon from Massachusetts, during a moment of political awakening when it seems that the world is on the brink of a brighter future. When Matthew offers him a chance at immortality and a new life free from the restraints of his puritanical upbringing, Marcus seizes the opportunity to become a vampire. But his transformation is not an easy one and the ancient traditions and responsibilities of the de Clermont family clash with Marcus's deeply held beliefs in liberty, equality, and brotherhood.

Fast-forward to contemporary Paris, where Phoebe Taylor--the young employee at Sotheby's whom Marcus has fallen for--is about to embark on her own journey to immortality. Though the modernized version of the process at first seems uncomplicated, the couple discovers that the challenges facing a human who wishes to be a vampire are no less formidable than they were in the eighteenth century. The shadows that Marcus believed he'd escaped centuries ago may return to haunt them both--forever.

A passionate love story and a fascinating exploration of the power of tradition and the possibilities not just for change but for revolution, Time's Convert channels the supernatural world-building and slow-burning romance that made the All Souls Trilogy instant bestsellers to illuminate a new and vital moment in history, and a love affair that will bridge centuries.

BookReader
3,0 van 5 sterren I hate to say that I was disappointed
20 september 2018 - Gepubliceerd op Amazon.com
Geverifieerde aankoop
I was so excited for this book to come out. I even read the first couple of chapters when it appeared on my Kindle after midnight. I loved the trilogy so much and re-read it recently so that everything was fresh in my mind. I loved Marcus. I couldn't wait to find out how his relationship with Phoebe developed from the meeting at Sotheby's when he bought Diana and Matthew's miniatures. I was beyond impatient to read how their epic love story unfolded. Finally, when my Kindle was at about 85%, I realized it wasn't happening. Honestly, 36+ hours later, I am still really deflated and upset about it. Actually, as I write this, I'm getting riled up again, and more depressed. I mean, when else will we find out all those details? Not in another book, right? We don't even see them as a couple until the end. None of the care taken building Matthew and Diana's relationship is there. Their connection is so deep and layered and romantic and intricate. Not so with Marcus and Phoebe. Why do Phoebe and Marcus love each other? What was so deep, everlasting and special about their relationship that convinced Phoebe to turn into a vampire? It's like a whole BIG section is missing from the book. And, outside of the missing relationship, there's also no real path or connection for Marcus to the present after New Orleans -- we're just left in the dark after his chastisement for the next 200+ years to modern day. And we really know nothing about Phoebe except for a few comments about painting and ballet and her upper-crust upbringing. Wouldn't it have been interesting to actually read about her telling her family Marcus is a vampire and oh, she's going to turn into one instead of meeting them when they already know and she's saying goodbye/goodnight before the process begins?
I feel terrible complaining because the book is beautifully written and the attention to history and detail is phenomenal. I was counting the days and minutes until this released. And I loved, loved, loved the twins and glimpses into Matthew and Diana's continuing life. Maybe this book tried to satisfy too many themes? On another note, I love Gallowglass and want him to find his true love -- but now that I've been disappointed by Marcus and Phoebe, will he get a chance? He so deserves it. But will the same lack of attention happen?? That's what I'm afraid of! I'm going to give myself a little while to cool off and read it again. Maybe I missed something?

j bailey
1,0 van 5 sterren Disappointing transition piece
20 september 2018 - Gepubliceerd op Amazon.com
Geverifieerde aankoop
Loved all souls--which grabbed you from the beginning. In this book, nothing happens. We already knew phoebe planned to become a vampire. And she did. We already knew Marcus was in the revolutionary war and lived in Nola. Now we know more but care less. This author is better than this series of historical vignettes. Maybe something will happen in the next book, but I won't buy it the day it comes out...will wait for reviews. This is all background info and no story.
Meer lezen
109 mensen vonden dit nuttig
Vertaal recensie in het Nederlands

CA
3,0 van 5 sterren For All Souls Trilogy fans only, but sadly not up to its standards
20 september 2018 - Gepubliceerd op Amazon.com
Geverifieerde aankoop
If you’re expecting another great book similar the All Souls Trilogy (in terms of storyline, action and character development) you will likely be somewhat disappointed. The book doesn’t really get interesting until around page 200. The back story on Marcus is at times quite tedious and feels a bit like a vanity piece for the author to write about the American and French Revolutionary periods. All that said, the last half of the book is entertaining and a fairly fun read. It was interesting to read about Phoebe’s transformation and revisit with Diana and Matthew a couple of years post-Book of Life. However, there’s really not much of a compelling storyline here and the author struggles to pull together 3 story ideas into one cohesive book. If you loved Shadow of Night, you are more likely to enjoy this book, given the focus on historical references and atmosphere.

I’m still a big fan of Deborah Harkness, but this book lacked the sparkle of her other brilliant efforts.

v
3,0 van 5 sterren After waiting so long for this book to come out I must admit I am disappointed
19 september 2018 - Gepubliceerd op Amazon.com
Geverifieerde aankoop
I gave 3 stars and I feel like that is generous. After reading all the books that came before this one, it seemed rather flat.
Meer lezen
64 mensen vonden dit nuttig
Vertaal recensie in het Nederlands
Ga naar Amazon.com om alle 953 recensies te bekijken 4,3 van 5 sterren
Terug naar boven
Over ons
Verkoop bij ons
We helpen je graag
© 1996-2020, Amazon.com, Inc. en dochterondernemingen