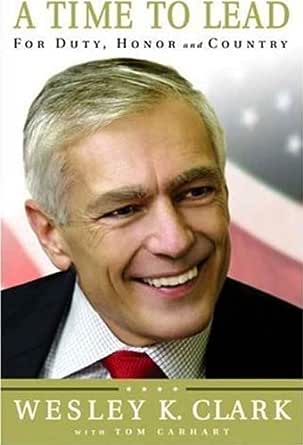 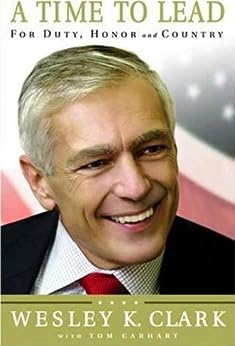 A Time to Lead: For Duty, Honor and Country (English Edition) Kindle-editie

Patricia K. Spiegel
5,0 van 5 sterren Wonderful Book
7 september 2007 - Gepubliceerd op Amazon.com
Geverifieerde aankoop
I read this book in only two sittings because I was anxious to see how a man who faced some severe challenges as a child and almost died in Vietnam could go on to become a great leader and American hero. It is a wonderful story of commitment and love of country as well as the lifetime love of one woman.

I TOTALLY DISAGREE with the snarky last sentence of the Publisher Weekly review (at the top). In fact, I am giving copies of this book to my younger friends and family members who truly want to do something with their lives, but don't exactly know what that might be or how to go about it. This isn't to say that the book is a recipe for how to become a 4 Star General or something as spectacular, but rather how to experiement with one's strengths (and weaknesses) and the focus on the goals that emerge from such a journey. Perhaps without being fully aware of it, Clark gives hints for all of us about how to be the best we can be, and reveals more about himself than I was expecting. The road isn't always easy. There will be setbacks. But one just keeps at it, and success can be the outcome.

I loved this inspiring book.

Stanley Davis
5,0 van 5 sterren Stories from the life of Wesley Clark and the lessons they teach
4 september 2007 - Gepubliceerd op Amazon.com
Geverifieerde aankoop
The book could easily be subtitled, "Stories from my life and the lessons they teach," for that is the basic structure of the book. In chronological order, except for the Preface, in which he relates the incident in which he was wounded in Viet Nam, Gen. Clark tells stories of his life and then completes each chapter with the lessons those stories have taught him--lessons for life and lessons on leadership. The final chapter applies those lessons to articulate a vision for America, for governance, and a path to follow for the 21st century.

Most of the stories he tells will be familiar to the avid Clark supporter community, but we've never heard them in his own words before, and in some cases in as much detail. The personal touch and the insights he provides bring the stories alive in his straightforward--dare I say simple?--language. It's an easy read, but the message is deep, but not complex.

If there was any disappointment in my reading of the book is that he downplays his own achievements, accomplishments, and uniqueness as a public servant, soldier, scholar, and leader. While his brilliance shines through the prose, he goes out of his way to avoid making him the star of the narrative. For example, his account of the Mt. Igman tragedy in Bosnia leaves out the danger and personal risk he undertook in making his rescue attempt. And there are almost too-casual mentions of his being number one in his class at West Point and his selection as a Rhodes Scholar. He omits altogether the praise that has been lavished on him in his formal Army evaluations and in other, less formal ways.

His mission in writing the book was to teach. The stories are necessary to understand the significant events in his life that have shaped who he is, led him to his beliefs, developed his character, and instilled the principles that guide him still. Extracting the leadership lessons from the stories and putting them all in one place could be used as the basis for a day-long seminar on principled leadership.

I didn't get the impression that he was touting his own leadership traits or promoting himself for his own purposes. Rather, I think he was hoping that others would internalize the lessons he teaches and adopt the same principles. He seems to think that the country has a dearth of such leaders and would like to develop more of them in all walks of life.

Readers of Clark's third book should enjoy it at at least two levels: the stories themselves as a compelling and often poignant narrative, and the points to ponder in developing leaders to take America to the places she should go in the future.
Meer lezen
51 mensen vonden dit nuttig
Vertaal recensie in het Nederlands