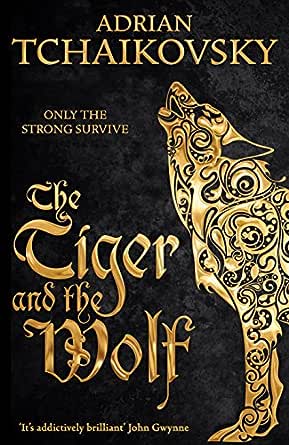 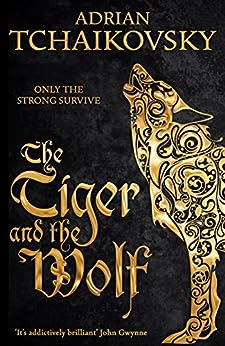 "It's addictively brilliant! The protagonist is vivid and sympathetic--and I love both the story and the world Adrian has created. It's meticulously thought out and utterly believable." --John Gwynne, author, Ruin

"Those who enjoy coming-of-age stories, a natural setting, and strong characters will greatly enjoy this story." --Booklist

The first novel in the Echoes of the Fall series, The Tiger and the Wolf is an accomplished high fantasy by Adrian Tchaikovsky, and winner of the 2017 British Fantasy Award for Best Novel. Adrian Tchaikovsky is also the author of the Arthur C. Clarke award-winning Children of Time.

In the bleak northern crown of the world, war is coming . . .

Maniye's father is the Wolf clan's chieftain, but she's an outcast. Her mother was queen of the Tiger and these tribes have been enemies for generations. Maniye also hides a deadly secret. All can shift into their clan's animal form, but Maniye can take on tiger and wolf shapes. She refuses to disown half her soul so escapes, rescuing a prisoner of the Wolf clan in the process. The killer Broken Axe is set on their trail, to drag them back for retribution.

The Wolf chieftan plots to rule the north and controlling his daughter is crucial to his schemes. However, other tribes also prepare for strife. Strangers from the far south appear too, seeking allies in their own conflict. It's a season for omens as priests foresee danger and a darkness falling across the land. Some say a great war is coming, overshadowing even Wolf ambitions. A time of testing and broken laws is near, but what spark will set the world ablaze?

Winner of the British Fantasy Award for Best Fantasy Novel.

Continue this sweeping coming-of-age fantasy with The Bear and the Serpent.

Ben H.
5,0 van 5 sterren An engaging coming-of-age adventure story set in a world of human-animal ribes
10 augustus 2017 - Gepubliceerd op Amazon.com
Geverifieerde aankoop
Tchaikovsky's world in The Tiger and the Wolf is not an idyllic medieval place associated with classic fantasy. Primarily filled with tribal peoples with pre-Iron Age technologies in a hard environment, it is a fresh-feeling backdrop for an adventurous tale that kept me glued to the book. The plot benefits from its familiar concept of a young person struggling for freedom and individual identity, but the author avoids played out tropes. The fantasy enriches a narrative that is not dependant on it—the actual dragon is a relatively minor character.

More welcoming than anything else, the story is intelligently told, its plot unfolding with excellent timing and well orchestrated pacing. I cared for the characters and was always eager to continue reading.
Meer lezen
11 mensen vonden dit nuttig
Vertaal recensie in het Nederlands

M. White
5,0 van 5 sterren Spunky girl faces adversity
11 juni 2018 - Gepubliceerd op Amazon.com
Geverifieerde aankoop
My description of the book does it no justice: A small but fierce little girl tries to overcome her dominating father and is helped by a motley crew of characters. Everyone happens to morph into specific animals. The author builds worlds so alien and yet believable. The characters and cultures have their virtues and flaws, some more of one than the other, in a way that makes them all too real. There is tragedy and hope, loyalty and betrayal. I look forward to more!
Meer lezen
7 mensen vonden dit nuttig
Vertaal recensie in het Nederlands

Eden
5,0 van 5 sterren Amazing Worldbuilding
9 november 2018 - Gepubliceerd op Amazon.com
Geverifieerde aankoop
This was fantastic. Read it. Now. There was so much to like about this book. I highly recommend it.

Obviously, the most compelling thing about The Tiger and the Wolf for me was the worldbuilding. The setting, which some authors can be so lazy about, was really pivotal in this novel as the main character travels around quite a bit. And it just came alive. It was like I could touch it, like I had known it all my life and could navigate it like the back of my hand. Very impressive.

The characters were fully defined and interesting. Each had their own perspective and stayed true to their beliefs. This made the plot so much fun because it was unpredictable, just the way that you can't always predict the way people in real life will act and react.

Joe
5,0 van 5 sterren It's not a typical story
23 januari 2017 - Gepubliceerd op Amazon.com
Geverifieerde aankoop
Only seeing six reviews (at the time of writing this) after I finished it, made me sad to see this book hasn't gotten more people invested. It's almost criminal seeing people passing over this thinking it's another typical "medieval" story, because it's not, it's nothing like that.

What this book has/is:

1) Balanced adventure; This isn't a war story, romance novel or thriller. I say balanced as is in, it's not a book that goes "Here's a new setting and trial, conquer it then move on to the next." It takes just the right amount of time at each stop in the story before moving forward and most of the time it flows naturally.

2) Slow-building (some might say realistic, don't confuse with ponderous) character progression. I find this extremely important, characters show the right amount of doubt, anxiousness and naivety. Especially naivety, nothing breaks story immersion more than you thinking "Why would you stick around?!"

3) Good story; It has some slight pacing problems and some things move at a different pace than the rest of the book. I won't say at which part of the book it does this, because you might not even notice it. This whole thing is opinion after all.., but the story is great.

4) Interesting setting; contains few tropes and when they do appear it's often in strange combination with other original ideas. It displayed interesting ideas about tribalism and religious connections with their respective gods. It's complete high fantasy but it feels more grounded than a lot of other books in the same genre (i.e. no super powerful beings, wizards, main character doesn't become godlike, etc..)

5) Length; This book sets out to tell a story, you won't be let down by a book that suddenly ends to sell a dozen sequels. There is a sequel coming mind you, but this book is complete. You get your moneys worth.

IN SHORT:
So yeah, it's not a perfect book, but it's realllly good. Don't let the little niggles I mentioned deter you. It's an A++ adventure story in which after I finished reading the eBook version, promptly order it in hardback for my private collection.
Meer lezen
15 mensen vonden dit nuttig
Vertaal recensie in het Nederlands

Louis L. Cornell
4,0 van 5 sterren Tchaikovsky's shape-changers inhabit a dangerous and absorbing world
13 augustus 2017 - Gepubliceerd op Amazon.com
Geverifieerde aankoop
I found this an interesting and absorbing departure from the Shadows of the Apt series. Unlike the earlier books, "Tiger" focuses on a few characters, especially Maniye, the protagonist, with less varied and imaginative turns of the plot than in the epic tales of the Apt. My only reservation is that the action, such as it is, is spread too thin: there's a somewhat repetitive quality to the characters' adventures that makes me wish Tchaikovsky had tightened up the story. On the other hand, the interactions among the characters are handled beautifully - the shape-changers of Tchaikovsky's world are constantly faced with difficult choices as well as threatening enemies, so that more of the interest arises from their inner lives than from the somewhat over-described scenes of physical combat. Still, reservations apart, it's another fine Tchaikovsky page-turner.
Meer lezen
3 mensen vonden dit nuttig
Vertaal recensie in het Nederlands
Ga naar Amazon.com om alle 42 recensies te bekijken 4,2 van 5 sterren
Terug naar boven
Over ons
Verkoop bij ons
We helpen je graag
© 1996-2020, Amazon.com, Inc. en dochterondernemingen