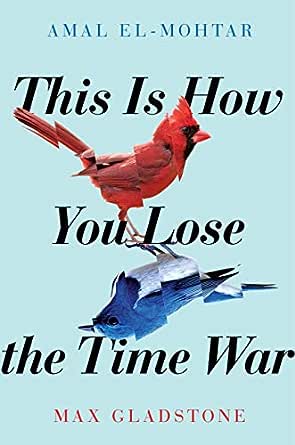 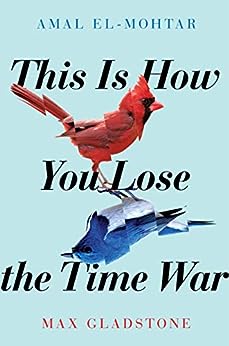 This is How You Lose the Time War: an epic time-travelling love story (English Edition) Kindle-editie

"This Is How You Lose the Time War is rich and strange, a romantic tour through all of time and the multiverse, and you shouldn't miss a moment."--Martha Wells, Hugo Award-winning author of The Murderbot Diaries

"Poetry, disguised as genre fiction. I read several sections out loud -- this is prose that wants to be more than read. It wants to be heard and tasted."--Kelly Sue DeConnick, author of Captain Marvel

"A time travel adventure that has as much humanity, grace, and love as it has temporal shenanigans, rewriting history, and temporal agents fighting to the death. Two days from now, you've already devoured it."--Ryan North, New York Times Bestselling and Eisner Award winning author of How To Invent Everything: A Survival Guide For The Stranded Time Traveler

"This book has it all: treachery and love, lyricism and gritty action, existential crisis and space-opera scope, not to mention time traveling superagents. Gladstone's and El-Mohtar's debut collaboration is a fireworks display from two very talented storytellers."--Madeline Miller, award-winning author of Circe

"Seditious and seductive, lush and lustrous, allusive and elusive, THIS IS HOW YOU LOSE THE TIME WAR is one of those rare stories where one struggles to decide whether to heap more praise upon its clever structure and prose or its brilliant ideas and characters."
--Ken Liu, author of The Grace of Kings and The Paper Menagerie and Other Stories

Tenderness, danger, daring, wit -- Time War has them all... In other words, these pages are strewn with myriad delights.--Nisi Shawl

Co-written by two award-winning writers, This Is How You Lose the Time War is an epic love story spanning time and space.

Among the ashes of a dying world, an agent of the Commandant finds a letter. It reads: Burn before reading.
Thus begins an unlikely correspondence between two rival agents hellbent on securing the best possible future for their warring factions. Now, what began as a taunt, a battlefield boast, grows into something more. Something epic. Something romantic. Something that could change the past and the future.

Except the discovery of their bond would mean death for each of them. There's still a war going on, after all. And someone has to win that war. That's how war works. Right?

'Rich and strange, a romantic tour through all of time and the multiverse' Martha Wells, Hugo and Nebula Award-winning author of The Murderbot Diaries

Lee Crittenden
1,0 van 5 sterren This is mostly nonsense
22 september 2019 - Gepubliceerd op Amazon.com
Geverifieerde aankoop
Reader beware. This has gotten a lot of glowing official reviews and the book blurb sounds great, but it's just an art piece. The characters and plot are both so vague that you can't connect with it, and a few references to Romeo and Juliet don't make up for that.
Meer lezen
52 mensen vonden dit nuttig
Vertaal recensie in het Nederlands

superstardrifter
5,0 van 5 sterren Beautifully written!
16 juli 2019 - Gepubliceerd op Amazon.com
Geverifieerde aankoop
This book is absolutely beautifully written, for starters. It’s also often indescribably weird… but not in a bad way. Not at all.

This book basically follows two agents from rival sides in a war across time as they communicate with each other, becoming closer with each letter.

Most of the letters are very uniquely presented, whether in tea leaves, or lava from an erupting volcano about to engulf Atlantis, and so on and so forth. They are in different periods of time, or places on Earth, some of which only happened in some times, and some of which did actually occur in our own timeline, and Red, an agent of The Agency, and Blue, an agent of Garden, always just miss each other, or are observed from afar by the other.

Red and Blue are both strange and interesting people. They are human, or, at least humanoid (most of the time. At least one of them is a shapeshifter, you see). Both female, and both either genetically modified and grown, decanted, and heavily modified with cybernetic implants.

So, it is obviously super unique, and it was, in fact, unlike anything I’ve ever read in my life. Seeing these two women get closer and closer, and their letters get more and more intimate as the book goes on was really, really enthralling. The letters were absolutely stunningly written (but then, so were the parts between them), and I was clamoring for the next one and the next one as the book went on.

There were times that I would have literally no idea what was going on, but, and this is going to sound odd, but stay with me here… it was all part of the experience.

“What is the value of pi to sixty-two decimals?”
“‘The sedge is withered from the lake, / And no birds sing.'”
A fistful of snow skitters across Siri’s face. “If train A leaves Toronto at six p.m. travelling east at one hundred kilometers an hour, and train B leaves Ottawa at seven p.m. travelling west at one hundred twenty kilometers per hour, when will they cross?”
“‘Lo! the spell now works around thee, / And the clankless chain hath bound thee; / O’er thy heart and brain together / Hath the word been pass’d—now wither!'”

This is only part of the scene, but what is basically happening here, is that Blue is responding to mathematical problems by quoting famous poems (Keats and Lord Byron in this case).

But I have no idea why! There is no explanation to why poetry is the solution to math problems in these riddles, only that they are, and that’s just how it is. And at first, I will admit that I stumbled on it, haaard. “What the fffuu-” said I, at first. But I shrugged it off as a weird book being weird and continued on reading. When I finished, and started writing this review, I looked up that quote on my kindle again and was like ‘Heh… awesome.” like it wasn’t the most random event ever. It was just… part of the whole.

So this book isn’t going to be for everyone, but it was certainly for me, in the end, even if I had to take a bit of time in the beginning to really get my bearings on what exactly was happening. I really enjoyed this book, but like I have no idea why poetry solves math, I have no idea what it was about it (other than the beautiful writing, good gods) that captured me and wouldn’t let me go. But that’s what happened.

Thanks to the authors, as well as Saga Press via NetGalley for the review copy.
Meer lezen
32 mensen vonden dit nuttig
Vertaal recensie in het Nederlands

Marzie
5,0 van 5 sterren Imaginative and lush...
20 juli 2019 - Gepubliceerd op Amazon.com
Geverifieerde aankoop
Readers of the blog know how much I love Max Gladstone's works (The Craft Sequece and Empress of Forever) and will no doubt recall my strong praise for Amal El-Mohtar's Hugo, Nebula, Locus, Sturgeon-winning short story Seasons of Iron and Glass, in my Hugo nominations post from 2017. Thus, it's hardly a surprise that one of my most anticipated reads for 2019 has been this novella. But it might seem like a stretch since I'm not usually a fan of co-written works, spy novels, or epistolary novels. The unique structure of this novella (more on that account on the actual blog review post) takes every advantage of the writers differing styles. Anyone who has followed these authors' writing, social media, or games (yes, games- Max Gladstone has written some pretty cool games) will know which character is written by which author.

Time War tells the story of Blue and Red, two agents who are on opposite sides of the titular time war, a temporal battle that finds them traveling on the strands of time through history and place. From the myriad Atlantises that Red despises to the perfect London Blue loves and to which other Londons can only aspire, we travel with these two agents and read letters that begin as taunts but which evolve into the deepest of bonds- love and respect. Red, in all her earnest lethality, is enriched (infiltrated? flipped?) by Blue's appreciation of the niceties of tea, honey, fine writing paper, scented ink, and her philosophical approach to a war that rapidly becomes secondary to their obsessive relationship with one another. Red and Blue are in some ways trapped in the battle between the technotopia known as the Agency, and the vast organic consciousness known as the Garden, having to cover their tracks to obscure their growing bond and their growing questions about what winning the time war would really mean. What if winning a war could cost you everything you care about most? Where do their loyalties lie? Can they find a way to game the system they are entangled in, and change the paradigm of their leaders' respective wars? Is there a way to win?

Full of deft writing, terrible puns, love, heartbreak, and hope, This is How You Lose the Time War is a beautiful novella, unlike anything I've ever read. It's going to receive great acclaim and a slew of award nominations, as it deserves.

MKNaga
2,0 van 5 sterren Predictable and Sugary
19 november 2019 - Gepubliceerd op Amazon.com
Geverifieerde aankoop
This is a clever book, for sure, but maybe that it's problem. It became predictable very quickly and also the shifts in setting made it difficult for me to feel attached to either character as I was trying to locate the story in space and time all the time. These characters did not come alive for me and I never started caring for them. The romance was too easy, I feel. Not enough complications here. Although the final twist was quite good, on the whole this was not as good as I expected.
Meer lezen
7 mensen vonden dit nuttig
Vertaal recensie in het Nederlands
Ga naar Amazon.com om alle 194 recensies te bekijken 4,3 van 5 sterren
Terug naar boven
Over ons
Verkoop bij ons
We helpen je graag
© 1996-2020, Amazon.com, Inc. en dochterondernemingen