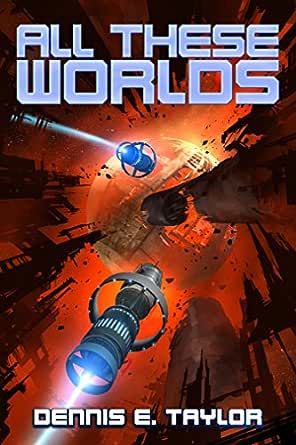 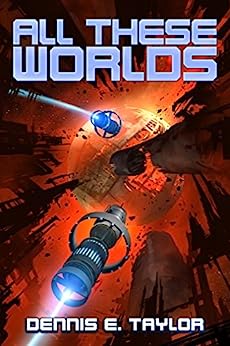 Bobiverse fans: a signed limited edition of all three books in a boxed set, signed by the author, is now available on Amazon. Look for The Bobiverse [Signed Limited Edition] on Amazon

Being a sentient spaceship really should be more fun. But after spreading out through space for almost a century, Bob and his clones just can't stay out of trouble.

They've created enough colonies so humanity shouldn't go extinct. But political squabbles have a bad habit of dying hard, and the Brazilian probes are still trying to take out the competition. And the Bobs have picked a fight with an older, more powerful species with a large appetite and a short temper.

Still stinging from getting their collective butts kicked in their first encounter with the Others, the Bobs now face the prospect of a decisive final battle to defend Earth and its colonies. But the Bobs are less disciplined than a herd of cats, and some of the younger copies are more concerned with their own local problems than defeating the Others.

Yet salvation may come from an unlikely source. A couple of eighth-generation Bobs have found something out in deep space. All it will take to save the Earth and perhaps all of humanity is for them to get it to Sol — unless the Others arrive first.

Brian
5,0 van 5 sterren Perfect high note to send off Bob on
22 januari 2018 - Gepubliceerd op Amazon.com
Geverifieerde aankoop
Its hard to end a series. All the love and time and dedication that goes into growth and development and expansion. And so while I'm sad that the ride is over, I'm very happy its gone out with a bang as opposed to lamenting that it should've ended a few books ago.

Bob, mark 7.4.2, is up to several Bob-gross, and has a military as well as a bio research arm and an R&D arm, continue to explore the socio-ethical dilemmas of being "not-human," the political force he exhibits, and the simple neuroses of being a human mind in a machine.

Character development is slowly drawing to a close, as there are very few elements left unexplored. While theres a lot left to discuss in terms of world growth and development, and is quickly becoming interchangeable. The remaining human villains are handled nicely, and the space warfare discussion.

Overall, a wonderful and thought provoking swan song. There're very few threads left untied, a few happy endings and a few satisfying ones, but not all endings in life are happy. I'd have liked to have seen one more book, but its hard to argue with how well this entire ending clicked together.

Reasonable Reviewer
5,0 van 5 sterren The best of the three books and a grand finale
14 augustus 2018 - Gepubliceerd op Amazon.com
Geverifieerde aankoop
After book two, I went into Book 3 with some reservations.

I have the advantage or the disadvantage of writing this review after a lot of other folks (as opposed to the Others) have written reviews.

Here is a quick summary (without spoilers). Bob learns to embrace what he has become, and not what he was. The Bob-i-verse is all about doing whatever you want without time constraints and few physical limitations. Bob is no longer human, and in this book he embraces what he might be in all of its variegated forms.

By the end of the book, the major plot issues (minus one) from the previous books have been addressed in a final way, and you are reasonably happy with where the author leaves things off.

While there could be further books in the Bob-i-verse, it seems unlikely, and as a reader, I am fine with where things are left.

Now to respond to a few criticisms of the book by other reviewers.

(1) The timeline is confusing. Yes, you're right. It certainly can be. I listened to the audiobook version and did not have a piece of paper handy to write down times and events, but that probably would have been useful. At times, I had to stop the book audio and think, "that does not make sense in light of last chapter," and then realize that the events of the last chapter did not happen yet for the Bob in this chapter. Given that there were several hundred Bobs by the end of the book and they were spread across several thousand cubic light-years, it would have been tough to portray unless Dennis had done it "Game of Thrones" style. A few chapters are done that way, the ones surrounding the battle at Earth include several chapters that occur near simultaneously.

(2) The battle with the Others and the final solution of the Others is anti-climactic. Um, you have not sold me on this one. The entire book leads up to the big battle in Sol, and in a way, Bob is both clever and lucky to win against the Others in Sol. Bob's cheaty knowledge of physics comes to the rescue, and Dennis does remind us repeatedly that the Others are very arrogant. The Bobs very nearly lost the battle for Sol.

As to the final destruction of the Others in their home system, the "Hail Mary" play is telegraphed in an early chapter, and every so often we return to the pair of Bobs on the crazy mission. We know that the Others have only colonized one system, and if that system can be wiped out then they are done.

The solution, hurl planets into their sun at true relativistic speeds and cause a nova, is a fairly clean, scientific approach as opposed to space opera, but it makes sense in light of the Bob-i-verse, and Dennis did leave us some hints in the earlier books.

(3) Bob would not just abandon humanity at the end of the book. Yes, that seemed a bit implausible to me too. That said, all the Bobs did not leave humanity. Some stayed around to patrol the skies around the colonies. Some continued to work on biospheres. Other Bobs raised families. All in all, it seemed reasonable that some of the Bobs would head out to explore new worlds.

Those were the main objections I saw.

In this book, the Others are beaten at Sol (barely), and their home system is destroyed by causing their sun to nova.

Bob moves on from Eden after living for twenty years as a Deltan in an android body. Once his last Deltan friend dies, Bob is ready to move on from mortality. Bob's lack of a family as a human drives him to seek closure for the family need in the early part of his immortality. This arc made sense to me.

There is only one additional replicant made, and that is one of Bob's human sweethearts. The book explains that serving mankind in the afterlife seems like a burden. So, ipso facto, no one wants to become a replicant.

I'm not sure that I buy that. Dennis deals with religion obliquely and mostly negatively. If you eliminate a religious afterlife then my gut says that many, many people would seek to live on as replicants. No strike, no foul though.

There were plenty of Bobs by the end of the book.

Yes, true, Dennis never did eliminate the evil Brazilian replicants. Yes, that is an annoying, hanging thread, but the Bob-i-verse is robust and more than able to deal with the one annoying antagonist.

At the end of the book, in the final Moot, the Bobs essentially agree that they no longer feel obligated to defend humanity. It is a non-binding resolution, just a general feeling that is codified and passed along to the human colonies. Still, at the end of the book, there are still many Bobs working on helping humans out.

The last scene is of original Bob visiting the ice covered glacier that was Las Vegas and bidding farewell to Bill and Will, his first copies.

By the end of the final chapter, Dennis had closed out the Bob-i-verse, and I was OK with saying good-bye.

That is a fine way to end a trilogy.

Tghu Verd
4,0 van 5 sterren Beam me up, Bobby
13 augustus 2017 - Gepubliceerd op Amazon.com
Geverifieerde aankoop
I've really enjoyed traversing the Bobiverse, but I felt Book 3 was the most choppy in that we keep skipping between vignettes and they felt, for the most part, quite short. So it's a story told in snippets, which the previous book did as well, but it just felt rushed. It was also limited to only a score of the hundreds of Bob's, and I was left wondering what the rest of them were doing...or going to do.

Still, the war with the Others, Bob's subtle stewardship of the Deltan's and the race to ship millions off Earth before they starve was engaging stuff. Taylor maintains his 'helpful despite themselves' approach to how Bob et al find politics, with the continually ungrateful response from us ephemeral's eroding the generally helpful attitude of the Bob's and particularly those who are some generations down the line.

What was a little weird was the encounter with the Brazilian, which was a sidebar of little import apart from adding a touch of tension to resource allocation. But as resource constraints have been a constant, it was merely more of the same so did not add much for me. Way more strange is the reluctance of pretty much **anyone** to upload to a VR rig. Like, out of millions of people, nobody wants to extend their life as a computer incarnation? It's has consistently made no sense to me, and it made even less sense in this one given that most of humanity is living in less than ideal conditions as galactic refugees on planets other than Earth.

Anyway, those niggles aside, Book 3 draws everything to a nice conclusion, leaves some tasks outstanding so there may be another book in the offing, and is of equal fun to the previous two. I enjoyed it, even if it felt that Taylor has exhausted the 'how being a Bob gives me a perspective on humanity' theme that really drove Book 1 so successfully.
Meer lezen
8 mensen vonden dit nuttig
Vertaal recensie in het Nederlands
Ga naar Amazon.com om alle 1.120 recensies te bekijken 4,7 van 5 sterren
Terug naar boven
Over ons
Verkoop bij ons
We helpen je graag
© 1996-2020, Amazon.com, Inc. en dochterondernemingen