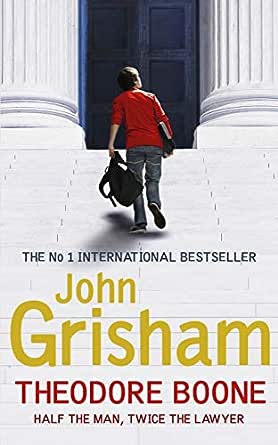 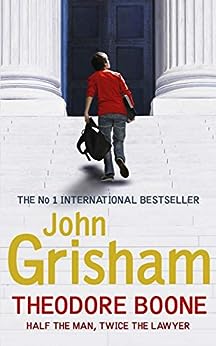 "Not since Nancy Drew has a nosy, crime-obsessed kid been so hard to resist." -"The New York Times"

Half the man, twice the lawyer.

In the small city of Strattenburg, there are many lawyers, and though he's only thirteen years old, Theo Boone thinks he's one of them. Theo knows every judge, policeman, court clerk - and a lot about the law. He dreams of being a great trial lawyer, of a life in the courtroom. But Theo finds himself in court much sooner than he expected. Because he knows so much - maybe too much - he is suddenly dragged into the middle of a sensational murder trial. A cold-blooded killer is about to go free, and only Theo knows the truth. The stakes are high, but Theo won't stop until justice is served.

What readers are saying about THEODORE BOONE

'I thoroughly enjoyed the story' - 5 stars

Laurie G
5,0 van 5 sterren AWESOME!
14 december 2018 - Gepubliceerd op Amazon.com
Geverifieerde aankoop
I first have to say that after finishing this book, I went to look at book 2, which is where I saw that this is a series designed for tweens/teens! LOL...I'm 58 years old and had just finished a 4 book series by Greg Isles that was about 3200+ pages total with a lot of characters! Excellent series, but I needed something less intense to read yet would keep my attention! Grisham is an excellent writer and I have read some of his adult books as well. That being said, I loved this book! Easy read, about 10 characters, and I had to find out how it ended! I almost didn't star reading book 2 in the 6 books series, but this time of year an easy read is what I needed! If you're an adult, go ahead and read this series if you want to enjoy reading with little thinking! If you have children who love mysteries and are in Grades 3-7, introduce them to an author for life! I also should add that it was refreshing to read a book without a single word of profanity in it! That just dawned me as I'm typing this! I will read this series about Theo Boone, 13 year old sleuth!
Meer lezen
13 mensen vonden dit nuttig
Vertaal recensie in het Nederlands

A. Tse
5,0 van 5 sterren I'm an adult and I love this book!
22 april 2016 - Gepubliceerd op Amazon.com
Geverifieerde aankoop
This is a terrific series for middle schoolers or elementary school kids with an advanced reading level. The content is pretty mature. Theodore Boone, the first book, is about a murder trial and the suspect is a slimy man suspected of killing his wife. But no more violent than most other books in this age group. There is lots of great information about how the court system works and just good common sense and moral decision-making. This main character is wonderful. A role model for how kids should behave today. I can't wait to read the rest of the series. They are all on my Amazon wish list.
Meer lezen
16 mensen vonden dit nuttig
Vertaal recensie in het Nederlands

Amazon Customer
5,0 van 5 sterren Fabulous especially if you are a fan of Encyclopedia Brown. Grisham, as always, did a fabulous job on a different kind of book.
16 mei 2017 - Gepubliceerd op Amazon.com
Geverifieerde aankoop
This title and the fact that it was John Grisham drew me to the book as I love his writing and I have such fond memories of two of my sons and how much they loved the mystery solving child Encyclopedia Brown. My middle son could always solve the mystery long before the end cam while my oldest son was frustrated that he took longer figuring it out. As always Grisham did not disappoint. It is a charming and well written book.
Meer lezen
4 mensen vonden dit nuttig
Vertaal recensie in het Nederlands

Greggorio!
3,0 van 5 sterren A PROMISING START!!!
6 juni 2013 - Gepubliceerd op Amazon.com
Indeling: Kindle-editieGeverifieerde aankoop
The premise behind this book really is quite clever. Two highly successful lawyers marry, have a child, and surprise, surprise - the offspring decides he wants to be a lawyer when he grows up! A nice, realistic portrayal of life in a legal household. The good thing about young Master Boone is that he is a very likeable character, both within the confines of the story, and beyond. Readers will like him because of his relative modesty, his insecurities, his faults and his talents. His fellow characters (school friends) like him because he is cool as.

His parents, too, are far from perfect, as is the highlight (for me) of the book - Uncle Ike. That dude has SERIOUS ISSUES but we love him just the same.

This book is FUN! Even though it is obviously aimed at the younger (teen?) reader, THEODORE BOON is a great introduction to the legal thriller as well as a way of making enquiring young minds think of life after the school years end. John Grisham's writing style has always been an easy one to pick up; he writes in the common, down to earth way that makes his books a joy to read. This concept is extrapolated for the younger market and it works a treat in this book.

Negatively speaking, I think the plot itself is the weak link in this story. Basing the complete book around a murder trial is normally a safe bet, but this case is a little feeble, and a boring one at that. There are, however, hints of suspense scattered throughout the story whenever Theo comes up against Omar Cheepe and I imagine he will have a role to play as we approach the end of the book.

I give this book three stars, but in actuality (your Honour) it is more like three and a half.