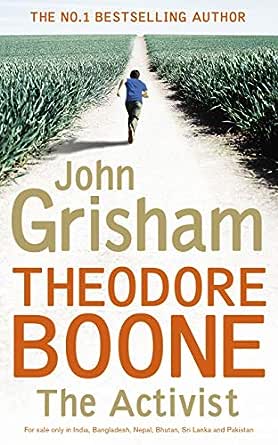 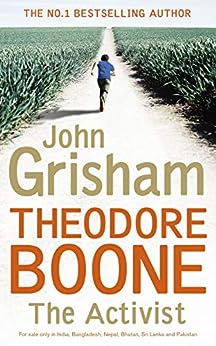 Raves for the Theodore Boone series

- "Smartly written." --"USA Today"
- "Edge-of-your-seat drama, sophisticated plotting, and plenty of spunk." --"Chicago Sun-Times"
- "Classic Grisham." --"The Los Angeles Times"
- "Not since Nancy Drew has a nosy, crime-obsessed kid been so hard to resist." --"The New York Times"
- "Gripping . . . I would recommend this book to anyone who loves a good mystery. I think everyone will be enthralled by "Theodore Boone"." --"Scholastic News"

Theodore Boone, young lawyer, has had a lot to deal with in his thirteen years, everything from kidnapping to murder. But he's come through it all and, with the law on his side, justice has always prevailed.

Sometimes, though, the law doesn't seem so just. His friend Hardie Quinn is about to have his family home bulldozed to make way for a bypass. Hardie is not the only one affected: other homes, businesses and schools lie in the path of the road. Theo has to tell his friend the bad news: for once, the law isn't on his side, and there's very little anyone can do to end the destruction.

Theo joins the campaign to stop the road. But when he stumbles on a terrible secret about the corrupt men behind the plan - a secret it is illegal for him to know - Theo must figure out how to keep the developers from breaking the law . . . without breaking it himself.

What readers are saying about THEODORE BOONE: THE ACTIVIST

'This is the best book in the series, a gripping read from the first page to the last' - 5 stars

C2017
3,0 van 5 sterren Kid Lawyer Makes a Difference!
30 juni 2018 - Gepubliceerd op Amazon.com
Geverifieerde aankoop
I like John Grisham's book, for the most part I like them a lot. This is the third Theodore Boone book I've read and I took away one star for the simple fact that an approximately thirteen year old boy would not use the vocabulary that Hardie uses. Theodore is the son of two lawyers, well-read, and a
kid lawyer" by hobby. He would be expected to excel in his language skills but what 13 y/o knows craftsman house or would describe the farm using the terms used in this book.

The basic story is relatively interesting but the violence (will not spoil) is excessive, especially regarding animals. If I had read this book as a teenager I would have been a sobby mess!

I will continue to read the rest of the book in the series.

Kindle Customer
5,0 van 5 sterren Theodore is cool kid!
2 februari 2015 - Gepubliceerd op Amazon.com
Geverifieerde aankoop
I chose the 5 stars cause John Grisham is one HECK of a writer and I have read alot of books he has written and there Isn't a bad one in the many books he has written that I know of any way.
I loved the first Theodore the kid lawyer is great so I had to read the series and I am glad I did. The characters in this book I felt I was in the neighborhood and community fighting the fight with them. Boy at one point I was so angry at grown men picking on kids because they thought there would be any consequences for their actions and they were fooled.
The adults were something else in this book. I stayed up alot of nights to find out what would happen next. I always lose sleep when I read John's book that why I start in a Friday night.
YOU WON'T be sorry. The young adults would love this series ( no foul language or violence) I actually think this is for young adults. They would like Theodore and Judge, his dog.

Amellia
5,0 van 5 sterren Middle School Attorney
9 juli 2019 - Gepubliceerd op Amazon.com
Geverifieerde aankoop
Even grandmothers are curious when it comes to a book who's main character is around the same age as one of her grandchildren. As an avid reader I wanted to check out this series by John Grisham to see if it was something my grandson would like. I was hooked from the moment I read the first book. I've now read them all and can't wait for my grandson to get back from Atlanta. Like me, he loves to read and is going to get lost in what all this 13 year old lawyer knows and does. 😊
Meer lezen
Een iemand vond dit nuttig
Vertaal recensie in het Nederlands

Arty B.
4,0 van 5 sterren Another great side of Grisham
26 september 2013 - Gepubliceerd op Amazon.com
Geverifieerde aankoop
I have read all of the books in this series, and most of the other Grisham books. I have seen several reviews that said this and the others in the series were unbelievable and kids don't talk and act like the kids in this book. Let me say, from not only having kids that were this age, to having been a middle school teacher, to having been involved in Scouting for many years, to having my children come to my office at times - I can say that kids are absolutely like the kids in the book. I will also say that I found myself slipping back to my own years of that age... and if nothing else, that is a good reason to read the book. All of the Grisham books don't have to be legal thrillers. It is just another avenue, but people do the same thing in his books.... they read to escape, to get a diversion, to see someone else's problems, etc. This book and the series will do that for you. In the end, How many can honestly say that at some point they haven't told one of those "back when I was in High School stories" or told their kids: " You don't know what it is really like to have to...." For that alone, read and enjoy and go back to your own childhood, and be reminded that it wasn't always as good as you remember now. Become a kid again for a bit, let things go and feel better.
Meer lezen
4 mensen vonden dit nuttig
Vertaal recensie in het Nederlands

bames
3,0 van 5 sterren Rather Slow Starter But Okay After That
17 juni 2013 - Gepubliceerd op Amazon.com
Geverifieerde aankoop
This book is the fourth book of the Theodore Boone Series. The series is all about Theo who is the only child of two lawyers. His father is an estate lawyer and his mother is a divorce lawyer. Theo loves the law and plans to be a famous trial lawyer some day. He loves the law so much that he has his own small "law office" within his parents' offices. He gives advice and helps out friends as much as he can.

In this fourth book of the series, Theo is faced with a problem that has something to do with budgets. He is very sad to learn that budget cuts are forcing his school to make certain changes. But, as there are cutbacks on one hand, the town council is considering voting on a project that will cost $200 million dollars. To make things much more worrisome, Theo's friend Hardie asks him whether the government can simply take the land that has been in his family for almost a century just to build something.

As he and his friends are spending some time fishing on the property that Hardie's family calls their own, his dog Judge gets brutally attacked by men who claim to be surveyors. They even shoved one of the boys and was rough with Theo himself. Judge is lucky to be alive and Theo's parents take the men to Animal Court for cruelty.

Theo has to explain about eminent domain and I have to admit that the explanation is clear and easy to understand especially for young children. The concept of acting on something that kids passionately care about is well presented.