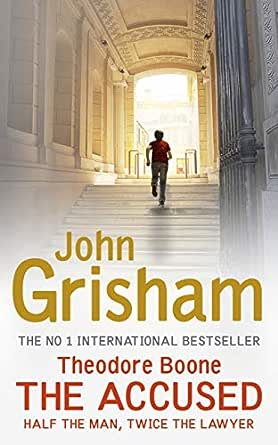 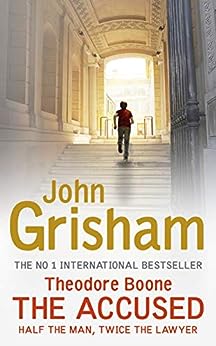 -"John Grisham is about as good a storyteller as we've got." --The New York Times Book Review

-"Another swift Grisham thrillerette." --The New York Times on The Abduction

-"Theo is a terrific character, an everyman kind of kid. . . . There are many positive messages wrapped in this entertaining story that appeals to the kid in all of us." --USA Today, on The Abduction Added praise for the Theodore Boone series

"Not since Nancy Drew has a nosy, crime-obsessed kid been so hard to resist." -The New York Times

"Gripping . . . I would recommend this book to anyone who loves a good mystery."--Scholastic News

Theodore Boone is the thirteen year old who knows more about the law than most adult lawyers. He certainly never expected to be the victim of crime himself. But then his bike is vandalised, he's attacked while doing his homework and, worst of all, framed for a robbery.

When stolen computer equipment turns up in Theo's school locker, the police start leaning on him hard. And he is the only suspect. What if he is found guilty? What about his dreams of becoming a lawyer? In a race against time, aided by his renegade uncle, Ike, Theo must find the real felon and reveal the true motivation behind the crimes of which he stands accused.

What readers are saying about THEODORE BOONE: THE ACCUSED

Author Don Massenzio
4,0 van 5 sterren A John Grisham YA series
26 januari 2015 - Gepubliceerd op Amazon.com
Geverifieerde aankoop
I had just finished reading a couple of John Grisham books, Sycamore Row and Gray Mountain, with mixed opinions of each. This book came up as a suggested one on my Kindle. After reading the first chapter I realized I had entered into Grisham's YA fiction. The Accused is not Grisham's first Theodore Boone, but this did not make it difficult to catch on. From the perspective of a YA work, it was an enjoyable read. Theodore is a 13 year old and the only child of two lawyers in a small town. He is an aspiring attorney that represents eccentric folk in the town's animal court where disputes are brought over pets and livestock and anyone can either represent themselves or another person.

This book involves Theodore's involvement in a crime that he did not commit but someone is attempting to frame him for it. It's an enjoyable story with colorful characters such as Theo's Uncle Ike, a disbarred lawyer, who helps him investigate the crime.

Overall, the book was enjoyable. Much like Harlan Coben's Mickey Bolitar YA series, this book has a main character that is wise beyond his years and maybe a little too perfect. Theo is bookish and aspires to be a lawyer, yet is popular in school. Perhaps having a more realistic reaction to his nature in the school setting might make this book and the series just a bit more believable. I'm going to go back and give the first Theodore Boone book a try.

Randal W. Howard
5,0 van 5 sterren To make matters worse, there is someone who is following Theo around ...
19 juli 2015 - Gepubliceerd op Amazon.com
Geverifieerde aankoop
Imagine being called to the Pricipal's Office on a Wednesday Morning... Imagime finding a DETECTIVE there, from the lacal cop shop. Imagine having the detective escort you to your locker, and having the principal open your locker, only to find 3 Linx 0-4 Tablets there. Products of the burglery of the Computer store the previous night. To make matters worse, there is someone who is followinf Theo around wirth a small knife, destroying his bike tires. You will NOT beleive who the culprits are, and you will not know until the end of the story.

The 4th book (not bought here but available) is called 'The Activist'. Story on a par with the first three. Theo, along with his friends, and a large part of the elementary school, manage to overcome a LARGE political force. What they do, and how they DO it is page-turning enjoyment!

Theodore Boone, his parents, his DOG (Judge) and his friends are unbeatable. Good people, ding the right thing. Put them all together,and WOW!!!! I can't wait for the following editions! I don't recall waiting for 'new ones' of anything like this since I was about10! Will they catch Pete Duffy? I hope so! (He runs away in the second book.) (he was out on bail, didn't show up for the new trial)

Jean Underfer-Babalis
5,0 van 5 sterren Fun and intruding read.
31 december 2017 - Gepubliceerd op Amazon.com
Geverifieerde aankoop
Intrigue, suspense, eclectic characters, and evokes emotions are the four characteristics of this novel. The ending is very surprising. I didn't start to figure out the guilty until the last 10% of the book. Then the intrigue became, how are they going to get them. The characters are endearing, funny, and a Hodge podge of personalities. I finished the book fast for me because I enjoyed it that much. This is the third book in this series and I'm just as interested in the series as I was when the first book came out.
Meer lezen
Vertaal recensie in het Nederlands

Robin T. Kohl
5,0 van 5 sterren I Love Theo!
26 mei 2012 - Gepubliceerd op Amazon.com
Geverifieerde aankoop
I was first introduced to Theodore Boone when I purchased "Theodore Boone: Kid Lawyer" by mistake. I am a 52 year-old woman and typically do not read children's books. I purchased the book because I read everything written by John Grisham and did not realize it was written for kids. I decided not return the book and read it instead. I was so glad of my order error and purposely ordered the next two books in the series. I immediately fell in love with Theo, his friends and his quirky family. I love Judge the dog and how important he is to Theo and vice versa.

The third installment in the series did not disappoint. We find Theo is in the unique position of having to defend himself as he is the accused. Many of the same characters from previous tales return, such as his uncle Ike. They feel familiar and it is nice to catch up with them. My favorite part of the book is when Theo defends Miss Petunia in Animal Court. It's fun that the "judge" asks Theo what the laws are. I was a tad disappointed that the mystery regarding a woman's murder has yet to be solved.

I love the way Theo respects adults but his thoughts revel his intelligence in how he wants to respond to adults, but out of respects holds his tongue. He is a very likable kid and it is nice that he doesn't have total disdain for all adults. He has several role models and has parents who love him and allow him to be a kid while training him to be a good person and responsible adult. I think this provides lessons for kids who read the books. His exploits are fun for me and I know kids would enjoy them as well.

I highly recommend this book for kids and adults as well. If I had children, I think if would be nice to read them together and have discussions about lessons learned from Theo's adventures.

Richard March
5,0 van 5 sterren What Summer reading Is All About ...
29 augustus 2018 - Gepubliceerd op Amazon.com
Geverifieerde aankoop
These books, there are six so far .. are for people way younger than I am .. that said .. who doesn't like a 13 year old lawyer who can solve anything .. who is kind and decent and fun ... perfect books for pre-teens and teenagers ... The books are just fun to read .. a nice diversion to most of what I read .. to encourage reading these books would be a perfect birthday or Christmas present ...
Meer lezen
Vertaal recensie in het Nederlands
Ga naar Amazon.com om alle 947 recensies te bekijken 4,3 van 5 sterren
Terug naar boven
Over ons
Verkoop bij ons
We helpen je graag
© 1996-2020, Amazon.com, Inc. en dochterondernemingen