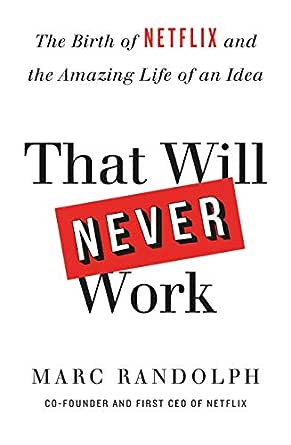 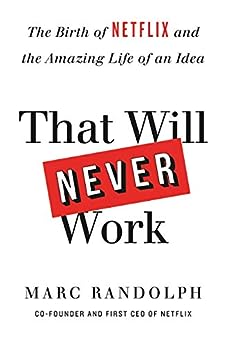 That Will Never Work: The Birth of Netflix and the Amazing Life of an Idea (English Edition) Kindle-editie

In the tradition of Phil Knight's Shoe Dog comes the incredible untold story of how Netflix went from concept to company - all revealed by co-founder and first CEO Marc Randolph.

"Netflix was built on the vision and creative DNA of one man-Marc Randolph. As the founding CEO, his leadership defined the culture of Netflix and laid the groundwork for successive, global revolutions in how we make and consume entertainment." --Gina Keating, author of Netflixed: The Epic Battle for America's Eyeballs

"Marc is an unusually brave soul. Marc's genius in recognizing that not knowing frees you to experiment and observe and to ultimately win." --Lloyd Tabb, founder of Looker

"Charming, fascinating and very funny. If you've ever wondered how to turn an idea into a global household name - or what happens when you try - Marc Randolph will demystify the world of Silicon Valley start-ups, and make you laugh a lot along the way." --Decca Aitkenhead, The Sunday Times

"A charming first-person account of the early days of one of the most successful tech start-ups ever. An engaging read that will engross any would-be entrepreneur." --The Washington Post

Once upon a time, brick-and-mortar video stores were king. Late fees were ubiquitous, video-streaming unheard of, and widespread DVD adoption seemed about as imminent as flying cars. These were the widely accepted laws of the land in 1997 when Marc Randolph had an idea.

It was a simple thought - leveraging the internet to rent movies - and was just one of many more proposals, like personalised baseball bats and a shampoo delivery service, that Randolph would pitch to his business partner, Reed Hastings, on their commute to work each morning.

But Hastings was intrigued, and the pair - with Hastings as the primary investor and Randolph as the CEO - founded a company.

Now with over 150 million subscribers, Netflix's triumph feels inevitable but the twenty-first century's most disruptive start-up began with few believers and calamity at every turn. From having to pitch his own mother on being an early investor, to the motel conference room that served as a first office, to server crashes on launch day, to the now-infamous meeting when they pitched Blockbuster to acquire them, Marc Randolph's transformational journey exemplifies how anyone with grit, gut instincts and determination can change the world - even with an idea that many think will never work.

What emerges, however, isn't just the inside story of one of the world's most iconic companies. Full of counter-intuitive concepts and written in binge-worthy prose, it answers some of our most fundamental questions about taking that leap of faith in business or in life: How do you begin? How do you weather disappointment and failure? How do you deal with success? What even is success?

From idea generation to team building to knowing when it's time to let go, That Will Never Work is not only the ultimate follow-your-dreams parable but also one of the most dramatic and insightful entrepreneurial stories of our time.

"Marc wastes no time cutting through the noise and identifying the truth. Every moment I have spent with Marc, whether it was as he formulated and launched Netflix or since then, has been truly rewarding. Marc understands what is important whether it is your product, your marketing, or your business plan. A remarkable and one of a kind visionary." --Mitch Lowe, founder of RedBox and CEO of MoviePass

"An entertaining chronicle of creativity, luck, and unflagging perseverance." --Kirkus

Dave Millman
5,0 van 5 sterren Go along for the ride! Super readable startup story
17 september 2019 - Gepubliceerd op Amazon.com
Geverifieerde aankoop
The book arrived via preorder about 6 hours ago. I picked it up to skim during coffee and was immediately sucked in. The author's casual, "You are there," first-person narrative is super readable and fun besides.

This is a classic Silicon Valley startup story, told by a player who helped make Netflix happen. The author portrays himself humbly and sometimes comically (personalized shampoo by mail), but in later chapters it becomes clear that he's quite experienced as both an entrepreneur and a leader at a larger company. It's a personal memoir that takes you inside the experiences, thoughts and emotions of starting a company that grows big. I tensed up when the layoffs came, and laughed at the lighter moments.

Unlike so many business books, this one does not aspire to be a Harvard Business School case study. The author does not pretend that the lessons learned at Netflix apply universally to all startups. But he does explain the detailed thinking behind big decisions, which is valuable and rare.

LR
5,0 van 5 sterren Heartfelt, Inspirational, and Entertaining
19 september 2019 - Gepubliceerd op Amazon.com
Geverifieerde aankoop
I enjoyed this book thoroughly. The book follows a format that works: it's a zero to one story that ties in business lessons and life lessons (similar to Ray Dalio's 'Principals', or Phil Knight's 'Shoe Dog'). The story itself is fascinating - it captures the grind, the fun, and the adventure of building something. In the final portion of the book Randolph really opens up - he speaks to why he started something, and why he left his baby. Ultimately he left this reader thinking... what are all the things I want to do that people have said "that will never work?" And which of them should I take steps towards trying.

Would recommend to anyone with an idea (business or otherwise). Resonated especially strongly with me as a young person, early in my career, trying to find my passion and determine how much risk is appropriate at this point in my life.
Meer lezen
15 mensen vonden dit nuttig
Vertaal recensie in het Nederlands

Ken Sterling
5,0 van 5 sterren This book will work!
20 september 2019 - Gepubliceerd op Amazon.com
Geverifieerde aankoop
One of the best business (or any) books I've read. Randolph's writing style and "voice" are funny, clever and this book is a fast read. Want to learn how Netflix started, all the crazy ideas they had (before Netflix) and get an inside view of what it took to build this tech and media giant - get the book. The flow of the story, the authentic and often times, humble admissions by the writer gave me the feeling that I was there, that it was real and it took a lot of hard work to pull this off. Highly recommend this book for entrepreneurs, students and I even bought one for my kid.
Meer lezen
9 mensen vonden dit nuttig
Vertaal recensie in het Nederlands

I tore through this book- I could not put it down. As a long-time NFLX investor, I've always been fascinated by this ever-evolving company, it's unique culture and strong leadership.

I was always a Reed Hastings fan- now I am a Marc Randolph fan!

His candid, fast-paced, and genuine telling of the early days of NFLX is compelling. Although it is full of business lessons, it is never preachy or arrogant like most books of this type.

Marc Randolph, with humility and grace, tells us the quirks, stumbles, and victories along the way of the early days at NFLX. What a gift this book is to us readers- it is a little bit of magic to be transported, and along with him and his small team in the early days.

This book is a must read for investors, business people, and anyone trying to do something hard that is unconventional.
Meer lezen
5 mensen vonden dit nuttig
Vertaal recensie in het Nederlands

Barrett Cordero
5,0 van 5 sterren Inspiring and insightful
18 september 2019 - Gepubliceerd op Amazon.com
Geverifieerde aankoop
Being in our business, I read A LOT. Probably a book every two weeks. I'm grateful that is even a factor in our work. I recently read “That Will Never Work: The Birth of Netflix and the Amazing Life of an Idea.” I have to say I didn’t expect to laugh, learn and be inspired as much as I was. Its a page turner! Not dense or boring. Highly recommend ordering the book.
Meer lezen
8 mensen vonden dit nuttig
Vertaal recensie in het Nederlands
Ga naar Amazon.com om alle 108 recensies te bekijken 4,9 van 5 sterren
Terug naar boven
Over ons
Verkoop bij ons
We helpen je graag
© 1996-2020, Amazon.com, Inc. en dochterondernemingen