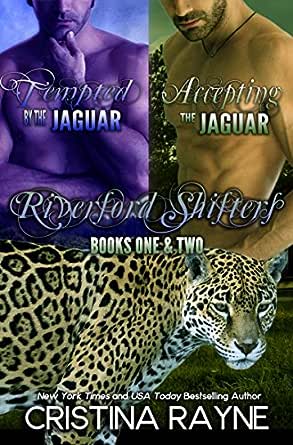 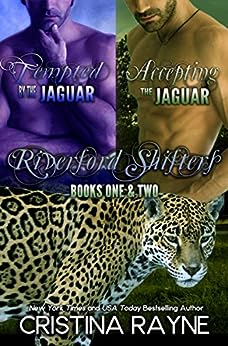 Book One: Tempted by the Jaguar

Kylie Moore has a secret, one she and her adoptive father have carefully guarded for over a decade since the night her parents disappeared. However, when she is randomly attacked one night in her apartment complex's parking lot, that one violent act sets in motion events that reveal not only her long-dormant shifter heritage in the worst possible way, but could also railroad her efforts of finding out what really happened to her parents.

Suddenly finding herself the center of attention among Riverford's shifter clans, Kylie's only hope of navigating such a dangerous minefield of politics and perpetual battles over territory is Hunter, a too-sexy-for-her-peace-of-mind jaguar shifter that might be her key to gaining insider access to the hidden and secretive shifter society.

Now Kylie must decide whether to integrate more deeply into Hunter's jaguar clan in order to take advantage of this rare opportunity or to run while her secret still remains uncovered. To stay would mean deliberately putting herself in more danger than Kylie may be prepared to handle, especially when Hunter, the person she must rely on, may be hiding something as well.

Kylie knew from the beginning that getting romantically involved with Hunter was an extremely bad idea, and now because of the Pandora’s Box she inadvertently blew wide open in order to protect him, more than just Hunter may now determine the consequences she and those she loves will ultimately end up paying.

Cara
4,0 van 5 sterren I liked this boxed set.
25 mei 2015 - Gepubliceerd op Amazon.com
Geverifieerde aankoop
I liked this boxed set however in the last book it left to many unanswered questions which I hope the author will continue in this series. What did Gaither want to talk to Kylie about? Does Kylie ever get a chance to talk to Karen to see if she really did betray her? Do they find anything in Molly's bloodwork? What were the lions trying to accomplish in that under ground lab? What happen to Kylies mom? Does Anna survive the surgery? Was it a gator shifter that kidnapped Molly or was it a polyester? I really did like this series so far and really really hope the author addresses these question in the future otherwise she will have left a big cliff hanger.
Meer lezen
3 mensen vonden dit nuttig
Vertaal recensie in het Nederlands

Tanya P.
5,0 van 5 sterren Totally AWESOME
28 oktober 2017 - Gepubliceerd op Amazon.com
Geverifieerde aankoop
Really makes you think about what some people have to go through when others jump to conclusions without all the information, or without bothering to ask questions to be sure that what they've heard is even true. I don't believe that polyshifters are in anyway working with the lions willingly​.
Meer lezen
2 mensen vonden dit nuttig
Vertaal recensie in het Nederlands

Kindle Customer
3,0 van 5 sterren Interesting
7 april 2017 - Gepubliceerd op Amazon.com
Geverifieerde aankoop
Good choice to include both books because the first one leaves you in the lurch. The second one also leaves a lot of unanswered questions but it does end.
Meer lezen
Een iemand vond dit nuttig
Vertaal recensie in het Nederlands