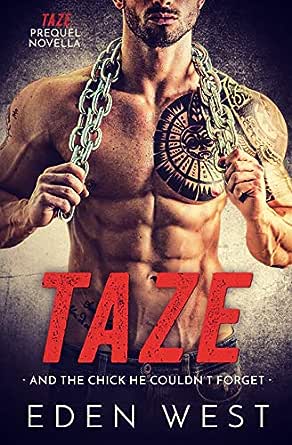 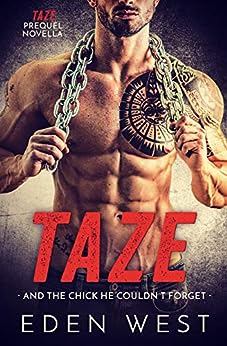 They call him Taze. Why? Because he can stop a girl in her tracks with just a look.

That’s right, a biker so drop-dead sexy, his glance is more dangerous than a taser.

But even though Taze could have any girl he wants, he’s never found one that keeps his interest for more than a night.

That is, until he meets Micah.

Micah is a girl-next-door waitress who doesn’t look twice at Taze and his gang when they first pass through her Texas diner. After all, she wouldn’t think about ever dating some vagrant biker.

But Taze can’t get this special lady out of his head.

So he returns to officially meet her.

Then again to impress her.

The again to sweep her off her feet and take her on the ride of her life.

When Micah and Taze are finished, they both know they’ll never be returning to their old way of life again.

This steamy romance novella is a standalone prequel to the full-length novel Taze: The Bad Boy Biker Next Door.

Will Decker
3,0 van 5 sterren This story needs a dose of reality injected into it
11 februari 2019 - Gepubliceerd op Amazon.com
Geverifieerde aankoop
This story is really lacking in character development. There's a nice romantic read here from the heroes POV, a bad-a.. biker. But without the character development it falls short. It's also a little disappointing that the hero can kick some slob's butt, but not an equal's. It also got old that the author kept referring to their bikes as choppers all the time. I seriously doubt that the entire group on this mission were on choppers. And I'm thinking of how big a bulge a kilo of drugs and a handgun must make in the guy's jacket. Or how the cops simply gave up chasing them. Too many of these little discrepancies for my tastes.
Meer lezen
Een iemand vond dit nuttig
Vertaal recensie in het Nederlands

The story is told from the heroes POV, but several times he seems depressed, or perhaps just very insecure. Several other times he seems to take the lead among his small squad of bikers on a drug smuggling mission, yet another character is the leader.

Then we have Micah, the “chick” he can’t forget. When we first meet her she seems sad and very demure; easily embarrassed. Then suddenly she is winking and full of sexual innuendo.

The story itself has great potential, and interested me enough to keep reading, but I think it would have done well if it were a bit longer. I think this would have allowed for more development. I really wanted to like these two characters, and several times I did. I’m definitely interested enough to read the next book in the series.

Robin R. Cripps
4,0 van 5 sterren It was a very fast read
28 december 2019 - Gepubliceerd op Amazon.com
Geverifieerde aankoop
I like the story but it was definitely too short. Love Taze and Micah. Cute biker story. I could see the images and want more to see. Thank you for letting me read it.
Meer lezen
Vertaal recensie in het Nederlands

Kindle Customer
4,0 van 5 sterren Samantha's 📚
27 februari 2019 - Gepubliceerd op Amazon.com
Geverifieerde aankoop
My new kindle is wonderful and so was the first book read on it.it was ☺ and 😢 and all the 🔥 in between.
Meer lezen
Vertaal recensie in het Nederlands

ShirleyAvidReader
3,0 van 5 sterren Disillunsioned
28 januari 2019 - Gepubliceerd op Amazon.com
It's my own fault, I'd had high hopes this would be an exciting read. It wasn't all that. I have to thank the author though, this was a learning experience for me, too.

Don't get me wrong, there is a good story here, it was just poorly presented. The characters are so thinly developed they're transparent. I am a strong proponent for third person story telling, but that's no guarantee it'll be well told. Here. it wasn't.
There was very little if any description of characters and scenery. I understand this is a novella so it's supposed to be quick and short. That there is why word usage is so important, you choose your words carefully. World building should not be taken for granted just because it's a popular and oft written genre. The author has the responsibility to their readers and themselves to distinguish their stories from all the other authors out there.

I got my first clue in the opening scenes when the window shutters were described as shudders. I realize this is more of an editing issue but if the writer doesn't know enough to use the right word in the first place what hope is there. Story telling develops a story telling voice, which can make or break the speaker. By the time I reached the forth chapter I envisioned a middle age valley girl.