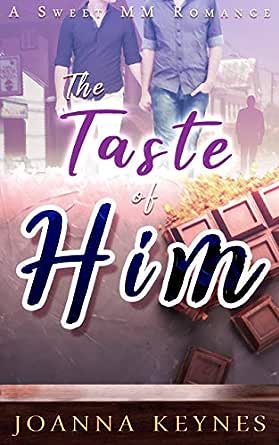 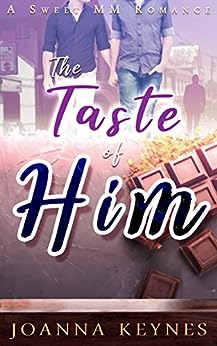 The Taste of Him: A Sweet MM Romance (English Edition) Kindle-editie

"I couldn't stand having a taste of you and never seeing you again.”

As a penniless drifter, Alex Walker never saw himself settling down or having a steady job. But after narrowly escaping with his life in a crash just outside the small Kentucky town of Berwood, he is left with no choice but to abandon the road and hustle for cash.

There's just one problem: Nobody's offering work for drifters. Not, that is, except for a small, run-down artisanal Chocolatier, whose owner isn't so much an artisan as he is an antisocial asshole—At least, that's what people tell him to expect.

But the green-eyed, messy-haired owner of the business turns out to be an alluring mystery, who soon has James forgetting his urgency to get back on the road.

Finding himself growing addicted to his employer's odd manner and sharp, acerbic tongue, James seeks to unravel more of Tom's troubled history and help save his struggling business. In the process, he begins to wonder if his old life is really something he is so keen on returning to.

He wants to stay with Tom. But can he afford to take that risk? Or will his past finally catch up and put them both in danger?

“Stay another night? Not on the sofa, this time.”

Tom Hughes thought everything would change when his ex-business partner died. It didn't. In fact, nothing changed at all, which was the worst thing that could have possibly happened. Stuck in a rut and too stubborn to accept help, he let their once-flourishing business—and himself—fall into disrepair.

Until he met James.

Fair-haired, blue-eyed, and obviously too good-looking to be halfway smart, there was no reason to think James would have any interest in a broken thing like him. But if there was one thing Tom knew for a cold, hard fact, it was that appearances can be deceiving.

James showed him that it doesn't matter whether you succeeded or fail, the important thing was to not give up. But Tom wasn't the only one with a stormy history... and when a ghost from James' past threatens to tear them apart, he will need to find it within himself to keep fighting—even against impossible odds.

The Taste of Him is a 60k MM Romance with some strong language and contains adult scenes suitable for a mature audience only.
click to open popover

avidreader4ever
4,0 van 5 sterren so much more
19 december 2019 - Gepubliceerd op Amazon.com
Geverifieerde aankoop
When I saw the title I thought, this should be good and it was. But it was so much going on in this story. These main characters have so much going on under the surface that it felt like this story was about evolution so much bigger than just a romantic love story and watching both main characters transform was so satisfying.

Tappy
5,0 van 5 sterren Deserves five stars and more
16 december 2019 - Gepubliceerd op Amazon.com
This book was so intense it had my heart pounding in my chest. Alex and Tom had their own baggage to deal with. Tom’s was the past and the awful effects it had on him while Alex had his past demons but also some that were very much alive. Beginning the story I thought ,”Oh, a sweet romance”, but was I ever wrong. Yes, a sweet romance for sure but, though there were hints to a deeper story, I was amazed by the twist the book took. Intense doesn’t seem strong enough and brilliant seems too mild. This story had me in it’s grips until the very end. Absolutely deserves five stars and more.

Dmauritzen
4,0 van 5 sterren Great Read
18 december 2019 - Gepubliceerd op Amazon.com
Cute. Loved the storyline. The characters are so much fun. James is running from life until the day he walks into the struggling business and meets the messy chocolate maker who everyone says a a grumpy jerk. Turns out he just needed a little help and a lot of love. Amazing Read loved it. Cute sweet, and fun.
Meer lezen
Vertaal recensie in het Nederlands

Cynthia Brooks
5,0 van 5 sterren Romance Suspense
4 januari 2020 - Gepubliceerd op Amazon.com
Alex and Tom are both running from something and both have secrets. Neither wants a relationship, neither want to open up to the other. I really enjoyed this book.
Meer lezen
Vertaal recensie in het Nederlands