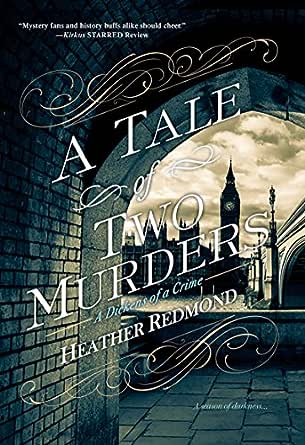 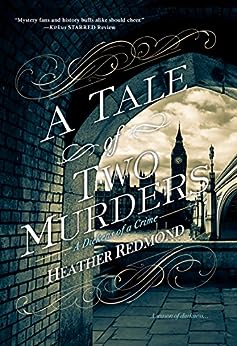 On the eve of the Victorian era, London has a new sleuth . . .

In the winter of 1835, young Charles Dickens is a journalist on the rise at the Evening Chronicle. Invited to dinner at the estate of the newspaper's co-editor, Charles is smitten with his boss's daughter, vivacious nineteen-year-old Kate Hogarth. They are having the best of times when a scream shatters the pleasant evening. Charles, Kate, and her father rush to the neighbors' home, where Miss Christiana Lugoson lies unconscious on the floor. By morning, the poor young woman will be dead.

When Charles hears from a colleague of a very similar mysterious death a year ago to the date, also a young woman, he begins to suspect poisoning and feels compelled to investigate. The lovely Kate offers to help—using her social position to gain access to the members of the upper crust, now suspects in a murder. If Charles can find justice for the victims, it will be a far, far better thing than he has ever done. But with a twist or two in this most peculiar case, he and Kate may be in for the worst of times . . .
click to open popover

Mal Warwick
4,0 van 5 sterren Would you believe Charles Dickens as a homicide detective? I would!
27 september 2018 - Gepubliceerd op Amazon.com
Geverifieerde aankoop
Charles Dickens is England's best-known author after William Shakespeare. In fact, during the peak of his career in the mid-19th century, he was more famous (and far richer) than Shakespeare had ever become in his lifetime.

In some ways, Dickens was just as colorful as the characters in his novels. When he was 12, his father was sent to debtors' prison. The boy was forced to leave school. He went to work in a factory pasting labels on pots of boot blacking. Even when his father was released from prison, his mother forced him to keep working there. He later spent only two more years in school. Dickens complained about "the haphazard, desultory teaching, poor discipline punctuated by the headmaster's sadistic brutality, the seedy ushers and general run-down atmosphere." Anyone who's read the man's novels will recognize the scene.

By the time he was 21, he had begun to write stories for the popular press based in part on his own life experiences. Given his commitment to social reform, his ability to mix with people of all social classes, and his acute powers of observation, it's not too much of a stretch to think that young Dickens might have become involved in a murder investigation. After all, violence was ever-present in Victorian London. In any case, that's the conceit of Heather Raymond's charming novel A Tale of Two Murders.

Charles Dickens is 22. He's employed as a reporter for the Evening Chronicle and writes "sketches" for other papers to earn money on the side. He lives in a modest apartment with his 14-year-old brother, Fred. One evening, as Dickens is enjoying a home-cooked dinner with his boss, George Hogarth, the editor's 19-year-old daughter, Kate, catches his eye. Dickens is smitten. And when they hear a scream coming from a neighboring house, Charles is thrilled to accompany Kate to investigate. In the neighbors' home, they discover a woman of about Kate's age lying, deathly ill. They spend the night helping her mother nurse the young woman. As morning approaches, however, she dies.

A mystery starring Charles Dickens
Clearly, the woman was a victim of poisoning. But who would kill her, and why? The mystery draws Charles and Kate into a complex and perilous investigation that exposes the young journalist to the extremes of London society. He finds himself moving back and from the drawing rooms of the aristocracy to the fetid streets of the city. Naturally, since this is fiction, we know that Charles and Kate will solve the murder and all will come out well in the end. But it's a lot of fun to watch the budding author in action along the way. And the colorful picture of London society in the mid-19th century is rewarding as well.

About the author
Heather Redmond is a long-time author under another name. First published in mystery, she took a long detour through romance before returning. Though her last known British ancestor departed London in the 1920s, she is a committed anglophile, Dickens devotee, and lover of all things nineteenth century.
Meer lezen
3 mensen vonden dit nuttig
Vertaal recensie in het Nederlands

Kindle Customer
4,0 van 5 sterren very quick to read
3 september 2018 - Gepubliceerd op Amazon.com
Geverifieerde aankoop
I read this book as a historical mystery - I enjoyed it some, but I have often read books where the mystery was better plotted and the time setting more accurate. I recommend this book in general - I was a little disappointed - I thought it could have set the time frame a bit better.
Meer lezen
3 mensen vonden dit nuttig
Vertaal recensie in het Nederlands

Linda Romer
4,0 van 5 sterren An enjoyable read
6 juni 2019 - Gepubliceerd op Amazon.com
Geverifieerde aankoop
I enjoyed reading A Tale of Two Murders. I just love Historical Fiction and Mysteries. I loved the setting in London during the Victorian era. The young Charles Dickens was very persistent when trying to figure out who committed the two murders. he was aided by Kate Hogarth his boss's daughter whom he is totally smitten with. I'm looking forward to reading the next book in A Dickens of a Crime Series.

I give A Tale of Two Murders 4 stars for its interesting read.
I would recommend this book to Historical/Mystery Fans.
Meer lezen
Vertaal recensie in het Nederlands

Ann Richardson
4,0 van 5 sterren Dickens as a Character
7 oktober 2018 - Gepubliceerd op Amazon.com
Geverifieerde aankoop
The mystery has its twists and surprises. The Dickens character is a reasonable attempt to capture the author as a young man, to share the challenges he faced in society, and to illustrate the tenacity that finally won him his place in history--and success and acclaim in his time. The mystery keeps a reader guessing until the end although every clue is shared along the way.
Meer lezen
Vertaal recensie in het Nederlands