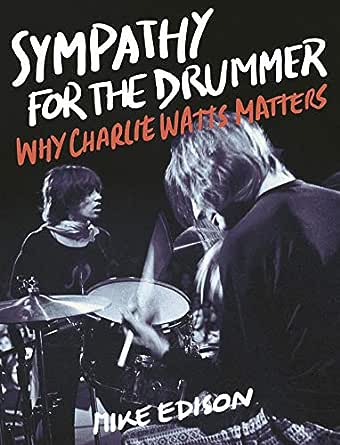 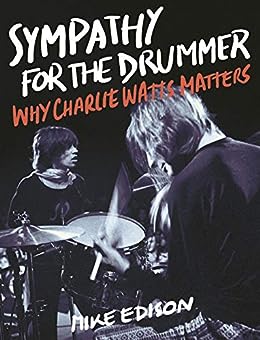 "Proof positive that one can be both edgy and erudite, lowbrow and literate, and take joy in the unbridled pleasures of the id without sacrificing the higher mind." --PopMatters

"Charlie Watts lays it down, and the others follow. He is the Law. This book explains why." -- Clem Burke, Blondie

"The most colorfully graphic and, arguably, the most accurate description extant of the Rolling Stones at the absolute pinnacle of their career."-- All About Jazz

"[Edison] shoots from the hip from the first line to the last in this extremely entertaining celebration... Edison's frenzied, gunned up prose repeatedly reminds one and all of exactly why Charlie Watts Matters... Stones fans and jazzers, bluesers and rockers alike all owe Mike Edison a massive thank you." ★★★★ -- Shindig

"Sympathy thankfully is not a ponderous academic treatise, and while Edison occasionally leans into gonzo flights of fancy, he takes the reader on a grand tour of forty years of Watts' contributions to the Rolling Stones... As Keith Richards has said, "No Charlie, no Stones," and Edison wrote the book to prove it."-- Modern Drummer

"Sympathy for the Drummer is so much more than an incisive appreciation of Charlie Watts, it is an effusively infectious tribute to art in all of its myriad forms. Edison's insights into the Rolling Stones are backed up by a fluent scope of cultural historicity, and peppered with an array of no-nonsense broadsides. Compelling evidence to convince even the most non-partisan reader that Charlie is indeed the WORLD'S GREATEST ROCK'N'ROLL DRUMMER!" -- Jim Sclavunos, Nick Cave and the Bad Seeds

"It's not hard to fathom why a former editor of both Screw and High Times magazines would find writing about the Rolling Stones, one of the most dissolute champions of sex and drugs, right in his conceptual wheelhouse. But Edison takes a unique approach by focusing his investigation on Charlie Watts, the woefully underappreciated lynchpin of the Stones sound. This book is a delightful look at the Stones through the eyes and the beats of their most reticent member. Finally someone gave this drummer some." -- Larry "Ratso" Sloman, author On the Road with Bob Dylan

"A great voice of authority and knowledge, dispensed with free-wheeling fluidity. Super entertaining, and right on." -- Katherine Turman, coauthor, Louder Than Hell: The Complete Oral History of Heavy Metal

Sympathy for the Drummer: Why Charlie Watts Matters is both a gonzo rush—capturing the bristling energy of the Rolling Stones and the times in which they lived—and a wide-eyed reflection on why the Greatest Rock 'n' Roll Band in the World needed the world's greatest rock 'n' roll drummer.

Across five decades, Rolling Stones drummer Charlie Watts has had the best seat in the house. Charlie Watts, the anti-rock star—an urbane jazz fan with a dry wit and little taste for the limelight—was witness to the most savage years in rock history, and emerged a hero, a warrior poet. With his easy swing and often loping, uneven fills, he found nuance in a music that often had little room for it, and along with his greatest ally, Keith Richards, he gave the Stones their swaggering beat. While others battled their drums, Charlie played his modest kit with finesse and humility, and yet his relentless grooves on the nastiest hard-rock numbers of the era ("Gimme Shelter," "Street Fighting Man," "Brown Sugar," "Jumpin' Jack Flash," etc.) delivered a dangerous authenticity to a band that on their best nights should have been put in jail.

Author Mike Edison, himself a notorious raconteur and accomplished drummer, tells a tale of respect and satisfaction that goes far beyond drums, drumming, and the Rolling Stones, ripping apart the history of rock'n'roll, and celebrating sixty years of cultural upheaval. He tears the sheets off of the myths of music making, shredding the phonies and the frauds, and unifies the frayed edges of disco, punk, blues, country, soul, jazz, and R&B—the soundtrack of our lives.

Highly opinionated, fearless, and often hilarious, Sympathy is as an unexpected treat for music fans and pop culture mavens, as edgy and ribald as the Rolling Stones at their finest, never losing sight of the sex and magic that puts the roll in the rock —the beat, that crazy beat!—and the man who drove the band, their true engine, the utterly irreplaceable Charlie Watts.

Tyrone "Dollar" Green
5,0 van 5 sterren The Greatest Rock Drummer Who Ever Rolled
15 november 2019 - Gepubliceerd op Amazon.com
Geverifieerde aankoop
In a maximalist style Mike Edison praises the minimalism of rock’s greatest roller. In SYMPATHY FOR THE DRUMMER: WHY CHARLIE WATTS MATTERS, he’s our Virgil describing the empire of the Rolling Stones, who arrogantly called themselves the world’s greatest rock and roll band, which is hard to argue with. Edison doesn’t argue, he enthuses, preaches from his paper pulpit and excitedly praises Watts to the point of threatening an aneurysm. He makes his point by placing Watt’s drums in the context of the greats, from blues to jazz, who knew that rock is only as strong as it’s ability to roll. Watts kept things deceptively simple – but try and replicate it – and his basic drum kit cooks with more heat than lesser drummers who hide behind the battlements of bloated kits, which do more to separate the drummer from the material than power it. Edison knows his stuff. He loves Watts, the Rolling Stones, blues and jazz, and his passion beats the heart of this love poem to what is becoming a lost art. But those are always the best kinds. Full disclosure, Mike Edison has been my friend for over 30 years, but regardless of our history (he coined the term that best describes my drum sound: the Kaiser roll, all soft and doughy), buy this book. Get it for your friends, stuff your xmas stockings with it, give to strangers, drop it in the tip bucket and at the feet of begging street people. Everyone needs to understand why Charlie Watts matters.
Meer lezen
6 mensen vonden dit nuttig
Vertaal recensie in het Nederlands

M. Mallin
5,0 van 5 sterren This book MATTERS
2 december 2019 - Gepubliceerd op Amazon.com
Geverifieerde aankoop
Like Charlie Watts, the great drummer of the Rolling Stones who is the subject of this tome, this book MATTERS. To be sure, there are many books on the Rolling Stones. This one, however, approaches the topic from a very specific, unique, and under-appreciated perspective - the role of Charlie Watts not only in providing the back beat for the Stones, but in helping to define the band;s overall sound, feel, and power. Watts is easily overlooked - to the layman he can sound simplistic. So if this book helps enthusiasts and laymen alike to understand just how critical Watts is to the entire Stones enterprise, it has served a valuable purpose. And the book does exactly that, in clear, accessible, and highly entertaining and readable prose courtesy of Mike Edison.

There's not enough I can say about Mike Edison's writing in this book. Virtually every sentence jumps off the page and is worth savoring - and that is praise that I would not use lightly. Edison is thorough in his discussion and never fails to entertain and inform - and he clearly had a great time writing this book, and that comes through on every page. He knows his stuff - but he wants you to appreciate the subject matter too and that comes across clearly in his highly engaging style.

Simply put, the book cannot be more highly recommended. It is written by an individual knowledgeable about what he writes, with clear passion and appreciation for his topic. Given how much I love Charlie Watts, I am thrilled that Edison wrote this book; but I also believe that anyone with an interest in popular music, in the amazing band at the heart of the book which has somehow survived for over 50 years now, or in how drums can play a critical and defining role in how a band presents itself, will find this a great read. Or maybe like me you just love Charlie Watts! That's good enough too. A great book.
Meer lezen
4 mensen vonden dit nuttig
Vertaal recensie in het Nederlands

Ted Rosen
5,0 van 5 sterren It's about Rock n' Roll, and I Like It
12 november 2019 - Gepubliceerd op Amazon.com
Geverifieerde aankoop
I just finished Mike Edison's latest book "Sympathy for the Drummer". It's a brilliant ode to the Rolling Stones and their strangely well-behaved drummer, Charlie Watts. Edison loves the Stones. His ardor is not restrained here.

As a drummer himself, Edison has plenty of insight into the subtlety of Charlie Watts' playing. I gotta be honest: I'm one of those non-drummers who always thought Charlie Watts was a just a strange man in the long shadow of Jagger/Richards. My beliefs have been challenged and corrected. Charlie does things no other drummer in his situation could do. He's an ardent, self-taught jazz drummer who was shoehorned into a crazy, loud, violent rock n' roll outfit at a tender young age. And he took to it with abandon, grace, and precision.

And besides: Charlie was a real mensch. By all accounts he has remained faithful to his wife Shirley since 1964. This despite being a flagship member of the band Edison likes to capitalize as THE GREATEST ROCK N' ROLL BAND IN THE WORLD. While Mick and Keith were ingesting mountains of drugs and sleeping with legions of groupies, Charlie was in his hotel room, sketching the furniture and relaxing. It may not be rock n' roll, but I like it.

If you're like me, you probably like the Rolling Stones but were never captivated by them. I saw them live in 1994 during their Voodoo Lounge tour and was unimpressed. Maybe they had a bad night. I dunno. But I thought they were a sloppy mess. A bunch of old guys doing a victory lap without the benefit of having put in a bit of practice first. My opinion of them plummeted.

This book brought me back into the fold. But It doesn't even matter if you love the Rolling Stones. If you love rock n' roll, READ THIS BOOK.
Meer lezen
5 mensen vonden dit nuttig
Vertaal recensie in het Nederlands

D. Sean Brickell
5,0 van 5 sterren THE GIBRALTAR OF ROCK. . .
14 december 2019 - Gepubliceerd op Amazon.com
Geverifieerde aankoop
Charlie Watts has been my favorite drummer since the mid-60s. when "Get Off My Cloud" completely rewired my perception to what percussion in rock 'n' roll could be. Watts's powerful pounding simultaneously ignited and drove the band whilst anchoring the twin independent personalities of Jagger and Richards who threatened to spin off orbit. And you know something? This remarkable ability and sensitivity is the spine of the band both on record and live. I worked with Atlantic Records in the late 70s/early 80s and had the good fortune to see the band live numerous times. Many was the night Watts's foot into the bass drum would kick the ass of a slightly slow Mick or Keith into gear: c'mon you slackers and give the crowd our best show. Other nights the boys would get all excited with themselves and try to run ahead. Watts confidently and conservatively wouldn't allow a runaway train.