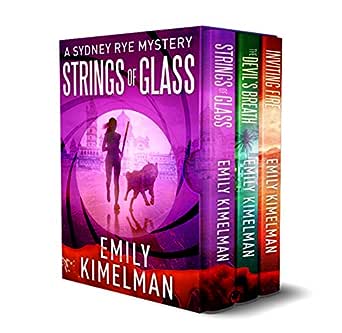 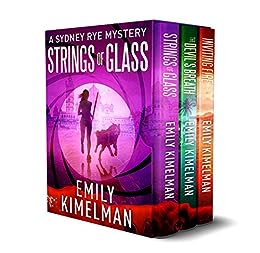 Justice with a vengeance.

Do you love powerful characters, gritty mysteries and heroic dogs?

Because that’s what you get with the Sydney Rye Mysteries.
Continue this searing adventure as Sydney Rye and her dog, Blue, battle for justice around the globe in books 4-6. From the temples of India, to the jungles of Costa Rica, Sydney Rye inspires and fights alongside the Joyful Justice vigilante network. Experience the powerful emotions, thrilling twists, and atmospheric locations that suck you into this best-selling series.

Trouble finds Rye when she stops the attempted rape and murder of Anita, a reporter working on a story of corruption and child trafficking. The atrocities Anita describes send Sydney and Blue on a quest across India after a dangerous and, up until now, untouchable, figure.

One of Sydney Rye's dearest friends, Hugh Defry, is accused of brutal murder. All the evidence points to Hugh, and he has no memory of that night. Sydney refuses to believe Hugh is capable of such violence. Sydney flies to Miami searching for the real killer, unprepared for the realization that her personal fight for justice has become more than she imagined. Sydney is forced to make a decision that will change not just her life, but possibly the future of vigilante justice.

Recovering from a near-fatal attack that left her with residual trauma, including haunting dreams and flashbacks, Sydney Rye is regaining her strength at the jungle training camp of Joyful Justice, the vigilante network inspired by her now legendary acts of vengeance.

However, when she runs up against an old adversary, he destroys the peace she found and puts her and Blue's lives in danger.

Cindy Segal
1,0 van 5 sterren Too much
27 februari 2018 - Gepubliceerd op Amazon.com
Geverifieerde aankoop
I did something I almost never do, stopped partway through a book and said "enough". Joyful Justice is neither joyful nor just. There is a legal system in place to determine if a crime has been committed And mete out justice. And Sydney's increasing ability to kill without regret is over the top as is her a screwing someone new in each book. I don't know why I didn't stop sooner... I guess I was hoping she's come to her senses.
Meer lezen
32 mensen vonden dit nuttig
Vertaal recensie in het Nederlands

Kindle Customer
1,0 van 5 sterren No!
14 januari 2018 - Gepubliceerd op Amazon.com
Geverifieerde aankoop
as a reader I resent being held hostage to a review in order to move on to another book! I loved the books but do not lock me into an endless loop!
Meer lezen
20 mensen vonden dit nuttig
Vertaal recensie in het Nederlands

Ellen Oceanside
4,0 van 5 sterren SYDNEY STRONG TAKE CHARGE WOMAN
7 november 2018 - Gepubliceerd op Amazon.com
Geverifieerde aankoop
STRING. OF GLASS
Sydney with Blue is in Goa, along with Dan her boyfriend. Checking on the internet, she notices that he had been looking into Joy. her birth name. Not responding to emails he sent Mulberry shows up. Telling her this is not her, she lives for justice and adventure. A kiss as he was leaving, She had never felt that electricity before. As she is sitting to quiet her thoughts a woman screams is heard. Sydney rescues her, and taking her back to the apartment, She was a reporter, and following a lead of children being abused and another shipment coming in. Sydney knows what she needs to do and with the information Lulu gave her. Good characters you feel your are part of the adventure
THE DEVIL’S BREATH
With Mulberry, Sydney is flying into Miami.Her dear friend Hugh is accused of murder, she doesn’t believe it of him and has come to find the killer. Shock first awaits for Hugh, thinking that she had been killed, but with Blue he would know it wasn’t true. A set up to get her out of hiding. Maxim, is someone she doesn’t trust, yet he comes, and wants her help to prove the murders are connected, with that of her brother, Her past friends, are challenging her, and things will never be the same. Great twist plot.
INVITING FIRE
Keeping her distance from the comrades at Joyful Justice, thinking that will keep them safe.Also it is hard for Sydney in following rules, it is not part of her. This picks up with her having effects from the poisoning in the last book, with having haunting nightmares and flashbacks. Some of the violence was a little to much. The three guys wanting her, was more than in the other two books before, didn’t add to the story. A mission didn’t go as planned with a commerce being killed. The plots are good. Sydney is a strong, take charge person with Blue added to the character of her.

D L
5,0 van 5 sterren I'm hooked
4 juni 2016 - Gepubliceerd op Amazon.com
Geverifieerde aankoop
Yes, these are adult books about adult concepts and situations. If it was a movie I'd say it's a thriller, adventure, action drama. The characters are so different and wonderful and improbable; and that's what makes for a very good read. I'll be reading all her books, sinking again into my alternate world of riveting pleasure.
Meer lezen
10 mensen vonden dit nuttig
Vertaal recensie in het Nederlands