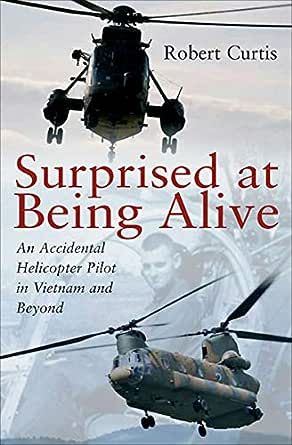 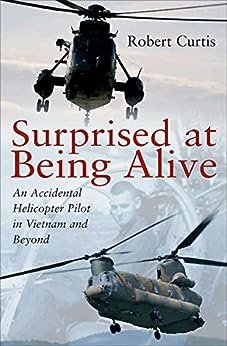 Surprised at Being Alive: An Accidental Helicopter Pilot in Vietnam and Beyond (English Edition) Kindle-editie

"one of those books that you read that gives you the feeling of Deja Vu, and makes the hairs on the back of your neck rise."--Neall Ellis

"Robert Curtis gives us a compelling account of his exemplary service in wartime and beyond. The combat missions he flew out of Phu Bai/Camp Eagle in Vietnam did so much for so many, and remain alive and meaningful for all of us today. "--Gary Matthews, American Ambassador (ret), Former Deputy and Province Senior Adviser, Thua Thien/Hue

"Curtis' eye for detail puts him in the top rank of my list of Vietnam War autobiographers. The precision of his style creates both the picture and the mood of acts as simple as crawling out of bed and shuffling to the flight line in the middle of the night. Curtis repeatedly refreshed my Vietnam War memories. His highly personalized description of helicopter action during Lam Son 719 is the most straightforward account of that operation I have read. What's more, Curtis injects historical references without breaking the narrative thread."--The VVA Veteran

"Curtis uses a particular wit and sharp descriptive skills to narrate his extraordinary career. He brings the reader right into the moment, whether in the cockpit of a Chinook in Vietnam, a CH- 46E on a pitching deck at night, or a Sea King navigating the fiords of Norway. Curtis was surprised at being alive when he passed his retirement physical. you will be surprised as well, with this great reading experience."--VHPA Aviator

"The author's time in Vietnam was action packed, flying over the DMZ, the Laotian border and Khe Sanh. During his time there, he heard NVA radar and radio signals, dodged enemy ordnance, and survived an enemy round through the helo windshield. . . . The danger of flying the aerodynamically complex helicopters in all kinds of rapid changing weather conditions and varied topographies required courage and skill. Curtis few training, transportation, supply and combat missions in climate regions from the Southeast Asian tropics to the storms, highlands and ice of the Arctic. . . . In 1992, Major Curtis retired from the military, "...surprised to still be alive.--Naval History Magazine

"provides a worthwhile journey into history and one man's multifaceted service. The work is recommended reading for all aviation aficionados."--20th Century Aviation Magazine

From flying with the Screaming Eagles in Vietnam to serving with the Marines and the Royal Navy, this memoir recounts the life of a career military pilot.

Sometimes it just isn’t your day. Whether your helicopter comes apart in flight due to equipment failure, or another aircraft runs into you in midair, or an enemy gunner lands his rounds in exactly the right spot to take you out of the sky. That’s why, after twenty-four years and more than five thousand flight hours with four armed services, Maj. Robert Curtis was surprised to still be alive when he passed his retirement physical.

His flying career began in the thick of the war, flying Chinooks over Vietnam with the 101st Airborne. From there, Curtis continued to serve with the National Guard while attending college. By then, flying had become an addiction for Curtis, so he continued on with the Marine Corps and Royal Navy. Over the next seventeen years, he would fly off US and British ships from Egypt to Norway and all points in between.

Curtis flew eight different helicopters—the wooden-bladed OH-13E, through the Chinook, SeaKnight, and SeaKing—in war and peace around the world. During that time, many of his friends died in crashes, both in combat and in accidents. But some combination of skill, luck, and superstition saw him through.
Alle bekijken
click to open popover

Davis0172
5,0 van 5 sterren Exceptional work and fascinating story
28 februari 2019 - Gepubliceerd op Amazon.com
Geverifieerde aankoop
I’ve read many if not most of the writings from former VN helicopter pilots. This one is slightly different and interesting as it follows the authors post VN military career. Riveting stories, well written, not too technical for non-pilots but plenty of detail for the aviation buffs. It’s a good book when you find yourself disappointed that you’ve come to the final page and wishing there was more. Thanks for the good read.
Meer lezen
4 mensen vonden dit nuttig
Vertaal recensie in het Nederlands

Amazon Customer
5,0 van 5 sterren Parables
25 september 2019 - Gepubliceerd op Amazon.com
Geverifieerde aankoop
A parable is a story used to teach a concept or philosophy. Consciously or not, I don't know, but the author has written a book of parables. Each story imparts a small piece of knowledge acquired through experience. Not training.

You can't train experience. It is acquired by working consistently over a period of time at your trade, craft or profession.

And it is priceless.

Leo B.
3,0 van 5 sterren Great except for gremlins in the translation to Kindle format
26 maart 2015 - Gepubliceerd op Amazon.com
Geverifieerde aankoop
Somehow the transition to Kindle version messed with the formatting of this book. Where it should have 100 or 250 or whatever it has JLL or KNL or similar. There are also numerous places with other formatting/editing errors. Were it not for the extreme number of such problems it would get at least one more star. It is an interesting story. It gives good insight to military service, Vietnam, differences in various branches and lots of other information. It also describes piloting helicopters and the challenges they present in such a way as to make you feel as if you are in the jump seat. I hope there is an updated Kindle version sometime that automatically updates. I'd like to read it again and get all the actual numbers for speed, altitude, etc..
Meer lezen
8 mensen vonden dit nuttig
Vertaal recensie in het Nederlands

Lakecottage
5,0 van 5 sterren One of the Best on Flying & Vietnam
2 september 2019 - Gepubliceerd op Amazon.com
Geverifieerde aankoop
This book provides a fairly accurate account of what it was like to fly a helicopter in the military and Vietnam 30-50 years ago. The author places the reader in the pilot's seat without the usual "modest" heroism of most similar authors and simply provides a picture--which is enough to make the point--which is that military helicopter flying can be very dangerous at times but is even more so in combat. But, it has its rewards and the author also makes that point. It is worth reading.
Meer lezen
Een iemand vond dit nuttig
Vertaal recensie in het Nederlands

Gary
5,0 van 5 sterren Just as promised in the introduction
16 maart 2019 - Gepubliceerd op Amazon.com
Geverifieerde aankoop
I really enjoyed the format of the book. The author stated at the beginning it was going to be his interesting experiences. This had the advantage of blocking out all of the uninteresting and repetitive things you find in all military books. Very little basic training and irrelevant detail of his life in general. The “flashback” portions were well handled. Not using the first person in all the narratives was also a great choice. Overall a long career was captured in a short book. And it was interesting!
Meer lezen
Een iemand vond dit nuttig
Vertaal recensie in het Nederlands
Ga naar Amazon.com om alle 80 recensies te bekijken 4,6 van 5 sterren
Terug naar boven
Over ons
Verkoop bij ons
We helpen je graag
© 1996-2020, Amazon.com, Inc. en dochterondernemingen