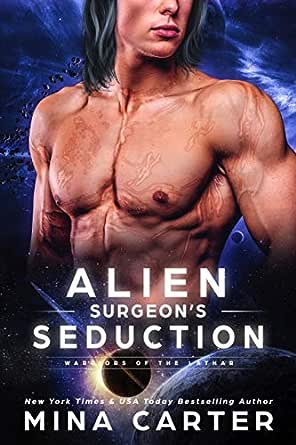 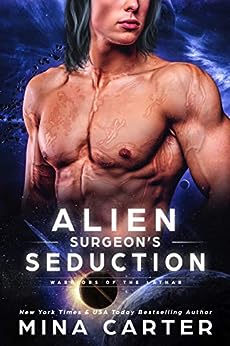 She was his the moment she stepped aboard. He'll fight everyone, even the emperor himself, to keep her...

Like most Lathar, First Healer Isan K'Vass didn't expect to ever find his mate. The genetic plague that had ravaged their race meant they had no females, and his tainted bloodline meant he would be last in line for one of the rare human females. Or it should.

Until a human combat team boards the Veral’vias and he see's HER. Flame haired. Curvy. Dangerous. And all his, if the secrets in his blood don't tear them apart first...

Aliens should not be hot. At all. Not ever.

Shannon Taylor had one thing on her mind when she boarded the alien vessel. Her mission. But no plan survives first contact with the enemy and her rescue mission goes sideways quicker than a cat on a hot tin roof. Finding herself the prisoner of the Lathar, and one, hot as hades healer in particular, she needs to keep her wits about her if she's ever going to get herself the hell of this alien ship.

However, the Lathar aren't as bad as she'd been told and it's all she can do to remember that Isan, her sexy healer, is the enemy. Only he's not, he kisses like a dream, and they end up on the same side on a mission into dangerous territory to root out an enemy to both their people.

But treachery lurks in the shadows and when Shannon is betrayed, will her warrior reach her in time. Or is their happily-ever-after over before it could begin?

Authors note: Book 10 in the Warriors of the Lathar Series. Books can be read alone, but for maximum enjoyment we recommend they are read in order.

RB
4,0 van 5 sterren Not even lunch, and I need a cold shower.
26 november 2019 - Gepubliceerd op Amazon.com
Geverifieerde aankoop
Holy guacamole, gals and guys. This book came out TODAY, and I took some early time off to read it. Honestly, you'd think I don't have a life, am old, lonely, and own a bunch of cats. Not true. I am 60ish, and have some cats, but I do have a life. Really. But the truth is, I'm a big big Mina Carter fan. And this series is a favorite.

This story is, IMO, much better than the last two, which was sadly disappointing to me. The H and h were much more dimensional with some interesting character traits. The H in particular had more depth than H's in the last book (broke my heart, that one). Isaan is a healer, and has a couple of secrets. I also really liked how some later revelations made some of the Lathaans a little less godlike. Awesome.

The h was also stronger than a few of the latest h's. Shannon has a more complex backstory that provides some richness to this story. Frankly I'd have liked to hear a bit more about that. Ok, though. I did find that she didn't interact at all with any other female characters. I missed that, as I know the females are still pretty isolated. A small point.

I also like the slight turns in the story. I won't reveal these so no SPOILERS here. But some of these turns will make for a richer series.

As always, Mina Carter writes a sex scene like nobody's business. Thanks for that!

This series is fantastic. If you are a new reader, I suggest starting at the beginning. I buy every book, even though you can get them on Prime. This author is worth it.

Denise
5,0 van 5 sterren Isan has taken on more than he can handle with his new Terran mate.
6 december 2019 - Gepubliceerd op Amazon.com
Geverifieerde aankoop
No one least of all Shannon Taylor a dedicated marine along with her team expected the outcome of trying to board a Lathar ship and abduct the Emperor Daaynal. They assumed their Intel was correct. But they were so wrong. Too bad nobody told them he was no longer there. Luckily Shannon had a back up plan nobody other than her team knew about. To rescue General Dani Black from the Lathar cells and hopefully get out in one piece. That plan also went so well that now Shannon and her team are now prisoners of the Lathar. One Lathar in particular has his sites set on Shannon telling her she is now his mate as he throws her over his shoulder to subdue her struggles. Now Dani and Shannon must convince the Lathars that the Terrans really do not want a war and the new Terran president Murphy is not like the other idiots who held power. Isan and Shannon will have to band together to hunt down Earth First the purists organisation who will do anything to disrupt any alliance they try to make with the aliens. There is so much action and romance in this book you really have trouble putting it down. A big thank you Mina Carter for the entertaining review book. I am also a verified purchase.
Meer lezen
Een iemand vond dit nuttig
Vertaal recensie in het Nederlands

Mo
5,0 van 5 sterren Alien Surgeon’s Seduction (Warriors of the Lathar Book 10)
27 november 2019 - Gepubliceerd op Amazon.com
Geverifieerde aankoop
Wow! Holy Moly! This was a bit of a veer from the usual Lather sagas. Healer Isan spots his mate when her Terran squad attempts to capture the Emperor. He immediately takes her into his care. Every warrior on the battleship knew to steer clear of Shannon, now that Isan has laid claim. But it is more then just his title or warrior prowess. Isan has blood fever, a killing fever fine in battle, but.....He never expected to find a mate. Those with this affliction do not mate, so how? Why? When a radical earth group attempts to assasinate both the Terran president and the Emperor, the 2 peoples need to work together to stop this threat. Isan and Shannon are paired to infiltrate the hideout. But when truths come to light, secrets revealed, can they find a way to be together?
I loved the layers in this story. I was not pleased about how some beloved characters acted in the past and the repricussions still felt today. Hopefully this will be explained in later stories. Such sadness for the Lather. Such burdens to carry. I really want every one of them to get their HEA. Cannot wait for the next installment

Amazon Customer
3,0 van 5 sterren Bit disappointed
2 december 2019 - Gepubliceerd op Amazon.com
Geverifieerde aankoop
I basically never write a review. I also very rarely give less than 4 stars as I feel authors put their heart and souls into a book and that should be appreciated. However, there is a line in this book that made me quite sad that an author I had liked could put this in her book. Its the line about people fighting for religion fighting for imaginary friends. Obviously the author and anyone else has the right to their opinions. I just didn't expect cheap shots at people with faith in my romance novel. Write it in a blog, put it in a podcast but please don't attack personal life choices in a romance novel about aliens. I still gave 3 stars because I did like the story and the author is entitled to her opinion.I just doubt I will be buying this author again because I get enough aggression from the world on a daily basis without having to get it in the very little time I have to relax.
Meer lezen
2 mensen vonden dit nuttig
Vertaal recensie in het Nederlands

Stacy Harper Watson
5,0 van 5 sterren A Hot Wild Ride!
26 november 2019 - Gepubliceerd op Amazon.com
Geverifieerde aankoop
Here is the next installment in the extremely exciting world of the Warriors of the Lathar by Mina Carter. I’ve been waiting anxiously for this next installment in the series and was very happy to finally have it in my hands. The book starts out with our female main character, Shannon leading a human military sneak act against a Lathar ship that Isan is the head doctor on. Isan immediately feels a connection to Shannon. There is action, drama, humor, hot sexy times and warm fuzzies. I really think this is one of my favorite books in this series!! Loved it!
Meer lezen
Een iemand vond dit nuttig
Vertaal recensie in het Nederlands
Ga naar Amazon.com om alle 90 recensies te bekijken 4,8 van 5 sterren
Terug naar boven
Over ons
Verkoop bij ons
We helpen je graag
© 1996-2020, Amazon.com, Inc. en dochterondernemingen