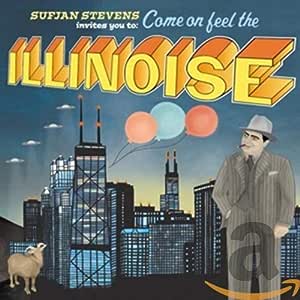 Since the 2003 release of his third album MICHIGAN and 2004s SEVEN SWANS, Sufjan Stevens has been recognized as on of the most talented songwriter-performers in independent music. ILLINOIS, the follow-up to MICHIGAN in his "50 States" project, again demonstrates his ability to realize a music vision through his moving songs, musicianship (he plays 25 instrums on the album), production and arrangments. While some musical and literary influences are felt and heard, Stevens' total involvement in every phase of the project results in a thoroughly unique result. On his second meditation on an American state, a 22-track anthematic tone poem for Illinois, Stevens weaves variegated musical styles and instrumental textures into a tapestry of person famous, infamous and anonymous, and places iconic, obscure and abandoned. Love, loss, faith, the unique character of place, encounters with spiritual stength in unexpected places, incomprehensible horror and celebratory odes to the rise and fall of human works are among the themes Stevens visits in his ode to the Prairie State.

CHRYSOAR
5,0 van 5 sterren The highest art form
20 mei 2019 - Gepubliceerd op Amazon.com
Geverifieerde aankoop
What can I say? Every song on this album has its own nuance. No commercial beats here. Some songs haunting; others, evoke certain innocence while still others have a soulful funk. Even the instrumental tracks carry their own emotional strength. I could hear this album all day, even the individual songs. I also love how he doesn't have a problem singing about same-sex love. He's quite the storyteller. I mean who sings about John Wayne Gacy? I just love this guy!!
Good job, Mr. Stevens!

C. Wynes
5,0 van 5 sterren Easily this year's greatest album, it might be the album of the decade
4 september 2005 - Gepubliceerd op Amazon.com
Geverifieerde aankoop
Sufjan's latest album vacillates musically from soul-searching folk tunes to big, complex, multi-layered production numbers that would be perfectly comfortable in a broadway show. It is an entralling emotional journey that takes us to the depths of Sufjan's darkest moral nadirs to his most triumphant and hopeful epiphanies.

Never before has an album struck me as being such a complete statement about the human condition. Perhaps it is Sufjan's Christian faith (which is slightly less of a focus on this album than on the two previous albums) that allows him to hold such an odd combination of despair and distress supplemented by boundless hope for the future. Take this as a lesson for the bland musical artists who market themselves to the evangelical Christian crowd, Sufjan's music is what you can do when you simply let your faith inform and inspire the music rather than just use the music as a cheap evangelization tool. (I should be sure to say that despite the obvious Christian influence, this is not preachy music and it can be -- and is -- enjoyed by persons of all faiths and no faith at all.)

The songs are all loosely based on historical and geographical trivia of the state of Illinois. As with his previous album "Michigan", Sufjan uses these structures as a jumping-off point for a more complex exploration of the human experience.

Musically, Sufjan employs a variety of styles. Some of the tracks are relatively simple acoustic folk arrangements. Other tracks, such as "Come on Feel the Illinoise", "Chicago", and the powerful almost-finale "The Tallest Man, the Broadest Shoulders", exhibit compexity in layered arrangements supported by orchestra and horns and a full chorus. Syncopated rhythms and uncommon time signatures are employed to their fullest.

The album cannot be described adequately in words, because so much of its power is in its undeniably magnificent emotional impact. It is pure beauty. It is not overstatement to say that it will surely be considered a candidate for greatest album of 2005, and I believe it may be the greatest album of the decade thus far.

J. Chasin
5,0 van 5 sterren A Folky "Smile" for Now People
23 augustus 2005 - Gepubliceerd op Amazon.com
Geverifieerde aankoop
There is a riot going on in popular music right now, something called "New Folk" or "Neo-Folk." The practitioners don't really sound alike-- Animal Collective, Iron & Wine, Devendra Barnhardt, Stevens-- but together these artists comprise an important school of contemporary music: organic yet lush, in some cases challenging traditional song form, borrowing from the sounds of traditional folk and folk rock but assembling them in wholly new ways, and managing to avoid evoking James Taylor or Dylan or any of their forebears from before 1990.

This album is a masterpiece of the genre (if Neo Folk is indeed a genre as opposed to a scene), and it is a true gem that will only get better with age. You probably know Stevens intends to do an album about each of the 50 US states, and has already done one about Michigan. Come On Feel the Illinoise is difficult to pigeonhole with "sounds like" comparisons-- acoiustic guitar, gentle vocals, quirky vocals, woodwinds, odd keyboard tones and off kilter rhythms drift in and out. I'll try and define the epicenter of the sound by using these three points: Brian Wilson's grander, more orchestral work; Joni Mitchell; and Phillip Glass. But of course, that doesn't do the album, or the artist, justice.

Illinoise is an album that demands to be heard in sequence, in its entirety. Songs flow into one another, and the work is a singular one, not a bunch of songs assembled and released. You can play this in the background while doing something else; for friends at a social gathering; or on headphones while listening intently to every nuance. It will reward in each setting.