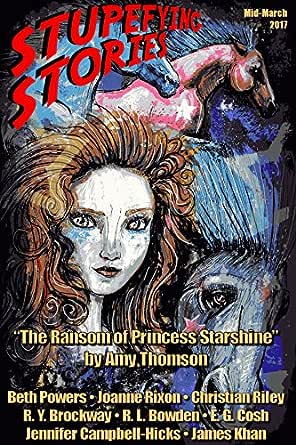 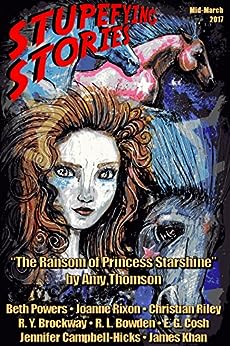 FISH AND FOOLS • by Beth Powers

“Oftentimes, I ask a listener to select the staff and thus guide the tale. But on nights like this,” the howling wind obligingly rattled the tavern windows as the Carving Bard paused to select an arrow-straight length of silvery wood from her bundle, “in places that border the wildlands, one tale always screams to be told...”

THE LIBRARIAN AND THE TROLL • by E. G. Cosh

Winkleton Manor was the sort of place where absolutely nothing disrespectable ever happened—until Maud McInerney-Smythe left an old volume of Scandanavian poetry unread for just a little too long...

STAR COME OUT • by Joanne Rixon

These are the machines that keep me alive: the CPAP machine that keeps me breathing while I sleep, my customized electric wheelchair, and my speech-generating vox system. To me it’s the difference between life and death, between being and nothingness. When people hear me speak, they pity me. I don’t need their pity, though. I’m a poet with a robot voice. How cool is that?

Her name is Georgia, she’s my peach, a laugh sweet as honey and with eyes like wine, they could make you handsome drunk just looking at them. She knew that about herself, my wife did. And I think that fueled her, kept her spirit on the move. Perhaps that’s why she was always running...

THE RANSOM OF PRINCESS STARSHINE • by Amy Thomson

Vartan guided his horse closer to the sound of girlish laughter coming from just beyond the willow copse. He motioned to his warriors to spread out. With luck, the girls would think the horse was a browsing joota, and he could kidnap a fine bride for his brother...

Arnold was just getting used to the fact that he’d never see his mother again when the University called about the matter of her office. When he found the old photo in her desk’s bottom drawer, he knew he’d found something special—and a mystery...

He didn’t look strange to start with, but I guess that comes down to the blinkered vision you adopt on public transport in London. The kind that means you can spend an hour crushed against another human being, so close you’re tasting each other’s breath, but you’re barely able to recall the colour of their hair or what they were wearing... When you're talking to the police, afterwards.

THE WITCH’S KEY • by Jennifer Campbell-Hicks

In the maze under the bright sunless sky, the witch gave me an easy way out. All I had to do was follow the cat—obey the rules—and stay alive...

THE PRACTITIONER • by James Khan

At 8:07 A.M., the Rumpke landfill stood as the second largest in the United States. It reached 1,672 feet at its peak, could be smelled from a mile away, and seen from as far as two. It was such a landmark that the citizens called it Mount Rumpke.

At one second after 8:07 A.M., Mount Rumpke ceased to exist. In its place stood a meadow of lilies...
click to open popover

LJS3
3,0 van 5 sterren Good, but not the best issue
11 januari 2018 - Gepubliceerd op Amazon.com
Geverifieerde aankoop
Probably my least favorite issue of Stupefying, mostly for the tedious "The Ransom of Red Chief" retread, but stating that this is my least favorite issue does not in any way mean it is bad. The content remains inventive and intriguing for the most part. A sure win with me will always be combining professional wrestling with sf, fantasy, or horror, which "The Jaguar's Son" does quite well, but the "The Witch's Key" is my favorite overall story. There's usually at least one story in each issue that I believe should get an award nomination, and Jennifer Campbell-Hicks takes home that prize, this time.
Meer lezen
Vertaal recensie in het Nederlands
Ga naar Amazon.com om alle 1 recensies te bekijken 3,0 van 5 sterren
Terug naar boven
Over ons
Verkoop bij ons
We helpen je graag
© 1996-2020, Amazon.com, Inc. en dochterondernemingen