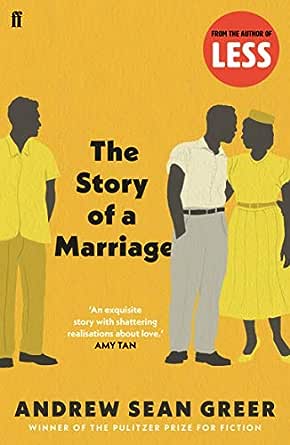 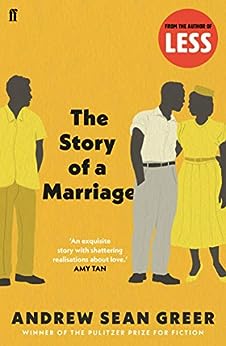 The Story of a Marriage (English Edition) Kindle-editie

"Inspired, lyrical . . . Mr. Greer's considerable gifts as a storyteller ascend to the heights of masters like Marilynne Robinson and William Trevor. . . . [He] seamlessly choreographs an intricate narrative that speaks authentically to the longings and desires of his characters." --S. Kirk Walsh, The New York Times

"Andrew Greer writes with an aching clarity of the heart. This is an exquisite story with shattering realizations about love." --Amy Tan, author of The Joy Luck Club and Saving Fish from Drowning

"This is a haunting book of breathtaking beauty and restraint." --Dave Eggers, author of A Heartbreaking Work of Staggering Genius and What Is the What

"Greer doles out revelations with grace and precision. . . . [His] prose is unerringly poetic . . . . What can be seen plainly on every page of this slim, lovely novel is Greer's prodigious talent." --Connie Ogle, The Miami Herald

"Bewitching . . . A book whose linguistic prowess and raw storytelling power is almost disruptive to the reader. It's too good to put down and yet each passage is also too good to leave behind....Every twenty pages or so, the plot implodes and the characters reveal themselves." --Devorah Vankin, Los Angeles Times

"The chronicle of one marriage, closely and elegantly examined . . . The new novel is built on several narrative surprises that cannot (or should not) be revealed. . . . The Story of a Marriage is more than worth the reader's attention. It's thoughtful, complex, and exquisitely written." --Carolyn See, The Washington Post

From the Pulitzer Prize-winning author of Less.

'A riveting and fascinating novel full of stunning observations and brilliant moments of truth and sympathy.' Colm Tóibín

It is 1953, and in San Francisco Pearlie, a dutiful housewife, finds herself caring for both her husband's fragile health and her polio-afflicted son. Then one morning someone from her husband's past appears on their doorstep. His arrival throws all the certainties by which Pearlie has lived into doubt, and is brought face to face with the desperate measures people are prepared to take to escape the confines of their lives.

Leapyear
5,0 van 5 sterren Wow. Perfection.
6 juli 2018 - Gepubliceerd op Amazon.com
Geverifieerde aankoop
Having just last month read Mr. Greer’s more recent, deservedly Pulitzer Prize winning novel, “Less”, I was so profoundly impressed I instantly bought everything of his ever published. When when the time finally felt “right” to read another Greer, I selected “The Story of a Marriage”. And, I, kinda nervously, began reading. It was almost as if I was seeing the pages from between the fingers of the hand I’d, metaphorically, covered my face with, as if anticipating what the babysitter would find in the basement. I was afraid that, reading anything written by Mr. Greer other than “Less” would... effect, alter, place into a limiting context, the truly transcendent experience I’d had reading it. It is one of the most astonishingly brilliant books I have ever read (and I’m a big reader). My fingers fell when I reached the second sentence. Wow. This book is neither “Less” nor less. It is indeed quite different in tone, and is written within a considerably tighter scope, but it is, while “different”, possessed of its own startling beauty. It’s own instant fascination. Interestingly, “... Marriage” May seem to be more traditionally “Pulitzer Prize Winning Novel-ish” than “Less” in that it is painted with more traditionally “literary”, in other words “less humorous” strokes. Indeed, some reviews I’ve read of “Less”, while unfailingly positive, deemed it unworthy of such a “serious” literary prize for that very reason. It is as funny as hell. While reading “Less”, a book that ultimately left me a happily-sobbing wreck, I laughed out loud scores of times. I heartily guffawed. I called friends to read aloud to them some particularly riotous passages. But, the genuinely genuine humor Mr. Greer chose to tell that particular tale was entirely and gorgeously appropriate. It lifted the novel into even higher literary airspace, never undercutting the novel’s legitimacy as a work of true literary alchemy, his decision to playfully switch “tones” on a single WORD, a segment, then immediately plunge you into the colder waters of tragedy, only to, a sentence later, have you howling as warm tears run down your face, is an essential string of the book’s daringly unique DNA. Now that I have read “... Marriage”, and in one delighted sitting, I am astonished by BOTH of Mr. Greer’s accomplishments. Most writers want to utilize everything in their toolbox whether building a theme park or a birdhouse. Not Mr. Greer. While “Marriage” is hardly humorless, Mr. Greer makes use of only those tools appropriate and necessary in the building of each structure. And, I am truly STUNNED. One can discern that it’s the same writer (by looking at the front cover), but, MAN, each book is entirely and uniquely itself! “Marriage” is of the same caliber as “Less”, it always hits it’s bullseyes, but the projectiles used here are more consistently bullets to the heart, where in “Less”, if less and less as it gathers in power, will just as likely shoot confetti or little signs that say “Bang”. Ultimately, both books are devastatingly beautiful, embracingly human and damned enlightening. But, “Marriage” sets a tone, stays with it, and yet is equally and clearly (and incredibly movingly) the work of an absolute genius. “Marriage” is highly entertaining, wildly surprising, oddly thrilling and masterful in its dedication to “stay within the lines” of the world it creates. Obviously, my initial wariness was unfounded. “Marriage” is its own brilliant book. It’s own work of art. It’s pallet is uniquely consistent, a constantly joyful experience, and both a heart-breaking and heart-filling masterpiece.
Meer lezen
33 mensen vonden dit nuttig
Vertaal recensie in het Nederlands

Claire
2,0 van 5 sterren If you loved "Less", stay away from this one
25 februari 2019 - Gepubliceerd op Amazon.com
Geverifieerde aankoop
I read Greer's "Less" and loved it; this book is no "Less". In fact, it is hard to believe Story of a Marriage was written by the same author. The story is totally implausible and one is manipulated by the occasional surprise — the problem with the “surprises” is that they aren’t even vaguely believable. There are flashes of interest, places where I was almost swayed into believing this story but then the good writing would be cut short and it would be back to the strange unevenness of the whole plot, and back to feeling manipulated.
My main problem with this book isn’t just that it was so hard (impossible?) to suspend one’s disbelief, but that the characters were so so flat and less than one-dimensional. They are all like zombies wandering through the contrived plot. We never hear from the husband (around whom the story revolves) at all, and even the internal thoughts of the wife are so flat and shallow that you don’t know her or what makes her tick at all. As a result, it is impossible to understand why she makes the stupid decisions she makes, over and over. And through it all we never get one “real” conversation between husband and wife. I kept thinking “surely they are going to clear the air!” But no.
In hindsight this was a very annoying story and I’m wondering why I spent the time sticking it out. I recommend passing on this one.

Without given away the core of the relationship among these three, I will say that the author offers a poignant look into the hearts of one woman and two men whose lives come together during six months in San Francisco.

Eric Selby
5,0 van 5 sterren Filled with Depth and Content
30 november 2012 - Gepubliceerd op Amazon.com
Geverifieerde aankoop
Set mainly in San Francisco in the early 50s but with back stories in World War II and some set in Kentucky, the novel is told by Pearlie who, during World War II, leaves Kentucky to work in the war industry and in so doing she meets for the second time--the first was back in Kentucky--Holland who was rescued in the Pacific when the war ship was sunk, the meeting having taken place in San Francisco. They marry. They have a son, Sonny. He becomes a polio victim. And then Buzz enters the scene. Pearlie and Holland are black--called Negroes back then as we all know--and Buzz is white. And I am not going to tell you more than that because that would be a spoiler.
Pearlie's first-person voice is authentic and believable. My yardstick for first-person narrative is Harper Lee's brilliant and beloved "To Kill a Mockingbird." Nobody can touch Scout as a narrator. But Pearlie comes close. She is very believable.
The details from the 50s are wonderful and accurate including the horrors of what happened to Ethel Rosenberg. There are wonderful little pieces of history and Mr. Greer has tossed in to make this so authentic. This I know because I well recall the girls wearing their pony skirts, those liquids held together by wax that we kids liked including those formed int the shapes of teeth and moustaches.
But the novel is really unique because of the relationships that I won't write about. So unique and for me very realistic. I am gay. That's as much of a hint as you get. And I was married to a woman years ago.
For the one-star reviewers who say this lacks depth and content, I guess they just didn't read the same wonderful novel that I have just finished. And I have ordered mor Greer fiction.
Meer lezen
13 mensen vonden dit nuttig
Vertaal recensie in het Nederlands
Ga naar Amazon.com om alle 118 recensies te bekijken 4,0 van 5 sterren
Terug naar boven
Over ons
Verkoop bij ons
We helpen je graag
© 1996-2020, Amazon.com, Inc. en dochterondernemingen