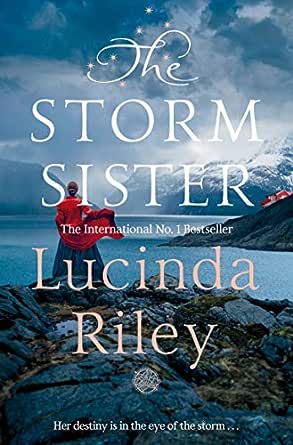 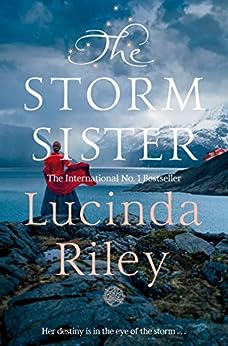 Following the bestselling The Seven Sisters, The Storm Sister is the second book in Lucinda Riley's spellbinding series based loosely on the mythology surrounding the famous star constellation.

Ally D'Aplièse is about to compete in one of the world's most perilous yacht races, when she hears the news of her adoptive father's sudden, mysterious death. Rushing back to meet her five sisters at their family home, she discovers that her father – an elusive billionaire affectionately known to his daughters as Pa Salt – has left each of them a tantalizing clue to their true heritage.

Ally has also recently embarked on a deeply passionate love affair that will change her destiny forever. But with her life now turned upside down, Ally decides to leave the open seas and follow the trail that her father left her, which leads her to the icy beauty of Norway . . .

There, Ally begins to discover her roots – and how her story is inextricably bound to that of a young unknown singer, Anna Landvik, who lived there over a hundred years before, and sang in the first performance of Grieg's iconic music set to Ibsen's play 'Peer Gynt'. As Ally learns more about Anna, she also begins to question who her father, Pa Salt, really was. And why is the seventh sister missing?

The second book in the spellbinding and sweepingly romantic SEVEN SISTERS series by bestselling author Lucinda Riley. Follow Ally, a talented sailor, as she embarks on her journey to a museum in Norway - chasing the clue her beloved but elusive father left for her.

Welsh Corgi fan
5,0 van 5 sterren Superb and riveting entry in the Seven Sisters series
14 april 2016 - Gepubliceerd op Amazon.com
Geverifieerde aankoop
This second entry in the Seven Sisters series is as superb as the first. The story is riveting, the characters are engaging, and the settings are fascinating. The parallel stories are (1) the saga of the second of Pa Salt's daughters, Ally, as she seeks her biological roots at his instigation after his apparent death and (2) the lives and loves of Ally's ancestors in the Norwegian and German music worlds of the 1870s and the 1930s.

Like the first in the series, this book pulls you in to the worlds it evokes. I eagerly await the third in the series, adumbrated at the end of this one with a tantalizing glimpse of Star's story. When completed, the seven volumes will be a magnificent opus, and one of which any author would be proud.

I have only one small criticism: Ms Riley (or her copy editor) needs to work on pronouns, specifically on the correct use of "I" and "me" and "we" and "us."

PB
4,0 van 5 sterren Book 2 is Worth Your Time
25 januari 2018 - Gepubliceerd op Amazon.com
Geverifieerde aankoop
This is book 2 of a 7 book series, I liked the first book Seven Sisters, and I enjoyed this book. Riley managed to make seamless the storyline of the past and the present and their connection. This book centers on the sister called Ally, her loves, heartaches and stamina to push forward even in the worst of times. The author leads us on a trip back into the past as Ally researches where she came from and who were her real parents.

As with all of Riley's books, there are twists, some you see coming some you don't coupled with historical background information weaved into the plot. I liked this book but not as well as the first book, and yes I have started the 3rd book in the series. I enjoy family sagas and this seems to be a really interesting series with the author's use of each sister having her own story, present and past, hopefully it continues to be interesting , and has a surprise ending, having said that, I will say these books have a way of pulling you in, where you say ok " I'll give the next a try" so if you start reading be prepared to be reading all 7 !

IMHO I do think this series is worth the read.
Meer lezen
Een iemand vond dit nuttig
Vertaal recensie in het Nederlands

Deborah Redmond
3,0 van 5 sterren Interesting story line against historical events.
17 augustus 2018 - Gepubliceerd op Amazon.com
Geverifieerde aankoop
This is the second in the series. You really need to read these books in order. The two so far follow a similar theme. There are three ( or more if you count the different generations) different stories going on. Firstly: Present day with Ally one of the sisters following the clues her adoptive father left for her to trace her birth parents.
Secondaly: The story of the parents - with plenty of fwists and turns so that nothing is as it first seems.
Finally: The clues drip fed in each book of who the adoptive father is and how he knows about the plight of the mothers and the connection to him. Also how he made his money and the strange burial at his death.
The story keeps you reading to see how it all fits together. The style of writing I found a little stilted but the story kept you interested and I didn't notice that so much the more I got into the story.
Meer lezen
Een iemand vond dit nuttig
Vertaal recensie in het Nederlands

Donna J. Parkinson
5,0 van 5 sterren Thoroughly engaging!
18 juni 2016 - Gepubliceerd op Amazon.com
Geverifieerde aankoop
This is my 4th Lucinda Riley book, and I've been captured in each of the stories, which always have many layers of narrative like a fine wine and always like good wine with a long and satisfyingly lovely finish. Her research is thorough and impeccable. I learn lots about the countries and people where she sets the stories, and I am compelled to search for images of places, famous people and buildings that exist as the stories are set with historical facts interwoven. I highly recommend the Seven Sisters and the Storm Sister in that order and can't wait for publication of the 3rd sister's story! Get the audio of Seven Sisters. It's great! I've sent it to half dozen friends
Meer lezen
4 mensen vonden dit nuttig
Vertaal recensie in het Nederlands

Anja
4,0 van 5 sterren The second one in the series
15 september 2019 - Gepubliceerd op Amazon.com
Geverifieerde aankoop
I loved the story about Maia, which is the reason I bought this book as well. I found Ally's story a little too long winding. The story about Anna and Jens was dragging on to my feeling, even though it had some interesting tidbits in there.

I do think that writing a story about so many sisters is a major task and Lucinda is doing a good job so far. I love how Ally found her roots and that she even finds family she had no idea she had, and how the little hint Pa Salt had left her, came to be a major significance.