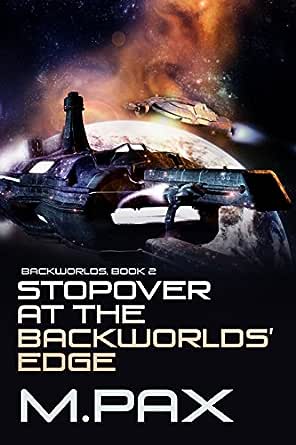 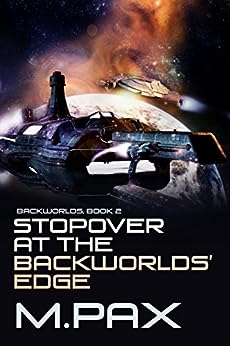 Nothing sane travels the starway. Today it brings disaster.

In the far future, humanity settles the stars, bioengineering its descendants to survive in a harsh universe. This is the second book in the science fiction series, The Backworlds. A space opera adventure.

Revenge is on Craze’s mind. He chews on it every day along with the relentless dust on Pardeep Station. He dreams of grander wealth, enough to make his father choke.

That’s the dream consuming him when the interstellar portal opens, spitting out a ship that should no longer exist. A battleship spoiling for a fight. Yet the war with the Foreworlds ended two generations ago.

One wrong move and the shaky truce will end. So will Craze and his friends.

Doug Bittinger
4,0 van 5 sterren Another imaginative tale from MPax
10 oktober 2012 - Gepubliceerd op Amazon.com
Geverifieerde aankoop
Stopover at the Backworlds' Edge is the second book in Mary Pax's Backworlds series about bio-engineered human life forms that were created to be able to thrive in the harsh environments of planets that are not exactly, "Earth Normal".

In this tale we find Craze and his new-found friends from the first book encamped at Pardeep Station, a sort of rest stop along the galactic interstate system, except Pardeep is out in the sticks, galactically speaking, and not an especially inviting place to go.

Craze has established his own tavern, serving the occasional starship that arrives at Pardeep. An old military ship arrives and discharges a form of engineered human life that was thought to be extinct - and her army of shadows. She brings news that the small group of friends has a traitor among them and that traitor has brought an old enemy bent on recovering a secret weapon stashed there long ago. With the arrival of this ship the life of everyone on Pardeep Station is now at risk.

This tale continues the tradition started in the first book of incorporating chocolate as a key element in the story. Stopover also has a love-interest for Craze, but again it's a rather quirky situation. Poor Craze - will he ever find a stable relationship?

As we have come to expect from M.Pax, this book is not only quite imaginative, but also expertly written and edited. The story steps along at a sprightly pace and holds the readers interest well. The characters are well developed and we are pulled into their amazing situations.

The only negative reaction is the rather frequent use of the word "shit". Most readers will likely not be bothered by this at all, but this reviewer's puritanical sensibilities reacted badly to it. Not badly enough to cause this book to be laid aside - as he has been known to do with weaker stories - but it did detract some from the enjoyment of it.

Another excellent story has emerged from the mind of M.Pax, employing elements of mystery, action adventure, and romance all rolled into a solid science fiction wrapper.

Susan Flett Swiderski
4,0 van 5 sterren Who Do You Trust?
10 december 2013 - Gepubliceerd op Amazon.com
Geverifieerde aankoop
Are you familiar with the "sophomore slump?" That's when a ballplayer plays like a phenom his first season, makes the cover of "Sports Illustrated" as rookie of the year, and then his second season, all the poor slob can do is set records for most errors and strike-outs. The same sort of thing can happen to a writer, too. Sometimes, a writer knocks it out of the ballpark with the first book in a series, only to fall flat on his face with the second one: a la sophomore slump, the second book... stinks.

Let me tell you just a little about THIS Book Two:

Craze doesn't know who to trust, but who could blame him? After all, the female he was planning to marry betrayed him, and even worse, so did his own father. It's their fault he got exiled. Because of their betrayal, he's still trying to eke out a living way out in the boondocks, in the dangerous badlands of outer space known as the Backworlds. He and his friends, a handful of bizarre beings, are now living and working on a dust-choked waystation, where they hope to find peace and make their fortune. But that isn't to be, because... one of them is a snitch.

Yep, it's happened to him again. Somebody betrayed them. Somebody gave away their location to a gang of sadistic soldiers, and now they're all in danger. Can Craze and his friends... and the snitch... outsmart the rogue soldiers from the Foreworld, or are they all doomed to die in the godforsaken dust?

Remember that sophomore slump? Well, Pax doesn't have anything to worry about. If she were a ballplayer, her face would be smiling from that magazine cover again. I enjoyed this second book of the series just as much as the first. Matter of fact, just because this author avoided the dreaded sophomore slump, I'd give this book 4 1/2 stars. Something tells me she has a lot more good seasons in her.
Meer lezen
Een iemand vond dit nuttig
Vertaal recensie in het Nederlands

Angus
5,0 van 5 sterren The plot matures...
13 oktober 2013 - Gepubliceerd op Amazon.com
Geverifieerde aankoop
Stopover is the second book in the series and picks up where Backworlds left off with Craze the protagonist trying to make the best of being stranded in a fetid hole called Pardeep Station. He's been very MacGyver at building his business of choice and trying to grasp at his life goals. All he needs are customers, that pay. Well, he also would like a certain romantic interest of his...to show some interest in him.

The inciting incident is a hostage driven adventure brought on by the arrival of some very unwelcome customers of the 'we own you variety' and the chase begins. Building the environment that is Pardeep Station the author has hit on a stroke of awesome by detailing dust lakes, atmospheric chemistry and how these affect the variants of human that are characters in the series. Frizzers and Blusters are the weapons in play on the outside as more sinister ones are sought.

I read the first enjoying the excellent craftsmanship of Backworlds and I'm very glad to say I was not disappointed in the second book. This author seems to have her method dialed in and it shows.