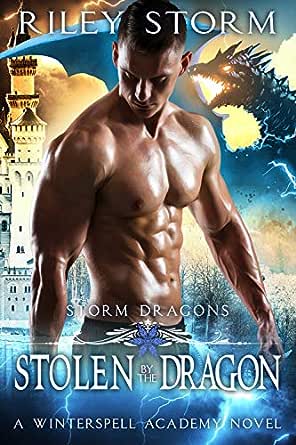 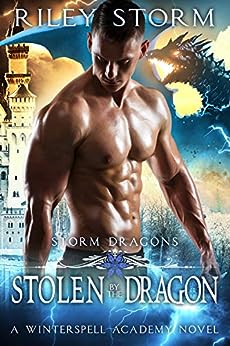 He thought he’d lost everything, but then he found her…

The only thing on Damien’s mind is ensuring his race will live on. It’s that single-minded focus that drove the storm dragon through the magical portal, the last of a small band of dragons fleeing an ominous and powerful enemy. When he’s confronted on the other side by a short, sassy and deliciously curvy woman with powers he can’t comprehend, everything changes. He should be focusing on the future of his people, but all he wants to do is focus on her. His dragon is roaring wildly and he doesn’t know how much longer he can resist its call.

Anna Sturgis has trained all her adult life at Winterspell Academy. She’s ready to face any of the usual paranormal threats. Werewolves, vampires, Faeries, she’s prepared for them all. What she can’t fight is the sizzling attraction she feels to one dragon shifter in particular. Her studies are beckoning, but the siren call of the muscular male is more luring than anything she’s felt before. If she can’t learn to resist his smile, then she’s going to succumb to him completely.

Their nightly rendezvous are strictly forbidden by both sides. Secret passages are their respite, where they are free to explore the connection between them. That is, until everything is exposed, leaving Damien with but one choice. He doesn’t want to do it, but it’s the only way to save Anna. In the process though, he might just put her in even greater danger. Because the evil the dragons thought they left behind isn’t about to give up…

Damien and his people are going through a portal to a different planet to get away from the sick evil on their own planet.

They land on earth in the snow near the witch academy.
Anna and her patrol see them coming through the portal.
They bring them with them to the academy.
But not everybody trusts them.

The friendship and more between Damien and Anna gives a lot of trouble.

Will love win or not?
For that you have to read the book, if you like a good book about witches and dragon shifters you won't regret reading it.

Rgrainer
5,0 van 5 sterren Powerful introduction to a new series!
11 januari 2020 - Gepubliceerd op Amazon.com
Indeling: Kindle-editieGeverifieerde aankoop
Wow! This is possibly the best story I have read by Riley Storm. I would give it more stars of I could! She creates a whole new world and multiple different issues. The story is tightly written with no editorial issues. The characters are so vibrant that you are just pulled right into their lives and situations. Anna is on a patrol when these people come through a portal. They don't seem like they came from the Abyss where all the evil magical beings exist, but what are they? Damien is one of the last dragon shifters to leave their doomed world of Dracia with a few adults and 5 kids. Anna doesn't know what to make of them, so she offers them refuge and takes them to the Coven for a final decision.

The pace is breakneck, the tone is positive and the storyline is character oriented with some action and some steamy scenes. The characters are vivid and complex. I can't wait to see what happens next! If you like dragons, strong female characters and a battle against an evil out to destroy Earth, then this is for you. It seems to be totally unrelated to the other series by Riley Storm. So you can read this to get drawn into a new and fascinating world! Enjoy!
Meer lezen
3 mensen vonden dit nuttig
Vertaal recensie in het Nederlands

Sara Munoz
5,0 van 5 sterren Stolen by the Dragon
23 januari 2020 - Gepubliceerd op Amazon.com
Indeling: Kindle-editieGeverifieerde aankoop
This is a very well-written book 1 in the Storm Dragons that has very strong main Characters and a great story. These characters are exciting, have chemistry, and are well-constructed. I cannot wait to read more in this series. A must read from a great Author and is one of her best books to date.

I received a free copy of this book via Booksprout and am voluntarily leaving a review.
Meer lezen
Vertaal recensie in het Nederlands

Kindle Customer
4,0 van 5 sterren Okay
28 januari 2020 - Gepubliceerd op Amazon.com
Indeling: Kindle-editieGeverifieerde aankoop
Enjoyable story of dragons fleeing there planet due to an invasion. They travel through a portal and end up on Winterspell Academy property. Winterspell is where witches are trained to enhance their powers. Anna is the witch leading the patrol the day the dragons are spotted. She feel an instant pull towards Damien. There is an HEA after a few surprises.
Meer lezen
Vertaal recensie in het Nederlands

Lucinda B
5,0 van 5 sterren Great read!!
21 januari 2020 - Gepubliceerd op Amazon.com
Indeling: Kindle-editieGeverifieerde aankoop
This was another great book that I could not put down! I loved the start of this new series and the characters were great! I would highly recommend it to others!

I received a free copy of this book via Booksprout and am voluntarily leaving a review.
Meer lezen
Vertaal recensie in het Nederlands