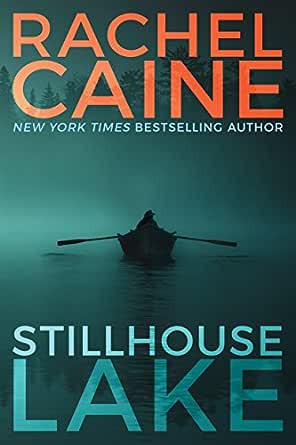 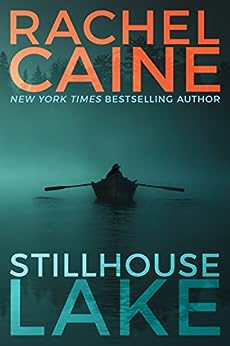 Gina Royal is the definition of average—a shy Midwestern housewife with a happy marriage and two adorable children. But when a car accident reveals her husband’s secret life as a serial killer, she must remake herself as Gwen Proctor—the ultimate warrior mom.

With her ex now in prison, Gwen has finally found refuge in a new home on remote Stillhouse Lake. Though still the target of stalkers and Internet trolls who think she had something to do with her husband’s crimes, Gwen dares to think her kids can finally grow up in peace.

But just when she’s starting to feel at ease in her new identity, a body turns up in the lake—and threatening letters start arriving from an all-too-familiar address. Gwen Proctor must keep friends close and enemies at bay to avoid being exposed—or watch her kids fall victim to a killer who takes pleasure in tormenting her. One thing is certain: she’s learned how to fight evil. And she’ll never stop.

Jean Brown Thomason
1,0 van 5 sterren Filthy language!!! Don't buy!!!
27 september 2018 - Gepubliceerd op Amazon.com
Indeling: Kindle-editieGeverifieerde aankoop
Filthy language!!! Don't buy!!! I bought it by accident...thinking that it was a good book. Find a good book to buy & read instead of this trash. If I had known that it had the foul, filthy, obscene, disgusting "f" word, I wouldn't have bought it. A waste of my money & time!!! I have already applied for a refund for accidentally buying this trash without searching it to see if it had the filthy, foul, obscene, disgusting "f" word. My fault for forgetting to check.
Meer lezen
354 mensen vonden dit nuttig
Vertaal recensie in het Nederlands

lovelylines
2,0 van 5 sterren Plot and characters come together like sour cream and jelly
11 juni 2017 - Gepubliceerd op Amazon.com
Indeling: Kindle-editieGeverifieerde aankoop
This book could have been clever, (where was the editor?) but fell far too short and landed in the realm of unbelieveable and not true to the characters created. Spoiler alert:

The premise is what pulled me in. A woman married to a serial killer....the aftermath of what that might look like for her? The book isn't poorly written, just poorly plotted, especially if one considers the supposed personalities and traits of the characters. 9 years of marriage and a wife never goes into the attached garage. Hmmmm, hard to buy. Then after being terrorized by online hate groups she blindly turns to one of those haters that says he has had a change of heart and he will help her? Then we are to believe her character has become a bit paranoid about safety and ultra prepared yet she continues to put her faith blindly in that same person? When it finally dawns on her that her serial killer ex husband knows her address and phone # she never once questions the hate fanatic turned helper as the source? It was all just highly unbelievable but could have been much more interesting with a rethinking of the plot.

For it to end on a cliffhanger....the ex escaping prison on the night her kids are abducted, well that turned this novel into amatuer story hour. It had the potential to be fantastic but the far reaching mistake of plot not being in sync with the development of the characters and the traits they were written to have possessed throws the reader out of the story so many times throughout the book.

Darcia Helle
3,0 van 5 sterren Riveting Story - Major Cliffhanger
5 juni 2017 - Gepubliceerd op Amazon.com
Indeling: Kindle-editieGeverifieerde aankoop
Rachel Caine is a gifted writer. Her storytelling evokes emotion, not just allowing me to feel the characters' emotions, but ensuring I have no choice. Her ability to weave suspense put me on edge, my muscles tense in anticipation.

I thoroughly enjoyed the originality of this story. We rarely see things from the perspective of the killer's family in the aftermath of his destruction. This is a fascinating look at human nature, both in the family's desperation to come to terms with the new reality of their lives and in the way society judges, condemns, and persecutes them.

So I should have loved this book. In fact I did, in many respects. But at the end I'm left grumbling with annoyance.

Before I get to what is, for me, the major flaw, there are two minor irritants to mention. First, the prologue is written in third person, from Gina's perspective, yet the rest of the book is written in first person. I can only assume the reasoning was to put distance between Gina before she knew about her husband, and Gina, who became Gwen, after the event. That's just my assumption, and the author could have had a completely different reason. I found it odd but not troubling. Some readers, however, might sample this book, find it's written in third person, buy it, and be irritated to find it's written in first person. I know some readers don't like first person storytelling.

Second, the entire plot relies on us believing that Gina never, not even once, stepped into her garage, which was her husband's workshop and, apparently, killing ground. I can't imagine a scenario in which I wouldn't, at some point, have the need to go ask my husband something or the desire to see what he was doing. There were also two young children who must have been well trained in leaving dad alone. This part was a bit of a leap for me, but not so much that I couldn't settle in and enjoy the story.

What killed this one for me was the ending. Or, I should say, the non-ending. This is not a stand-alone book. We're left with a major cliffhanger. The story is in no way self-contained, and to know what happens with Gina/Gwen and her kids you'll have to wait until the next book comes out. There is no mention of this being the first in a series, and so I have no idea when that next book will be released or even if the next book will resolve the cliffhanger.

I've noticed, much to my dismay, this trend of cliffhangers forcing us to read the next book, and then the next one after that. I don't know whether this is coming from the publishers or a segment of authors trying to push the purchase of followup books. Either way, I am not a fan. I love a series, but I also want the main plot to be resolved at the end. Cliffhangers feel too much like extortion - buy the next book or you'll never know what happens with these characters you're already invested in.
Meer lezen
1.193 mensen vonden dit nuttig
Vertaal recensie in het Nederlands

Bridgett
2,0 van 5 sterren This book is a cliffhanger...buyer beware.
8 juni 2017 - Gepubliceerd op Amazon.com
Indeling: Kindle-editieGeverifieerde aankoop
This book was odd. So many things about it simply didn't make sense or didn't follow any rational order. It felt like it needed more editing. Beyond that, though, it simply wasn't believable. None of the character's actions felt true to life. Are we really to believe that Gina never set foot in her husband's garage? Not once in all those years? Wouldn't most wives have an interest in what their husband's spent so much time doing?

Further, I simply don't believe that after 4 years, the FAMILY of a serial killer would be relevant in the least. People have super short attention spans and there are fresh horror stories every single day...it's not really plausible that this one particular family would have so many issues, particularly after years have passed.

Finally, this book is a cliffhanger! I thought it was a standalone, and to find that it's not is quite aggravating. Nevertheless, I don't see myself buying the sequel, when the first book in the series wasn't great.

I did like that the story was told by the family of the killer...that's fairly unique. With some tweaking, I feel this could be a great book. Unfortunately, it's not.
Meer lezen
164 mensen vonden dit nuttig
Vertaal recensie in het Nederlands

Avid Reader
1,0 van 5 sterren Don't Waste Your Time On This Book
7 augustus 2017 - Gepubliceerd op Amazon.com
Indeling: Kindle-editieGeverifieerde aankoop
Awful book. So glad that it was free. So much of the story did not add up at all. How could anyone live in a home and NEVER go into the garage? With everything that the husband had going on in the garage, there should have been some odors, blood, excessive noises, etc. Just totally unbelievable. And, in this day and age, how can anyone get children into schools without proper documentation and medical records? These inaccuracies really bothered me to the point that I spent more time wondering about them than the plot. This author is not for me. Disliked the book so much that I actually removed it from my Kindle.....and that is a first in a lot of years of Kindle reading.
Meer lezen
86 mensen vonden dit nuttig
Vertaal recensie in het Nederlands
Ga naar Amazon.com om alle 11.702 recensies te bekijken 4,5 van 5 sterren
Terug naar boven
Over ons
Verkoop bij ons
We helpen je graag
© 1996-2020, Amazon.com, Inc. en dochterondernemingen