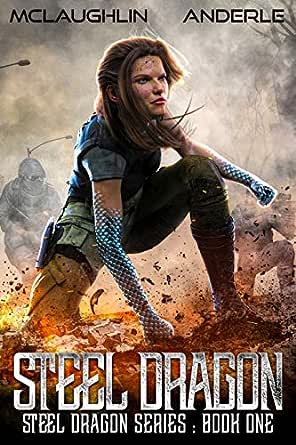 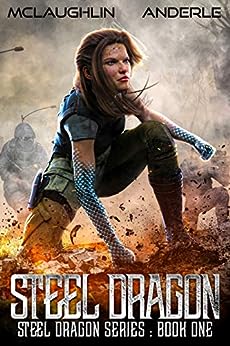 Dragons rule the world. Their claws are into every aspect of human life, from government to industry. But Kristen Hall is about to throw a wrench into all of that.

Because she’s a dragon, too. She just doesn’t know it…yet!

A dragon raised by humans, in the human world.

After graduating from the police academy, she’s dropped right into the ranks of Detroit’s elite SWAT team. A rookie, in SWAT? Unheard of. But what the dragons want, they get.

The reasons behind their machinations become clear as her dragon powers begin to surface.

Will Kristen rise to the challenges her new life delivers? What designs do the dragons have for her future? And perhaps most pressing of all — how did she come to be a dragon with human parents?

Scroll UP and click Read Now or Read for Free to learn the story of The Steel Dragon!

PLEASE NOTE: THIS IS A LARGE BOOK.

There are approximately 160,000 words in this Volume.

We will release this as three mini-volumes sometime in the future (as we have the opportunity.)

Dare
3,0 van 5 sterren Good beginning, poor middle, good end
29 oktober 2019 - Gepubliceerd op Amazon.com
Geverifieerde aankoop
So, this book was a decent read. The character is likable in the beginning and the end, it was fun to see her grow into herself, but in the middle she got arrogant, annoying, and I wanted to stop reading.i know, that was the authors point, but it was so bad, written so heavy handed, that I set it down for a day to get rid of the terrible, in your face, way the character was portrayed. Subtlety is not the writer’s strongest skill. Really, the way she acted she should have been suspended, reprimanded, and more. After a heart to heart with her father it became interesting again. If you can get through the middle it’s a decent book.
Meer lezen
32 mensen vonden dit nuttig
Vertaal recensie in het Nederlands

Rotten Roger
3,0 van 5 sterren Great begining for a teenage urban fantasy book.
6 november 2019 - Gepubliceerd op Amazon.com
Geverifieerde aankoop
But I am not a teenager. The supporting cast of characters are cliché. The secret villain has to villain. I am talking about the dance scene where the villain does evil just to let the reader know how evil it is. A few scenes near the end of book cause me to drop from a 4 to a 3 star. The world is interesting and I like it. It is a fun read. I will buy the next one.
Meer lezen
15 mensen vonden dit nuttig
Vertaal recensie in het Nederlands

BumbleBee
4,0 van 5 sterren Decent, with some fallicys
21 november 2019 - Gepubliceerd op Amazon.com
Geverifieerde aankoop
The books really a 3.5 star overall - great premise and such, and honestly fairly well written. It could have used an editor, but that wasn't the main failing of the book, even if it is a reason I dropped the rating. No - my personally main beef is this - this book was written with a large majority of the scenes involving guns. It's an action book, so that's understandable, and in fact to be expected. But many of the guns are refered to as "assault weapon" or "assault rifle/gun". Contrary to popular belief, the AR in AR-15 does not stand for assault rifle, and describing the guns as such tells little to nothing about the guns. AR-15 is a style of semi-automatic guns.
And finally, while there was some decent character development (especially for Wonderboy) many of the characters seem very flat, and could use a little more love from the author. (For example, I wasn't moved at a pivotal point in the story when a certain character died)
So, areas for improvement, but not at all bad.

Zeke Isaacson
5,0 van 5 sterren Wonderful story!
4 november 2019 - Gepubliceerd op Amazon.com
Geverifieerde aankoop
I truly enjoyed this book, and, although it was fairly long, it was all enjoyable!
I was starting to get a little annoyed when the protagonist became rather arrogant, but, being a Dragon, or at least becoming aware that you may be a dragon, can give you a bit of a reason to be arrogant, but I am thankful that she let her humanity rule her once again, and that allowed her to blossom into being that which she was destined to become; The Steel Dragon!
I must also point out that the editing in this book was very good, typos were almost non-existent. It did feel as though it was a trilogy, or at least a serialization, but I am happy it was all together between these digital sheets. ( I do wonder how many pages there are in it, and cannot locate any reference to it)

Kindle Customer
3,0 van 5 sterren This one kind of let me down.
10 november 2019 - Gepubliceerd op Amazon.com
Geverifieerde aankoop
The storyline plot was pretty good albeit fairly predictable, the aspect I didn't like too much was the added wresting with socio-political values which actually seemed prewritten and the story created around those prewritten limitations. If I substituted Politician for Dragon it wouldn't seem out of place in most of the book.
Meer lezen
9 mensen vonden dit nuttig
Vertaal recensie in het Nederlands
Ga naar Amazon.com om alle 122 recensies te bekijken 4,2 van 5 sterren
Terug naar boven
Over ons
Verkoop bij ons
We helpen je graag
© 1996-2020, Amazon.com, Inc. en dochterondernemingen