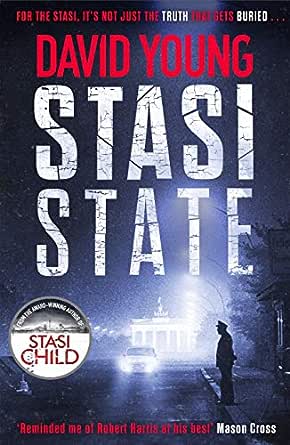 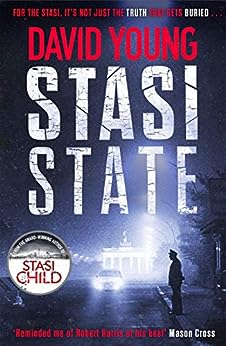 FOR THE STASI, IT'S NOT JUST THE TRUTH THAT GETS BURIED . . .

The body of a teenage boy is found weighted down in a lake. Karin Müller, newly appointed Major of the People's Police, is called to investigate. But her power will only stretch so far, when every move she makes is under the watchful eye of the Stasi.

Then, when the son of Müller's team member goes missing, it quickly becomes clear that there is a terrifying conspiracy at the heart of this case, one that could fast lead Müller and her young family into real danger.

Can she navigate this complex political web and find the missing boy, before it's too late?

Previously published as A Darker State

'Young is excellent at describing terrible injustice, mass and personal, by way of a strong plot and a sympathetic woman' The Times

'Superb. A thrilling Cold War mystery that reminded me of Robert Harris at his best' Mason Cross

L. Anderson
5,0 van 5 sterren In East Germany in 1976, the truth is not always what it seems to be
2 februari 2018 - Gepubliceerd op Amazon.com
Geverifieerde aankoop
"A Darker State" is both a thriller and a murder mystery that just happens to take place in East Germany in 1976. Oberleutnant Karin Müller of the East German Kriminalpolizei (Criminal Police) has been promoted to major in order to head up an investigative team with national authority, and is assigned to the case when the body of a teenage boy is found near the East German-Polish border. In the process of investigating, she runs up against the dreaded MfS, the Ministry for State Security, otherwise known as the Stasi, whose interest in the case is mysterious. She must tread carefully when the teenage son of a high-ranking Stasi officer is shown to be involved in unexpected ways, and when the involvement of the Stasi bleeds over into her personal life, it begins to affect her own friends and family, with potential repercussions that can only be described as dire.

The protagonist is interesting, because she is neither a party loyalist nor a dissident. The daughter of a German mother and a Soviet soldier father, who disappeared shortly after her birth, she is a product of the system and still believes in it, but she is not blind to the contradictions in the system, nor to the fact that she plays a part in some things she'd rather not think too hard about. As the series has progressed, she is starting to develop a more complete view of the world she finds herself in, and as the series progresses towards the inevitable end that the reader knows is coming with the fall of the Berlin Wall in 1989, of which she of course has no inkling, it will be fascinating to see how she adapts as the only world she has known starts to collapse. But that's for future volumes.

I'll add one other thing--36 years ago this summer, I visited East Berlin and East Germany. The writing in this series (it's the third book of a planned five) has captured the feel of that time in the East beautifully, both in atmosphere and in details. The author has clearly done his homework. I recommend this book wholeheartedly.
Meer lezen
Een iemand vond dit nuttig
Vertaal recensie in het Nederlands

Northern SW
5,0 van 5 sterren Legalized Male Homosexuality Was Not the Same As East German Acceptance
26 februari 2018 - Gepubliceerd op Amazon.com
Geverifieerde aankoop
In this newly published third entry in the Karin Muller series, from an upcoming total of five books, the mid-1970's East German police are focused on the suspicious deaths of several homosexual young men. The capable author does take some artistic license for this mystery, but it is largely based on the true misuse of young gay men under the East German Stasi, not to mention US companies' research trials allowed to run in cash-strapped East Germany, so the Iron Curtain country could earn more Western money. Karin Muller continues as the buffeted lead character, but the book can stand alone without having to be read third in line. This paperback was purchased online from Amazon, United Kingdom. It is good to read that the author has gotten a contract for 2 more books, as he writes knowledgeably about East Germany in the recent past, thus effectively increasing the reader's tension as the murder mystery thickens. Stayed awake all night reading this; already anticipating the next in the series. Not pornographic, this well-written thriller is recommended for high schoolers and adults.
Meer lezen
Een iemand vond dit nuttig
Vertaal recensie in het Nederlands

Terry Gyger
4,0 van 5 sterren Ongoing plot
17 januari 2019 - Gepubliceerd op Amazon.com
Geverifieerde aankoop
I liked the authentic setting - east Germany. I like the humanness of the main character. There is a lot sameness with the three books.
Meer lezen
Vertaal recensie in het Nederlands

Victoria Weisfeld
3,0 van 5 sterren It's hard to be a police detective when your bosses don't want you to find the truth.
4 april 2018 - Gepubliceerd op Amazon.com
Life in East Germany in the mid-1970s is the true subject of David Young’s intriguing series of police procedurals-cum-political-thrillers, and dark it is. Oberleutnant Karin Müller in East Berlin’s Kriminalpolizei—considered by some overpromoted to that post—has been inexplicably promoted again while on maternity leave. Now a major, she’s being put in charge of a team that will oversee investigations of high-profile murders anywhere in the country, murders that might “prove embarrassing to the Republic.” In other words, investigations that inevitably will put her on a collision course with the Ministry for State Security, the dreaded East German Secret Police. The Stasi.
Müller isn’t eager to cut short her maternity leave. But, as inducement, her boss reveals that a spacious apartment will be hers if she accepts the new job assignment—a giant step up from the tiny quarters where she’s living with her infant twins, their father, and her grandmother. And there’s the not inconsiderable inducement that she’d be working again with Werner Tilsner who also has been promoted. Müller accepts. Thank goodness. Now we can move on with the story and leave behind awkward references to the series’ earlier books.
Their first case arises when Tilsner is summoned to where a young man’s body has been found. The body has the marks of restraints and, it turns out, an abnormally high amount of testosterone in his blood. He’s only the first. The roadblocks that Müller and Tilsner encounter as their investigation proceeds have the machinations of the Stasi written all over them.
Meanwhile, Jonas Schmidt, the pedantic Kriminaltechniker who aids Müller and Tilsner with the forensic aspects of their investigations is in an increasingly sour mood. Trouble at home. Schmidt’s teenage son Markus has taken up with friends his parents deem unsuitable. Markus’s new friends are homosexual, and you suspect he’s being set up for something dangerous, even if he doesn’t see it. While East Germany legalized homosexuality in 1968, changing the law has not changed prejudices.
As in his first book, Stasi Child, Young tells part of the story from a victim’s first-person point of view, in this case Markus’s, starting a few months before Müller and Tilsner begin their new assignment. It’s a clever way to introduce backstory, since all crimes have some sort of history.
While the time shifts were mostly easy to follow, what would add to my understanding of the narrative would be a map showing the places the story takes place. Frequently, Müller is torn by late-night calls to go off somewhere, leaving the twins with her grandmother once again. I had no sense of whether these places are a few miles or a few hundred miles distant.
Meer lezen
Vertaal recensie in het Nederlands
Ga naar Amazon.com om alle 8 recensies te bekijken 4,3 van 5 sterren
Terug naar boven
Over ons
Verkoop bij ons
We helpen je graag
© 1996-2020, Amazon.com, Inc. en dochterondernemingen