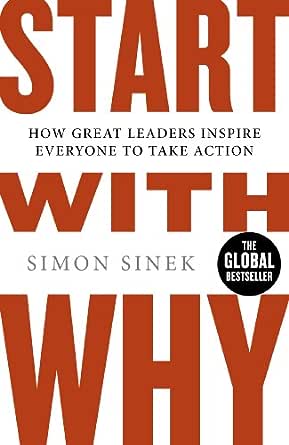 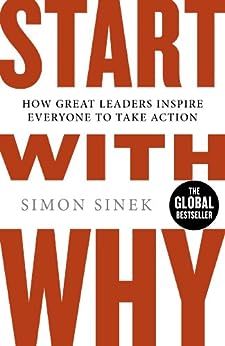 Start With Why: How Great Leaders Inspire Everyone To Take Action (English Edition) Kindle-editie

"Start with Why is one of the most useful and powerful books I have read in years. Simple and elegant, it shows us how leaders should lead."
-WILLIAM URY, coauthor of Getting to Yes "Start with Why fanned the flames inside me. This book can lead you to levels of excellence you never considered attainable."
-GENERAL CHUCK HORNER, air boss, Desert Storm "Each story will force you to see things from an entirely different perspective. A perspective that is nothing short of the truth."
-MOKHTAR LAMANI, former ambassador, special envoy to Iraq --Deze tekst verwijst naar de hardcover editie.

SIMON SINEK, the bestselling author of LEADERS EAT LAST and TOGETHER IS BETTER, is an optimist who believes in a brighter future for humanity. He teaches leaders and organizations how to inspire people and has presented his ideas around the world, from small startups to Fortune 50 corporations, from Hollywood to Congress to the Pentagon. His TED Talk based on START WITH WHY is the third most popular TED video of all time. Learn more about his work and how you can inspire those around you at StartWithWhy.com. --Deze tekst verwijst naar de hardcover editie.

Why are some people and organisations more inventive, pioneering and successful than others? And why are they able to repeat their success again and again?

In business, it doesn't matter what you do, it matters WHY you do it.

Start with Why analyses leaders like Martin Luther King Jr and Steve Jobs and discovers that they all think in the same way - they all started with why.

Simon Sinek explains the framework needed for businesses to move past knowing what they do to how they do it, and then to ask the more important question-WHY?

Why do we do what we do? Why do we exist? Learning to ask these questions can unlock the secret to inspirational business. Sinek explains what it truly takes to lead and inspire and how anyone can learn how to do it. --Deze tekst verwijst naar een alternatieve kindle_edition editie.

Kindle-klant
5,0 van 5 sterren Get's you back on the purpose why you become an entrepreneur!
17 mei 2020
Geverifieerde aankoop
A must read for all. Explains how to deal with assumptions and strong believes. Reset and figure out your purpose in time.
Meer lezen
Nuttig
Commentaar geven Misbruik melden
Vertaal recensie in het Nederlands

Haidji
5,0 van 5 sterren Inspirational book
3 november 2017
This book gives a very good explanation of what makes a leader and what you need to become one.
It is one of the best books on the subject of understanding why you do what you do to make a living whether you are a small business or a large corporation.
The ideas presented in this book are very interesting and well developed with insight as to what a great leader should be doing.
I'm a believer that we should all start with WHY.
Meer lezen
Nuttig
Commentaar geven Misbruik melden
Er zijn 2 klant beoordelingen en 3 klant beoordelingen.
Alle 2 klantenrecensies bekijken
Klantenrecensie schrijven

David Plotkin
2,0 van 5 sterren See the TED talk; save the money
23 maart 2017 - Gepubliceerd op Amazon.com
Geverifieerde aankoop
The author's TED talk is one of the most-viewed ever; and it's really quite good. In fact, it's so good that you don't need to read this book! He takes a very, very simple concept and expands, and expands, and repeats, and seemingly never edits, and then repeats, and expands, and -- well, you get the idea. The whole thing could've been done in 50 pages or less.
Example: Yes, there's a difference between WHAT one does in business and WHY one does it. And sometimes they diverge. He calls this the "Split" and has a graphic and whole chapter on it. Really?? Not needed.
Example: He mines the stories of Apple, Wal-Mart, Costco, Starbucks, Martin Luther King Jr, and a few others - over & over & over & over & over again. He makes elementary and generalized statements, such as saying that NONE of the 250,000 people who came to hear Dr. King in Washington came for him; no sir, they came for themselves because their "why" connected with his "why." Uh, no; many came for him and his message or to simply support civil rights.
Example: He constantly repeats the words WHY and WHAT in CAPS ALL THE TIME so you'd get the message. And then again....and again.....
Example: Yes, the Apple Computer story is inspiring. But among all that WHY stuff is also the story of a dreamer with incredibly bad people skills. To simply elevate the Apple story - and retell it umpteen times - is to vastly oversimplify what made them great back then and now, and why they succeeded in spite of the way Jobs treated his employees.
It's almost as if the author had about 10 stories in his pocket and decided to use nothing else at all. He created the entire "start with WHY" mantra out of the 10 stories and never went beyond them to augment, embellish, or create more learnings.
So save the money, see the TED talk, and take what he says there to heart. WHY is the basis for being motivated. But there's a whole lot more to say, and sadly, he never gets to it.
Meer lezen
285 mensen vonden dit nuttig
Vertaal recensie in het Nederlands

Pen Name
2,0 van 5 sterren Most repetitive book I've ever read
8 februari 2018 - Gepubliceerd op Amazon.com
Geverifieerde aankoop
I read this book 10 times. No, I didn't read it over and over. I just read it once and by doing that I read it 10 times. It's so repetitive that I actually stopped multiple times to check where I am in the book, thinking that I mistakenly flipped back to a previous chapter. I started to wonder if the author has amnesia and forgot that he explained why Apple is innovative for the 100th time. I gave it two stars because the underlying concept is a good one but you can save your time and just watch the TED talk.
Meer lezen
142 mensen vonden dit nuttig
Vertaal recensie in het Nederlands

Dimitrios St
1,0 van 5 sterren Just watch the TED Talk!!
27 januari 2017 - Gepubliceerd op Amazon.com
Geverifieerde aankoop
As pointed out already, the message is indeed excellent and it got me interested when I first watched the TED talk.. I bought the book waiting for the author to have elaborated more on this interesting idea, with more examples and comprehensive discussion. However, the book is insanely redundant with the same 2-3 examples repeated over and over and over and over again.. The author was trying so hard to make a many-page book out of the message and it was excruciating to go through this repetition..

Save your money and (most importantly) your time and just watch the TED talk on YT..
Meer lezen
885 mensen vonden dit nuttig
Vertaal recensie in het Nederlands

Ameripen
1,0 van 5 sterren Not worth one's time
22 januari 2017 - Gepubliceerd op Amazon.com
Geverifieerde aankoop
I read a lot. At least a few hours a day. This book was awful.

Let's start with why. Sinek is an awfully repetitive and, frankly, unskilled writer. He lays out his thesis and then repeats it like a rower repeats his stroke. As he drags out the book to whatever number of words he needed to fulfill book contract, he re/illustrates his thesis with different examples. This would have made the book slightly more tolerable, except the examples are so ordinary and well known that they will put you to sleep. Apple, Disney, JFK, Hitler. Yawn. Even that might be fine if he had spent five minutes on Wikipedia to research less-known stories about them, but it doesn't look like he did.

This book should have been a column in a weekend newspaper, or, at best, a chapter in another book about leadership. Not worth your time.
Meer lezen
214 mensen vonden dit nuttig
Vertaal recensie in het Nederlands

WK
2,0 van 5 sterren Interesting idea, but terrible book. Read an abstract or get the Ted talk.
19 maart 2018 - Gepubliceerd op Amazon.com
Geverifieerde aankoop
How do you rate this book? The basic idea is good, the book itself is a slog. As others have noted, watch the Ted talk, or read a summary from an abstract service.

The premise is interesting, but it's not ground breaking. Basically, it's: don't start with what you can do and figure out how to find a market, but instead start with a passion, a need, and what gets you up in the morning, build a business around that, and hire people who share your passion. It's slightly more than that, but not much more, hence find the Ted talk or read an abstract.
Meer lezen
60 mensen vonden dit nuttig
Vertaal recensie in het Nederlands
Ga naar Amazon.com om alle 2.600 recensies te bekijken 4,5 van 5 sterren
Ontdek het beste van shopping en entertainment
Gratis en snelle bezorging van miljoenen producten, onbeperkt streamen van exclusieve series, films en meer
> Ontdek Prime
Terug naar boven
Over ons
Verkoop bij ons
Amazon-betaalmethoden
We helpen je graag
© 1996-2020, Amazon.com, Inc. en dochterondernemingen