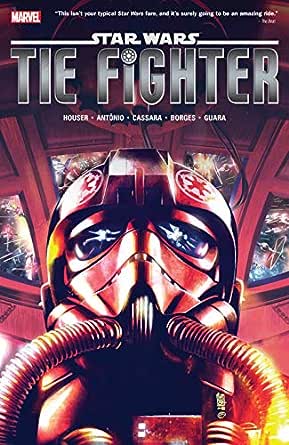 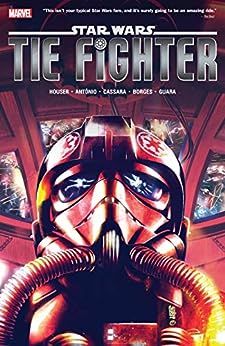 Enter Shadow Wing - the Empire's salvation, and the Rebellion's doom! As the war between the rebels and the Galactic Empire stretches on, it's the innocent people of the galaxy who are most at risk. An elite squadron of TIE fighter pilots is assembled to help protect Imperial interests - and hammer the Emperor's fury down upon the treasonous and violent Rebel Alliance. But how far is this untested team willing to go to preserve law and order? Are the pilots of Shadow Wing as loyal to the Empire as they seem? And on a dangerous mission to deal a devastating blow to the Rebellion, will any of them survive the fight?
click to open popover

PWDecker
4,0 van 5 sterren A true tie-in comic
19 oktober 2019 - Gepubliceerd op Amazon.com
Geverifieerde aankoop
This Star Wars comic follows the Shadow Wing Squadron of the Empire from the Battle of Hoth to the destruction of the second Death Star. This is part of a cross-media tie-in with Alpha Squadron. This book is full of references to other stories and characters, almost to its own detriment.

There are a lot of interesting characters and a decent enough story, but there isn't enough focus. Too many peaks at other characters that aren't relevant to this story are given too much spotlight. There's even an asterick referencing the Solo tie-in comic Imperial Cadet. I wasn't sure which characters were new to this story and which ones were just references.

I did enjoy the pacing, though. We really got to see the Shadow Squadron experience some stuff. It's an unusual style having every issue end with a flashback though. I'd love to see these characters reappear. What do they do after the Emperor is gone?

I give this book a 3.5/5. It's not enough of a story on its own. It relies too much on references and doesn't do enough on its own.

Andrew the H
5,0 van 5 sterren Amazing!
18 oktober 2019 - Gepubliceerd op Amazon.com
Geverifieerde aankoop
I love anything that gives the Imperial point of view. This did not disappoint! I would buy more if these Imperial collections, period.
Meer lezen
3 mensen vonden dit nuttig
Vertaal recensie in het Nederlands

ID-27529
3,0 van 5 sterren Better than it's counterpart, Alphabet Squadron
20 december 2019 - Gepubliceerd op Amazon.com
Geverifieerde aankoop
This book sort of coincides with the novel Alphabet Squadron. It's a fun 5 part comic that gives a glimpse into TIE pilot life and the 204th... one of the elite squadrons.
However, I feel like it abruptly ended and was found to overall not be satisfied. (-1 star)
I love seeing things from the Imperial side, so this does begin to satisfy that... but since it's in comic form, you don't get in depth... it's just superficial. And that's OK, but why I'm only giving it a 3 and not a 4.
Meer lezen
Vertaal recensie in het Nederlands

Jrmy
5,0 van 5 sterren Solid tie-in with interesting storytelling choice
15 januari 2020 - Gepubliceerd op Amazon.com
Geverifieerde aankoop
I wasn't expecting much from Tie Fighter (given that it's a tie-in miniseries to the novel Alphabet Squadron), but the story was solid and the art was great. I also liked the decision to have short, character-based backups in each issue. You rarely (if ever) see that in Star Wars comics. The choice works here, giving you reasons to care about the characters and making this miniseries feel much "bigger" than it is--which is good because the main story is conventional and low-stakes independent of the tie-in novel.