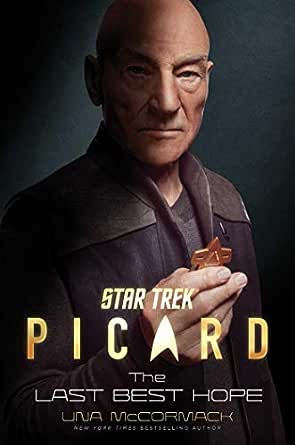 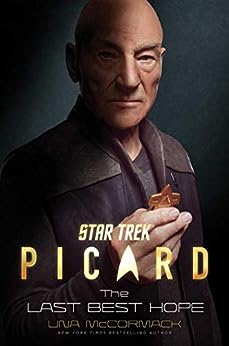 An original novel based on the new Star Trek TV series!

A thrilling novel leading into the new CBS series, Una McCormack’s The Last Best Hope introduces you to brand new characters featured in the life of beloved Star Trek captain Jean-Luc Picard—widely considered to be one of the most popular and recognizable characters in all of science fiction.

An original novel based on the new Star Trek TV series! A thrilling novel leading into the new CBS series, Una McCormack's The Last Best Hope introduces you to brand new characters featured in the life of beloved Star Trek captain Jean-Luc Picard--widely considered to be one of the most popular and recognizable characters in all of science fiction.
Alle bekijken
click to open popover

The language was uncharacteristic and COMPLETELY UNNECESSARY to the story. I'm truly sorry. There were too many 17 S--Ts and 19 F---Ks for my taste.

It reminded me of a Wiseguy story. I hate saying this honestly. I hated it in 1990 when someone actually counted the swear words in Goodfellas. That was stupid. It is a crime and mafia movie. What did anyone expect?

I'm sorry I'm not trying to a Gooder or a Snob. But Trek is Trek.

But regardless, Ianguage aside. I hope its a success, and never want anyone to fail at all.

It completely pulled me out of the story, instead of engrossing me into the story after all. I wanted to know more of Picard series story.

I'm still a Trek fan, but this is beyond weird as far as language and prose go.

Now excuse me as I go all hardcore before going to the Laundrette as Simon Pegg said in the movie "The Fantastic Fear of Everything" :)

I dont want to see a picture of SIR PATRICK STEWART a knight of the British order next to a PMRC parents advisory sticker at all.

Star Trek has always been inclusive and should stay that way regardless.

Honestly, I hope you enjoy it more than I tried to, the language and the prose pulled me out of the story. But what I did read, I did like hence the 5 stars.
Meer lezen
23 mensen vonden dit nuttig
Vertaal recensie in het Nederlands

Christopher D. Abbott
5,0 van 5 sterren Engaging, well thought out, and brilliantly written...
13 februari 2020 - Gepubliceerd op Amazon.com
Geverifieerde aankoop
Just finished this book. It was exceptionally well written. Fast paced. Gave excellent background to the show, and some tidbits of good info on the TNG crew. Obviously, we all knew where it was going to end up. But the journey it took was very interesting.

Una McCormack is a veteran of Star Trek, now writing for a new age version, which she does so brilliantly.

We get a lot more about the political wrangling of the Federation Council vs Starfleet vs a distrustful enemy that can’t ask for aid, nor wishes to acknowledge the scale of the problem, and considers the ramifications of Federation assistance, which seems a much bigger issue to them than billions of their citizens dying in the supernova they seem almost to reject. I liked the frustration this caused on both sides.

We see various groups of people across the Federation—most of that action on Earth and Mars—trying to solve the unsolvable.

We are given a clearer view of the late 24th Century, where the ideals of what we know about Star Trek are tested to the limits, because of this calamitous situation. And the fact it threatens to consume the entire Federation, is again something that felt much better explained than in the show. Old school players like Picard, defending the values of the Federation, while newer younger members who can’t understand why their work should be put on indefinite hold, for Romulans. Since most were too young to have served during the Dominion War, and have only been on either Mars or Earth, they are disconnected with the founding principles of the Federation. It’s all so far away... Romulans should be in Romulan Space. Etc.

The scale of what is needed, in terms of ships, resources, locations for relocation, are explored. I found myself surprised by the level of aid required. The feasibility of the project is questioned at every level. The Romulan distrust of the Federation, properly explored. The resolute position of Admiral Picard, doing what was right, politics be dammed and his stubborn “will do” attitude, which has always been the brilliance of his command style, fails to get him the results he is so used to.

A CinC who believes in the mission, but has to smooth over the political ramifications of Picard’s choices... and a senior Captain, Clancy (we all know her!) who is cautiously on board, but continually frustrated by Picard, because of his dismissal of the politics and the enormous strain the mission is putting on the Federation. With resources spread thin and outlying planets left in terrible despair by the loss of their support, secession starts being pushed around the Federation News Network (FNN). Picard continually misses the enormity of the political situation. It isn't his problem. His eyes on solving the insurmountable task of moving billions of people, against a backdrop of Romulan suspicion, and a Federation Council swaying to loud voices in the media.

There is xenophobia and veiled racism within the Federation. But that’s not new. TNG and Voyager dealt with that to some degree, but never more so than DS9...

Some wins. Mostly failures. And of course the results we know.

I really enjoyed this book. If you want to have the backstory for Picard, without spoiling the show, this is it.

Kindle Customer
3,0 van 5 sterren Good but misses
14 februari 2020 - Gepubliceerd op Amazon.com
Geverifieerde aankoop
I was very excited at the start of this book. I loved the drive of Picard and felt it rang true to the character. I struggle however, with the rest of the characters. part of star trek is seeing ourselves overcome our pettiness and work to a greater good but unfortunately the characters and politicians read to close to present day which I feel is a miss. The end of the story feels rushed and some of that may be because the show is at the halfway point at the writing of this review.
On a side note, the cursing has increased quite a bit and feels a bit out of place in the Star Trek universe. I'm not a prude but it feels like the author was a little overzealous and it felt unnecessary.
Meer lezen
6 mensen vonden dit nuttig
Vertaal recensie in het Nederlands

Ok
4,0 van 5 sterren A must-read for fans of the show.
14 februari 2020 - Gepubliceerd op Amazon.com
Geverifieerde aankoop
A must-read for those that enjoy the new show. Also discusses some items that continues the proper prime timeline.

The book should be read before watching episode 4 of Picard. It explains it.

However, the thing that really stands out is how Picard speaks in the book. The language is not in his character. There is also modern US politics at play in the book’s situations.

One thing I did notice is that there may be a major hint pertaining to the overall storyline. I won’t give it away but it’s from Dr. Amal Safadi.
Meer lezen
5 mensen vonden dit nuttig
Vertaal recensie in het Nederlands
Ga naar Amazon.com om alle 12 recensies te bekijken 4,5 van 5 sterren
Terug naar boven
Over ons
Verkoop bij ons
We helpen je graag
© 1996-2020, Amazon.com, Inc. en dochterondernemingen