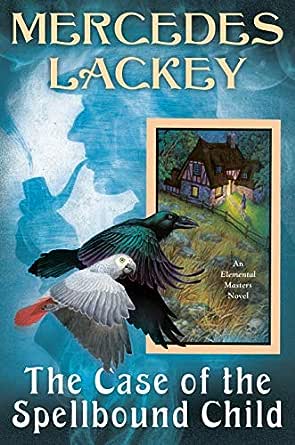 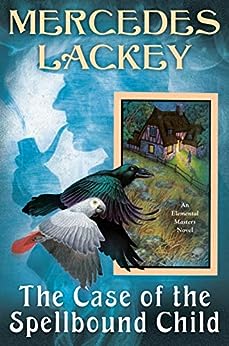 While Sherlock is still officially dead, John and Mary Watson and Nan Killian and Sarah Lyon-White are taking up some of his case-load--and some for Lord Alderscroft, the Wizard of London.

Lord Alderscroft asks them to go to Dartmoor to track down a rumor of evil magic brewing there. Not more than four hours later, a poor cottager, also from Dartmoor, arrives seeking their help. His wife, in a fit of rage over the children spilling and spoiling their only food for dinner that night, sent them out on the moors to forage for something to eat. This is not the first time she has done this, and the children are moor-wise and unlikely to get into difficulties. But this time they did not come back, and in fact, their tracks abruptly stopped "as if them Pharisees took'd 'em." The man begs them to come help.

They would have said no, but there's the assignment for Alderscroft. Why not kill two birds with one stone?

But the deadly bogs are not the only mires on Dartmoor.
click to open popover

Kindle Customer
4,0 van 5 sterren So good, but...
3 december 2019 - Gepubliceerd op Amazon.com
Geverifieerde aankoop
(Minor spoiler) The very beginning has the characters act harshly and negatively towards a girl younger than 18 they discover was deceived by an older man into loving him, then spurned when he finds she will not have the money - tricked into taking a potion to induce miscarriage (and likely to be blackmailed should she recover) and taken to a mental asylum for breakdown. Our heroes? View her as a spoiled over dramatic stupid girl who should have kept her legs closed. They call her a child, the admit she was deceived, and still speak as if it is all her fault. They tell no one who might be able to at least talk to her and leave her where she is to continue to wallow in her hysterics. The only point of the scene is to show how bored the protagonists are because the case isn't at all magical or psychic, and it is not referenced again, not as a plot connection or the heroes learning a lesson of their own or anything at all. I can't even say oh, standards of the time being written, when the protagonists break all the conventions of the time and are annoyed by being seen as lesser for being women.

It is horribly jarring when we see how valiant, kind, etc they are in the rest of the book to those in need. And that is a shame because the rest of the book is good reading. I expect better from Misty.
Meer lezen
14 mensen vonden dit nuttig
Vertaal recensie in het Nederlands

The latest Elemental book is just the latest example of what I've felt for quite some time- these books are getting so LAZY. It tells a story long enough to pander to the audience to bring tiny updates about beloved characters (without bothering with any further character development) and quickly ties up a battle in a few pages or less, ending with the most ridiculous and pointless inclusions of a "trial".

When was the last time we saw Elementals really engage with the main characters? Nan and Sarah barely did more than eat and think really hard in this last book.

This series used to be so rich in details about Elementals and character experiences. But this has felt like mass produced fanfiction for awhile. I don't know if I will continue with this series.
Meer lezen
5 mensen vonden dit nuttig
Vertaal recensie in het Nederlands

Paul A. Danaher
3,0 van 5 sterren Oddly judgmental
4 december 2019 - Gepubliceerd op Amazon.com
Geverifieerde aankoop
The opening story as a way of introducing collaboration with Suki on the “spiritual” plane is oddly harsh – a foolish teenager (encouraged by a mercenary maid?) ruins her life and is left to rot by the Watsons etc
As a classic nitpick, there’s no way on earth that you could commute from Plymouth to London in an hour, then or now …
Meer lezen
5 mensen vonden dit nuttig
Vertaal recensie in het Nederlands

A Reader
3,0 van 5 sterren Not up to snuff
6 december 2019 - Gepubliceerd op Amazon.com
Geverifieerde aankoop
I have (I believe) read all the books in this Elemental Masters series. This one was a disappointment. It seems to be patched together from scraps or ideas for three different books. The writing itself struck me as the product of a bored author out to complete contractual obligations. All the usual characters show up, except for Alderscroft who remains in the background as a bottomless financial support. Little character development or advancement of the overall plot of the series. Sherlock remains in hiding. The little touches of Victorian life spark some interest, such as the chamberpot with bleach water, provided by the better hotels. Can I call this Steam punk fantasy?
Meer lezen
2 mensen vonden dit nuttig
Vertaal recensie in het Nederlands

Tracy Brown
5,0 van 5 sterren So that’s what a grimoire is!
31 december 2019 - Gepubliceerd op Amazon.com
Geverifieerde aankoop
I can’t get over how much I love Nan and Sarah! They are smart and kind and witty and brave. Perfectly suited to being friends with Dr. Watson and his lovely wife Mary, not to mention Sherlock Holmes!

What kind of person feeds off of other people? Particularly off of children? Sadly, though this book focuses on magic, the reality is that a there are many in this world that could and would do the same to helpless children. To have a happy ending, to see a righteous few win the battle, brings me satisfaction.

Best of all, this book provided the chance to catch up with some others who are now friends, Peter and Suki. I hope in the future we get to encounter Helen and Simon again and see how they develop. This book was nice way to end 2019!
Meer lezen
Vertaal recensie in het Nederlands
Ga naar Amazon.com om alle 30 recensies te bekijken 4,1 van 5 sterren
Terug naar boven
Over ons
Verkoop bij ons
We helpen je graag
© 1996-2020, Amazon.com, Inc. en dochterondernemingen