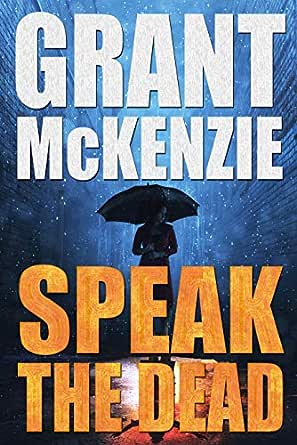 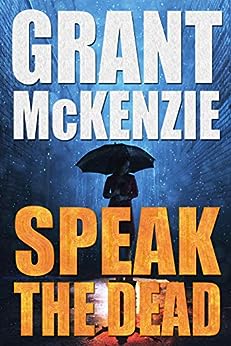 When Sally Blue was six years old, sleeping peacefully in her bed, a gunshot woke her up and subsequently ripped her world apart.

Jolted awake by the scary noise, Sally ran to her parent’s bedroom for comfort. Instead, she found her mother slumped against the headboard, her ravaged nightdress drenched from a double-barreled wound.

Climbing on the bed, Sally cradled her mother’s head against her tiny chest, mindless of the blood and the cloying stench of death. There was no sign of her father, and Sally was too frightened to call out, when a voice from deep within her dead mother’s throat screamed: “Run, Sally! Run!”

Twenty-five years later, Sally has finally stopped running. She finds peace among the dead as a mortician’s beautician, and on the night of a strange murder that reawakens a special gift within her, she actually meets an interesting man: Jersey Castle, homicide detective by day, punk rock drummer by night.

But what Sally doesn’t know is that someone has been hunting for her all this time, and now that she’s passed his test of blood, he will stop at nothing to bring her home again.
Alle bekijken
click to open popover

wendyk55
5,0 van 5 sterren page turner...FROM BEGINNING...
20 april 2018 - Gepubliceerd op Amazon.com
Geverifieerde aankoop
COULD NOT READ ANY OF THESE FAST ENOUGH...I literally read it everywhere. Characters were great and I liked a book that I could literally not put down, reading while floors dried, reading in line at grocery store, reading at train crossing, etc.

WORTH THE PRICE, WORTH THE TIME.

Kindle Customer
5,0 van 5 sterren Great Story
31 januari 2019 - Gepubliceerd op Amazon.com
Geverifieerde aankoop
Mr. McKenzie has moved to my list of great writers. His stories are so original and his characters are exceptional. I mostly appreciate that they have men who will do whatever it takes to "right a wrong", but they also have very tough women helping them. Love, love, love his books.
Meer lezen
11 mensen vonden dit nuttig
Vertaal recensie in het Nederlands

When Jersey, a detective on the Portland police department, who also is a drummer in a heavy metal band, first encounters Sally at a crime scene he feels an immediate attraction to her and she to him. As time flies by he is drawn closer to her flame. After she is abducted his drive to find her borders on obsessive.

After his investigation stalls in Portland other clues lead him up the coast to Seattle. In Seattle he is joined by Kameelah, a friend of his partner in the Portland police department. Kameelah joins Jersey to search in Seattle for the nun Sally's message led them to believe was named Sister Fleur. An interesting twist occurs midway in the investigation their search for Sally. They encounter an unusual order of nuns that have information of Starvation Blue aka Sally. The information and assistance is instrumental later during his rescue of Sally.

college + level reader
3,0 van 5 sterren Umm about the language....
18 augustus 2019 - Gepubliceerd op Amazon.com
Geverifieerde aankoop
Overall, I liked the story. BUT, and this is a biggie, IF you are going to write fiction set in the US, please make sure to use AMERICAN ENGLISH & situations. Most Americans don't celebrate 'the Queen's' b-day, because the US doesn't HAVE a Queen & we are not part of England or any other country which does. Furthermore, most Americans call their dressing gowns robes or bath robes. Likewise, a lift is an elevator. A non-english police supervisor who responded to a detective by saying "quite" had better be English, otherwise he's making fun of the English. "Buggered" is not how a detective would refer to a ruined lock. I could go on. And on. And, yes, on. Instead, I took off 2 stars. Yeah, it's that important. For future novels, consider hiring a proof reader with substantial experience communicating in AMERICAN ENGLISH. Good story, otherwise. I don't even mind that it's somewhat unrealistic. After all, it's fiction!
Meer lezen
Vertaal recensie in het Nederlands
Ga naar Amazon.com om alle 57 recensies te bekijken 4,5 van 5 sterren
Terug naar boven
Over ons
Verkoop bij ons
We helpen je graag
© 1996-2020, Amazon.com, Inc. en dochterondernemingen