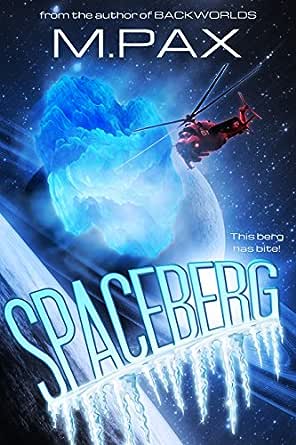 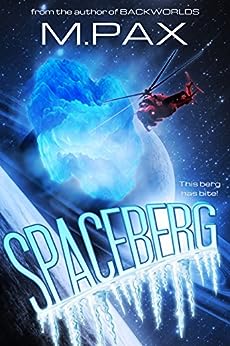 This berg has balls and they bite.

Spaceberg arrives without warning. The size of Jupiter, it hits with deadly consequences, taking out ships and colonies in the outer solar system.

Orbital Rescue Squad 51 is first on the scene with the most decorated first responder in the Sol. Nikili Echols battles the mega disaster to save her family, everyone in trouble, and entire worlds. With time running short, she’s forced to team up with her ex-husband in order to rescue their daughter and to save what remains of the solar system. His superstitions irk her like gas, but luck and organic plastic is what her plan needs to prevail.
click to open popover

Nikili had a bad experience a while back that resulted in the loss of an entire family, and it shook her to her core. In the aftermath she distanced herself from her husband and daughter. When answering a distress call for a private cargo ship that's been damaged, the only hauler that can bring the ship in, along with it's Captain, is Hook, Nikili's ex-husband.

Hook tells her that their daughter is going off to school on Saturn's moon Rhea, and that she should visit when they drop the injured Captain. Nikili runs off to to see her daughter, but is met by Chiqita, Hook's new wife-to-be. The ship leaves before Nikili can see her, and Chiqita, who runs the docking area, tells her she sent the ship early because she's damaged, and doesn't think her daughter needs the hassle.

It turns out that the object that collided with the cargo ship was a small piece of a giant iceberg that is hurtling through the outer solar system and on a direct path towards Rhea. Nikil, working with Chiqita, her partner Lucy, and Hook, all set off to save their daughter, the solar system, and put their family back together again.

M. Pax has done it again with a really fun, quick read, and it doesn't try to take itself too seriously.

B. Allen Thobois
5,0 van 5 sterren If you like your SciFi laced with tongue-in –cheek humor, this is the book for you.
17 juni 2018 - Gepubliceerd op Amazon.com
Geverifieerde aankoop
Pax brings another interesting story to the table, this time from the perspective of a rescue ship saving lives in the vastness of our own solar system. Well written, fast paced, I enjoyed every word of this book, finding myself captured by the writers’ style and use of “Easter Eggs” to provide additional humor in this charming take on the rescue/ambulance services in space.
Meer lezen
Vertaal recensie in het Nederlands

Christine Rains
5,0 van 5 sterren Sci-fi with bite!
28 mei 2018 - Gepubliceerd op Amazon.com
Nikili Echols and her partner Lucy are the most decorated first responders in the Orbital Rescue Squad. They get a standard call that turns out to be not so ordinary. Death is headed into the solar system, and they have to stop it with the help of Nikili's ex and his new girlfriend. It's hard enough wrangling all these messed up relationships, never mind that massive berg rocketing into moons and planets. Will they save millions of lives or end up getting chomped themselves?

A fantastic sci-fi novella that had me laughing out loud at times and on the edge of my seat at others. There's plenty of action and a nice dose of quirkiness, but what really nabbed me was the well-drawn characters and their tangled relationships. Very well done.
Meer lezen
Vertaal recensie in het Nederlands

Daniel Rodriguez
4,0 van 5 sterren I enjoyed the characters and look forward to seeing more of ...
15 mei 2018 - Gepubliceerd op Amazon.com
I enjoyed the characters and look forward to seeing more of them. The story was entertaining and laid out enough of the world for you to want to see more. The story does bog down at the end with an excess of emotional dialog. The relationships had been well established in the earlier parts of the book, the constant referring to everyone's emotional state as well as the unlikely premise that everyone is working on a catastrophe while working out relationship issues was a major distraction. 4 stars for the characters and the world building, the end drops it down to a 3.
Meer lezen
Vertaal recensie in het Nederlands
Ga naar Amazon.com om alle 9 recensies te bekijken 4,5 van 5 sterren
Terug naar boven
Over ons
Verkoop bij ons
We helpen je graag
© 1996-2020, Amazon.com, Inc. en dochterondernemingen