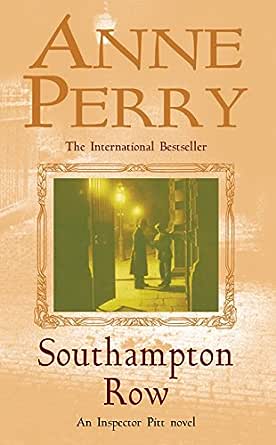 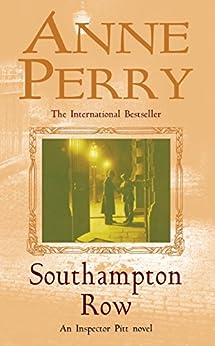 "Compelling . . . vintage Perry: a grand, sweeping mystery."--Pittsburgh Tribune-Review "Fast moving and utterly engrossing . . . Perry's Victorian novels attain the societal sweep of Trollope or Thackeray; she has absolute command over both political history and the small fascinating details of everyday life."--Booklist (starred review) "A mystery--a very good one . . . Status, rights, love, and duty are hallmarks of Perry's narratives. Here, they are brought into finer focus, allowing their inherent drama to carry the story forward."--Minneapolis Star Tribune "Perry skillfully explores the gap between the Victorians' love of knowledge and their deepening suspicion that their way of life cannot continue."--The Boston Globe "Delicious political treachery . . . [Perry's] grasp of the economic and social forces of the period is masterly."--Chicago Sun-Times

An enemy more deadly than any Pitt has faced before...

Murder, spiritualism and corruption are all at play in Anne Perry's gripping novel, Southampton Row, the twenty-second mystery in the Thomas Pitt mystery series. Perfect for fans of C. J. Sansom and Sherlock Holmes.

Despite Thomas Pitt's success in the Whitechapel case, the secretive Inner Circle prevents his returning to the Bow Street police as Superintendent. Pitt's next task for Special Branch is to investigate Charles Voisy - the corrupt Inner Circle man Pitt defeated in court - who is standing for election as a Tory MP. Pitt must obtain information to stop Voisy's climb to political power. Then Pitt is ordered to Southampton Row, scene of the hideous murder of a spiritual medium. As the link between the spiritualist and political figures is revealed, the whispers of scandal grow louder. And with Charlotte in hiding for safety, Pitt must turn to his sister-in-law, Emily, to help him solve one of his most high-profile cases yet...

What readers are saying about Anne Perry:

Georgianna M. Bergeron
5,0 van 5 sterren All Her Stories Are Good
10 september 2016 - Gepubliceerd op Amazon.com
Geverifieerde aankoop
Anne Perry is an excellent writer. The reader is taken right into 19th century London. We see, hear, smell, taste and feel what the characters experience. These mysteries usually involve a murder or murders, but the reader happens upon the scene after the violence is over. Grisly, but not overtly violent. The same with cases of rape. These are discussed but we are not subjected to the scene itself. In the case where the main characters are married, we see them hugging, kissing but no overt sex. Victorian in feel but open-minded. The writer brings philosophy and guides to appropriate behavior into her stories, sometimes as a mother answers her children's questions. We get a feel for the difference in expectations of the upper and lower classes, and especially the limitations women experienced in that time and place. I have 30 of the Charlotte and Thomas Pitt novels and will probably continue to acquire them.
Meer lezen
Vertaal recensie in het Nederlands

carol storm
5,0 van 5 sterren Another fine outing with Charlotte and Thomes's band of friends.
27 september 2013 - Gepubliceerd op Amazon.com
Geverifieerde aankoop
Although this was not the last book in this series, it is in fact for me. I've read everyone and had to go back to this one that somehow I missed. Perhaps I can start to get my house ready for the winter to come. I have been held captive for the past couple weeks finishing the last 6 books in this series. I can't tell you how desolate I feel. I do hope that Ms. Perry is busy writing her little fingers to the bone. Southampton Row was as delectable as all of the rest of the books in the series and I am feeling quite empty knowing I will not be visiting with my friends for some time to come. That is what I have felt throughout the reading of all of these books. I started with the first book about 2 years ago and then got involved with another genre. I picked up my old friends a few months ago and have been busy finishing off the second half of their adventures. What I loved most about reuniting with them was the cozy feeling of catching up with family and friends that I've been away from for several years. What joy it was to find all of the changes in their lives. I never was particularly concerned with the actual mystery they were solving, even though they still had the ability to make my heart beat fast and wonder how my friends would get out of this fix they found themselves in. I had much more fun getting comfortable with the mores of the late 1800's London again and finding Pitt finally getting some respect that he always deserved. I loved following he and Charlotte's lives as they began their family and watching their children grow. I was happy that Emily married Jack and was left well endowed by her first husband because I would comfort myself that they could save Charlotte and Pitt from total poverty since they have been dancing on the brink of it all along. My love for Aunt Vespasian has grown to the point I am quite nervous of her advancing age. The thought of her leaving is almost more than I can bear. She is the fairy god-mother that I've always wanted. I love how Ms. Perry paints so clearly the loyalty of their new friends. The hard won acceptance which always means so much more to us. The indomitable little Gracie who's love and respect is hard won but once given has the strength of steel. That fits the profile of her husband as well, the no nonsense Tellman who will never be comfortable with the caste system that was England for as long as he knew. I loved the fact that the brooding and hard to read Narraway fell so deeply in love with our Charlotte and the story could be told with such feeling even while our friends maintained their dignity and honor. Oh, how differently that would be written today! I hope that our dear author will continue to provide us with the ability to step back into a time when we knew the value of honor and recognized that sometimes the best things we did we're those that denied us what we wanted but maintained our dignity. I hope everyone will get the opportunity to read this series from beginning to end. It is a pastime most worthy.
Meer lezen
2 mensen vonden dit nuttig
Vertaal recensie in het Nederlands

Fred Camfield
4,0 van 5 sterren Political Intrigue and Murder
21 januari 2003 - Gepubliceerd op Amazon.com
Geverifieerde aankoop
This is a sequel to the previous novel, "The Whitechapel Conspiracy," which should be read first to fully understand the characters and background. The book possibly gets a little heavy into the position of women in society, etc., but otherwise is a good mystery. Charles Voisey was thwarted in his attempt to seize the government, but now is knighted and seeking a seat in the House of Commons. Thomas Pitt has been sent back to Special Branch, and the Inner Circle still exerts an evil influence on events. Some people have a lust for power and are willing to commit crimes to gain their objectives.
A spiritualist is murdered. Her death may be connected to the politics of the coming election. Pitt must send his wife and children off to the country on their own when his vacation is cancelled. Investigations lead to some surprising connections between individuals, and Pitt finds his reputation threatened before the case is finally resolved. Politics breed strange bedfellows, and Pitt's brother-in-law finds himself in an awkward position where he must decide between a friend and his own career in politics.
It is better to deal with an enemy you know rather than one you don't know. Crimes sometimes go unpunished, even murder.

Rose
5,0 van 5 sterren A chalenging and complex mystery!
24 maart 2017 - Gepubliceerd op Amazon.com
Geverifieerde aankoop
Absorbing! One gets caught up in the Victorian life and customs, and the lives of the Pitt family and their friends, as well as concerned for their safety, and outraged at the injustices. The "hot" political climate of the times is intriguing, and one finds oneself rooting for the party that will provide relief for the people, and the important issues of the day.
Meer lezen
Vertaal recensie in het Nederlands