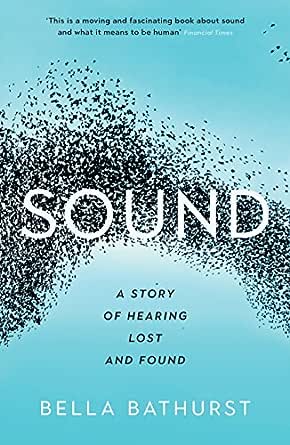 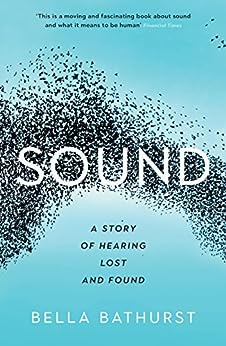 'By the summer of 1998, it had become clear that there was something wrong with my hearing. It didn't happen suddenly but softly, so softly I almost wasn't aware of it happening; sound seemed to have stolen away ...'

For twelve years, Bella Bathurst was deaf. She missed the punchlines and the jokes, avoided busy restaurants and raucous parties, and grew her hair long to cover hearing aids. But then, twelve years later, pioneering surgery on her ears gave her the chance to hear again.

Sound is the extraordinary story of Bella's journey into deafness and back to hearing. Mixing memoir with interviews with soldiers, sign language experts, musicians and mental health workers, Bella explores what it means to live with and without sound, and in the process uncovers a hidden world of sense and connection.

If sight gives us the world, then hearing - or our ability to listen - gives us each other. Warm, wry and honest, this is a story not just for the one in six of us with hearing loss, but for everyone who ever listened.

Published in partnership with the Wellcome Collection.

Wellcome Collection is a free museum and library that aims to challenge how we think and feel about health. Inspired by the medical objects and curiosities collected by Henry Wellcome, it connects science, medicine, life and art. Wellcome Collection exhibitions, events and books explore a diverse range of subjects, including consciousness, forensic medicine, emotions, sexology, identity and death.

Wellcome Collection is part of Wellcome, a global charitable foundation that exists to improve health for everyone by helping great ideas to thrive, funding over 14,000 researchers and projects in more than 70 countries.

Robin Leigh Morgan
5,0 van 5 sterren I CAN SEE CLEARLY NOW ABOUT HEARING !!!
2 december 2018 - Gepubliceerd op Amazon.com
Even though this book had already been published I received an ARC [Advanced Reader’s Copy] print copy of this book from the publisher through an Early Reader giveaway they had on LibraryThing, and the following is my honest opinion.

While the song “Sound of Silence” by Simon & Garfunkel might exalt silence, with such lyrics as ‘The people are talking, without speaking’ referring to all those politicians and their rhetoric causing people to go deaf by not listening to what they’re saying; real deafness is a far greater devastating thing which only a deaf person can understand. Actual silence caused by deafness is an entirely different ballgame, a ballgame which can only be experienced by individuals who are deaf.

What the author, Bella Bathurst, has done here in her poignant and revealing memoir is to share with her readers astonishing factual journey of how she became deaf and how she miraculously regained the gift of hearing twelve years later and the life-changing experiences she’s learned from it.

In the pages of this book Ms. Bathurst gives her readers intriguing understandings regarding the science of sound, which she gained from professionals from different fields. However, not wanting to give any of her readers a one-sided personal experience of deafness, she includes the experiences of other deaf individuals to give a sensitive provocative look at what sound means to hearing individuals like us.

While we can visually see people around us, there’s no way we can possibly connect with them except through speaking and being able to hear what they’re saying.

For giving her readers, as well as myself, a multi-faceted honest investigation of deafness and how extremely important our association with sound is, I’ve given Ms. Bathurst the 5 STARS she’s garnered from this reviewer.
Meer lezen
6 mensen vonden dit nuttig
Vertaal recensie in het Nederlands

She Treads Softly
4,0 van 5 sterren well-written, fascinating memoir and informational account about hearing loss
5 december 2018 - Gepubliceerd op Amazon.com
Sound: A Memoir of Hearing Lost and Found by Bella Bathurst is a highly recommended memoir of a young woman who lost her hearing, then regained it.

In 2004 Bella Bathurst was down to 30% of normal hearing. She had been slowly losing her hearing for six years. This began her twelve year journey of deafness and what she learned about her experience. She did regain he hearing through surgery, but her experience of losing her hearing taught her the richness that hearing brings to our lives. Bathurst explores more than her feelings bringing this beyond being only a memoir. She discusses the history of hearing loss and how it has been handled over the years. She shares interviews she conducted with others who have dealt with hearing loss, ear surgeons, psychologists, and professors. The book discusses the science of sound, the anatomy of the ear, the different types of hearing loss, depression as a result of hearing loss, hearing loss in musicians, and what she and others have learned and experienced as a result of losing their hearing.

This is a well-written, fascinating memoir and informational account about hearing loss. While the opening sailing experience felt over-long, the informational sections were varied, fascinating, and very well done. It made the science behind hearing accessible and engaging. Included at the end are chapter notes for further reading. I felt a great deal of empathy for Bathurst and her experiences, especially after having recently experienced some issues with my sight. It is had to admit that you are losing something you have taken for granted and then have to deal with it and (hopefully) the recovery.

booklover10
5,0 van 5 sterren "Once hearing began to go, it was like watching the cables that tied someone to life snapping...."
16 oktober 2018 - Gepubliceerd op Amazon.com
In the first chapter of her fascinating memoir, "Sound," Bella Bathurst recounts her irresponsible offer to help skipper a sailboat, even though her lack of hearing endangered her mates: "I shouldn't have come on this trip…. I am angry with myself for being incompetent and I am angry with my ears for being unable to hear." "By 2004," she tells us, "I'd been losing my hearing for six years," and was "down to about 30 per cent of normal hearing." When she was twenty-seven, Bathurst visited the audiology department of St. Mary's Hospital in London. Her doctor told her that two incidents of head trauma, one while skiing in 1990 (she was twenty), and the other as a result a car accident in 1997, had damaged the fine hair cells or cilia in her cochlea, and that nothing could be done to reverse this. After she was fitted with hearing aides in 1999, she resigned herself to making the best of a difficult situation. In 2001, she received a set of digital aides that cost six thousand pounds, a big step up from her old analogue ones that could not be as finely tuned.

Bathurst, in clear, lively, and accessible prose, enlightens us about the complex anatomy of the ear, different types of hearing loss, the role that the brain plays in hearing, acoustics, deaf culture, and the ways in which men and women who are "deafened" (have partial hearing loss) as opposed to "deaf" (profound hearing loss), cope every day. Besides signing, lip-reading can help, provided the person to whom you are speaking is facing you and enunciating properly. One problem is that, unless the hearing-impaired use sign language or wear visible devices near their ears, those around them may not know that anything is amiss. As a result, the hearing-impaired frequently struggle to keep up with conversations. They may avoid social gatherings, function less effectively on the job, and in the case of the elderly, become increasingly isolated. Only when patients are diagnosed by a competent otolaryngologist and are subsequently seen by a skilled audiologist can they address the question of what, if anything, can be done.

Bathurst is a determined and ambitious woman who carried on as well as she could but, in spite of her spunky attitude ("I wasn't going to go quietly, and I had absolutely no intention of being even slightly well adjusted about it"), still suffered from occasional depression. Besides telling her story in intimate detail, the author interviews experts in the field as well as individuals who have lost their hearing after toiling in a noisy shipyard, serving in the military, or playing in bands or orchestras. One takeaway from "Sound" is that our environment has become too noisy for comfort, and many of us foolishly take this sense for granted. On the other hand, over time, Bella discovered "that deafness had its compensations and that there were ways of interpreting the world which had nothing to do with hearing." "Sound" is an engrossing, illuminating, and moving work of non-fiction about a topic that significantly affects our physical and emotional well-being.
Meer lezen
3 mensen vonden dit nuttig
Vertaal recensie in het Nederlands
Ga naar Amazon.com om alle 6 recensies te bekijken 4,8 van 5 sterren
Terug naar boven
Over ons
Verkoop bij ons
We helpen je graag
© 1996-2020, Amazon.com, Inc. en dochterondernemingen