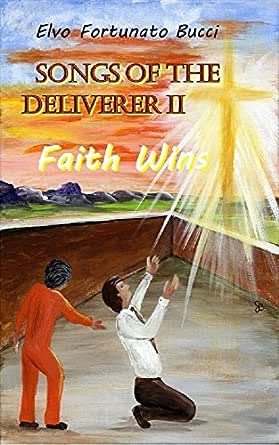 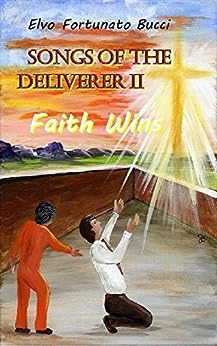 They were witnesses to amazing happenings

...Now they’re fighting for their lives. And yours.

A diverse and forsaken flock of people come face to face with redemption. They soon become believers and followers of the one they call, the Christ. When the source of their faith is gone, it’s up to these ordinary people to tell the world of the miracles he did and the promises he made.

This is the story of the apostles of Christ re-imagined in modern day. All the stories of the New Testament are woven into one compelling novel that reveals how Christianity was born.

If not for the acts of the apostles, Christ would be dead to the world. He lives because they overcame torment and oppression to tell the truth of the Son of God. Their witness is our salvation.

˃ Entertaining way for people of all ages to know Christ more

˃ A unique book that encompasses the entire story of Christian faith

The Deliverer comes...Order your book and know him now

V.E.
4,0 van 5 sterren An Inspirational Read
13 januari 2017 - Gepubliceerd op Amazon.com
Geverifieerde aankoop
While the reader may think this book is about songs, it is actually a testament to faith. Songs of the Deliverer II: Faith Wins by Elvo Bucci is a very enlightening book that is focused on being a different, more modern interpretation of the Bible. Namely, Bucci presents the story in a modern era setting, allowing a contemporary reader to more readily identify with the Biblical characters. This ability lets the reader look into their own personal thoughts and feelings regarding the perspective of the characters' and makes it very accessible. While remaining true to the original story, the author manages, through relaxed and creative writing to re- familiarize the reader with an age old story.

Grady Harp
4,0 van 5 sterren The story of the apostles of Christ re-imagined in modern day
13 januari 2017 - Gepubliceerd op Amazon.com
Geverifieerde aankoop
‘I write to reveal my journey in faith.’ Elvo Fortunato Bucci offers a bit more of his background: ‘I am a fundraiser for a Catholic university living and working in the Midwest. I am a husband and I am a father. And I am a Christian.’ This is the third book he has published – A PERFECT WAR, SONGS OF THE DELIVERER and now SONGS OF THE DELIVERER II.

One cannot disagree with the concept that even contemporary translations of the Bible make the source seem inaccessible: language married with concepts and miracles and predictions and ancient stories can be difficult to convey to not only the young reader but also to the adult critic. Elvo has offered a new way to ‘explain‘ the messages of the Bible – with special emphasis on the New Testament – by placing the translation of the content in contemporary terms, characters, and explanations and for the most part it works.

For those who approach this book without the benefit of Part I Elvo offers a fine explanation of the trail of the story in the Epilogue: ‘A man enters the void of a godless era to bring salvation to the lost and the hopeless. He has no money, owns no possessions, carries no title, and asks for nothing in return for his wondrous deeds. He vows a singular outcome to those who believe: eternity in Heaven. For that, he is judged by the authorities to be a menace and a fraud. His sentence is persecution. Yet he does not appeal the unjust verdict nor submit to their extortion. Instead he offers his life in ransom to liberate his followers. In the end, his words are sent to die along with him. Then the man does something that changes the world. The story of the one sent by God in fulfillment of the prophecy has been told in a prior book. This second book is the story of those called to witness and testify to the truth as it was revealed to them by Christ himself. This is the story of the disciples who knew Christ as a friend, learned his teachings, viewed his miracles, experienced his revelations, watched him die, and saw him rise. Though I was not among them. You see, the truth has been revealed to me not from Christ, but from those first believers who had the courage to stand strong in the face of torment and tribulations and pronounce their witness of the Son of God. I know Christ from the acts of these apostles who withstood great hardships when they could have abandoned Christ and escaped oppression. Amid agony and distress, even while being ostracized and humiliated, they endured. Ultimately, they succeeded. We are the blessed beneficiaries of their glorious triumph. This book is my witness to these messengers of the Word. In this, I testify as one just like you. For I know Christ from the testimony of those who walked side by side with him. And you know Christ from the very same voices. The apostles who were directed by the risen Christ to go and make disciples of all people, first began with me and press on through the ages with you.’

Contemporary language, contemporary characters that seem like people we have encountered, and explanation of miracles and acts in a manner that can make the Bible comprehensible to youth and to those who have grown away from the Church. Jesus is referred to as Emmanuel and descriptions of such acts as the last supper are among the aspects that allow entry into the mysteries of Christianity. Try not to be put off by the crude art of the cover: the writing within is more sophisticated than that. Elvo is to be congratulated on bringing Christianity to contemporary readers, no matter their age. Grady Harp, January 17
Meer lezen
2 mensen vonden dit nuttig
Vertaal recensie in het Nederlands

something to give credit for, especially when it comes to religion.

I already read the first part, even though religion is not a topic I know a lot about

it, this modern twist is a welcome change to those who are caught in a lot of

confusion, given the recent events on our world.

Despite that, I encourage those who knew about the stories told in the bible and

the ones who don’t know anything about it, as this is told in an extremely easy

yet deep way, the dialogue and characters are fill with personality and it gives

know much about them.

I really like this book, it has this spark I’m confident it will caught the attention of

those looking for answers about faith, it’s a strong pillar in everyone’s life, we

Maranda Russell
3,0 van 5 sterren A little overly preachy, but unique
16 maart 2017 - Gepubliceerd op Amazon.com
Geverifieerde aankoop
Before I give my opinion on “Songs of the Deliverer II: Faith Wins” by Elvo Bucci, I want to state that I am not a religious person as of right now, in fact, I consider myself an agnostic. So, I will say that the overt religious tone of this book is a little overwhelming to those who don’t share the author’s faith, however, I believe firmly in judging a literary work on its merit outside of its theological dogma, especially if I happen to not share that particular belief system. So, with putting aside the obvious Christian evangelical tone of the book, I will say that this is a unique way to present the story of Christ and the apostles to a new generation of readers.

This book seems to focus more on the “Acts” stories from the Bible, which actually I do tend to like (I have respect for groups of people who believe something firmly and are willing to be persecuted and even die for those beliefs, even if I don’t share those specific beliefs). There were points that I felt dragged on a bit and parts that were a little confusingly written, but perhaps that is because I didn’t read the first book? Overall, this is an interesting way to try to bring to life these stories from the Bible, but the style may not be for everyone. It almost has an allegorical feel to it at times.
Meer lezen
Een iemand vond dit nuttig
Vertaal recensie in het Nederlands

quirru
4,0 van 5 sterren It is a very interesting research that helps us understand the apostles and therefore Christ
22 januari 2017 - Gepubliceerd op Amazon.com
Geverifieerde aankoop
Songs of the deliverer II: Faith Wins by Elvo Bucci is a book written and dedicated by the author to the young people of this world, because as he say in its prologue “The world we inhabit grows more cynical by the day” which I agree one hundred percent, so this second book is about the apostles and the knowledge they share about the word of God by Christ. The author makes a complete investigation of the apostles in the bible and then he summarizes everything they said about Christ and what they learned and put all together to make the scriptures a lot more understandable by having the facts of each Apostol together at the same time and sequence. In this way is a lot easier to understand the bible (this part of it) and by understanding this It is easier to understand the life of Christ, his actions, his thoughts, his end as a person and the eternal life as the son of God.
Meer lezen
2 mensen vonden dit nuttig
Vertaal recensie in het Nederlands
Ga naar Amazon.com om alle 14 recensies te bekijken 4,1 van 5 sterren
Terug naar boven
Over ons
Verkoop bij ons
We helpen je graag
© 1996-2020, Amazon.com, Inc. en dochterondernemingen