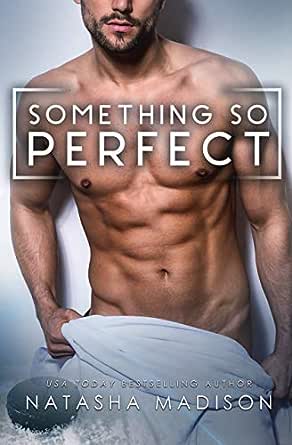 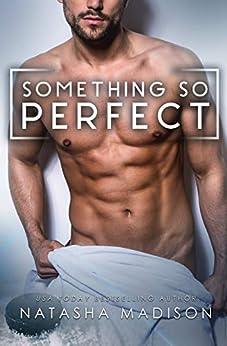 The Second Instalment of the best selling series Something So

Drafted first round pick when I was seventeen, playing first line at eighteen, branded NHL's bad boy at nineteen. At twenty-three I was cut from the team and living back home with my parents. A knock on the door brought an opportunity I couldn’t turn down. All I had to do was prove I learned from my mistakes, so no way would I fall for a chick with a pouty mouth even if I wanted to spend all day devouring it.

When my father gave me a job, I had no idea it would be to babysit some washed up NHL player. He wanted me to be his chaperone, his overpaid babysitter. I thought it was a joke. Then I met him, Matthew Grant. I wasn’t prepared for this particular bad boy. He’s not only hot but he’s arrogant and kinda sweet in a 'you make me crazy' kind of way.
Basically now that he’s finished screwing up his life, he’s decided to turn mine upside down.


She’s the first thing I’ve ever wanted more than hockey.

He’s the guy I know I should stay away from.

But what if this thing that started out so wrong turns into something so perfect?

Matthew Drafted first round pick when I was seventeen, playing first line at eighteen, branded NHL's bad boy at nineteen. At twenty-three I was cut from the team and living back home with my parents. A knock on the door brought an opportunity I couldn't turn down. All I had to do was prove I learned from my mistakes, so no way would I fall for a chick with a pouty mouth even if I wanted to spend all day devouring it.Karrie When my father gave me a job, I had no idea it would be to babysit some washed up NHL player. He wanted me to be his chaperone, his overpaid babysitter.I thought it was a joke. Then I met him, Matthew Grant. I wasn't prepared for this particular bad boy. He's not only hot but he's arrogant and kinda sweet in a 'you make me crazy' kind of way. Basically now that he's finished screwing up his life, he's decided to turn mine upside down.She's the first thing I've ever wanted more than hockey.He's the guy I know I should stay away from.But what if this thing that started out so wrong turns into something so perfect?

Iza Loves Books
3,0 van 5 sterren It was okay
7 augustus 2017 - Gepubliceerd op Amazon.com
Geverifieerde aankoop
I'm a fan of this author's books normally but this one didn't quite do it for me. Much as I liked the characters, I found Matt's behaviour a little hard to tolerate at times. The way the author expressed herself felt repetitive through some of the scenes, but it was nice catching up with some of the characters from other books by the author. It was an enjoyable enough read, but towards the end I found myself skimming through it just to be done with it.
Meer lezen
12 mensen vonden dit nuttig
Vertaal recensie in het Nederlands

AS99
2,0 van 5 sterren His controlling nature was unhealthy
13 november 2019 - Gepubliceerd op Amazon.com
Geverifieerde aankoop
After getting beyond the fact Matthew was a kid in the previous story - I liked the initial premise. I did not like the unhealthy obsession he had with Karrie. Handcuffing her so she could not go on vacation??? Not ok. Why not just go with her? It made me uncomfortable since she didn’t seem to like it, but would forgive his controlling nature. It started to drag on too long. I think other books in the series are with more kids as grown adults. Not sure I can continue it.
Meer lezen
6 mensen vonden dit nuttig
Vertaal recensie in het Nederlands

AJ
5,0 van 5 sterren Love me an alpha caveman!
30 juli 2017 - Gepubliceerd op Amazon.com
Geverifieerde aankoop
I loved this book! A funny, sweet and sexy sports romance with an alpha caveman, a strong and feisty heroine with a habit of talking to herself, and a functional and angst-free love story that had me alternately swooning, grinning goofily and fanning myself at the hotness. This read was a lot of fun but still had a beautifully emotional love story, and I read it in a day, struggling to put it down.

This book follows on from Something So Right, but could be read as a standalone (just be aware that there is some family backstory – though the important bits are rehashed). This is the story of Matthew Grant – we met him as the strong, big-hearted teenager of a single mother who married an NHL legend – and he is now an NHL legend in his own right, but for all the wrong reasons.

Matthew was drafted into the league at 17, and he lost himself to the party lifestyle, which eventually impacted his game and saw him almost lose his career. Now, several years later he is getting his second chance, but with his new team desperate to protect their investment, they appoint him a full-time guardian. Matthew is highly unimpressed at this development, but is even more shocked when he finds that his ‘babysitter’ isn’t a burly old man like he expected, but instead is a hot young woman whose smart mouth and refusal to give in to him has him riled up in a way he’s never been before. And, she’s the boss’s daughter.

Karrie’s father owns Matthew’s team (among other things). She is working her way up in his company, specialising in media and public relations, and so she’s horrified that she’s now going to be babysitting an arrogant, manwhoring brat. She believes she can ignore how gorgeous he is, and the way her body reacts to him, but her one attempt at sex didn’t go so well, and her pent-up need and curiosity has her feeling edgy, and when Matthew moves into her brownstone being all demanding and alpha, it doesn’t take long before everything changes.

I loved this relationship! I was expecting a slow burn as these two strong personalities snark and banter with each other, but their attraction is too strong, their chemistry sizzles, and Matthew moves with the force of a tidal wave. He knows what he wants, he goes for it, and he won’t take no for an answer.

Of course, Karrie, though a little wary, is only too keen to go along with it, and then it’s all on! It’s quick moving, but it felt realistic to me. Matthew and Karrie are together 24/7, and that kind of intensity allows for a fast-paced relationship, and with the attraction and emotion that is brewing between them, I could feel it all along with them.

Their relationship is a great mix of banter and teasing, scorchingly hot sexy time and sweet moments. Matthew’s caveman antics, while sometimes OTT, are so funny, and I love how openly he embraces the whole relationship thing – opening himself up for the first time, and holding nothing back from Karrie. And the emotional builds beautifully.

There are some things they need to overcome – mostly, the secretive nature of their relationship, given that they work together and who Karrie’s father is. And then there’s the dramatic twist that’s thrown in in the prologue. You know it’s coming, and you’re waiting for it to hit, wondering how it’s all going to come about and how it will impact on their story. But for the most part, this book is drama and angst free, and a really easy read. It’s a gorgeous love story with great characters that is lots of fun, and shows us lots of time with them together as a couple, and great progression for their relationship.

Matthew’s parents, Cooper and Parker from Something So Right, are of course a part of the story, and I loved catching up with them and their family. And Lauren and Austin from Tempt the Boss also make an appearance, which I loved! There is a lead in to the next book of the series which will be Allison’s – Matthew’s feisty younger sister – and OMG, what a twist that was! I can’t wait for her story!

I loved this book. It’s lots of fun, and I loved losing myself in a hot, swoony, easy, drama-free read that had me hooked from start to finish. And bonus – there’s not one, but two fantastic epilogues! Woohoo!

denise bailey
5,0 van 5 sterren Need Sequel ASAP!!!
2 augustus 2017 - Gepubliceerd op Amazon.com
Geverifieerde aankoop
This was an AMAZING sequel!!! I LOVED everything about it...totally folks. I have loved this series and when I heard that our guy would be grown I was a bit uncertain how I was going to like this book. This was a big jump as far as time from the last book to this one. I was emotionally connected to each of the entire family and the friends from this series. They are still present and accounted for in this book in such a creative way. I was also very intrigued by how Natasha dealt with Mathews father. Interesting indeed. I would actually love to see that area possibly explored at some point. Let's get back to the story at hand. This couple was hot, our Matthew...OMG...bad boy and hot, hot, hot. The cover, although a great picture, did not do him justice. He is literally written with such a deft hand. It took skill to make him pop off the page and to make me want him in my world. I could be his nana but I'm not gone yet. Our gal was a wonderful match for Matthew. This story was solid and very creative. The twists and turns were very well thought out. Then our author teases us with a gem at the end of this book that left me reeling. I looked at the release date for the next book I was not happy. Now I would want all my answers to this shocker now, now, now Natasha...not next year. I feel as if I am throwing a bit hissy fit here because I want to pout and stomp my feet. I will clearly need to start bugging Ms. Natasha about this next book. We need teasers or a release date much earlier. Ms. Madison should be incredibly proud of this book. I had the best time reading it so a giant thank you Natasha! denise bailey
Meer lezen
6 mensen vonden dit nuttig
Vertaal recensie in het Nederlands
Ga naar Amazon.com om alle 275 recensies te bekijken 4,5 van 5 sterren
Terug naar boven
Over ons
Verkoop bij ons
We helpen je graag
© 1996-2020, Amazon.com, Inc. en dochterondernemingen