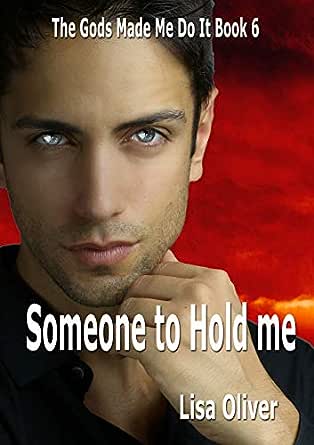 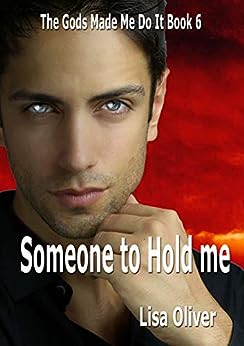 Someone to Hold Me. The Gods Made Me Do It #6

(Can be read as a standalone)

Hades, Lord of the Underworld, has spent years searching the world for his Fated Mate. He's watched his brother and nephews find their "light" and yet he can't find his. On the verge of giving up hope, Hades attends his brother Poseidon's wedding; so outside his comfort zone, but his discomfort proves worth it. Because there, at the reception, he finally sees his light.

It wasn't that Ali was uncomfortable around wolves - he'd been a good friend of Claude's for years. But when one of the wolves at Claude's and Poseidon's wedding gets verbally pushy, he feels he has no choice but to shift and find the alpha. What he doesn't expect is to find a beautiful man with soulful eyes, holding out his hand.

After all Ali and Hades have been through in their lives, you'd think the Fates would be kind to them. But between Cerberus's howling, Persephone's snarking, and Ali's family proving there is more to them than their blatant wealth, Ali and Hades have their hands full creating a life with each other. But maybe, just maybe, the Mother has a gift for them after all.

This is an MM paranormal true mates story intended for adults only.

Gerbera
5,0 van 5 sterren Wonderful story!
14 augustus 2019 - Gepubliceerd op Amazon.com
Geverifieerde aankoop
Such a sweet story about a lonely God finding his mate. This story was about putting things to right for both Hades and Ali. Both of them suffered due to their families neglect, and they both needed someone to stand up for them. All through history, Persephone is portrayed as a poor dear stolen into the depth of Underworld, a kind lady who suffers from her Fate dutifully while Hades is looked at as the evil mastermind who made off with a beautiful innocent maiden and took her to his liar to be ravaged. Who knows if the history had it right? Ms Oliver finally gave Hades his due for all his tireless work and gave him happiness.

Hades might be powerful and almighty but deep down he is lonely and tired of being reviled for simply doing his job. Somebody has to deal with the lowest of the low, and it's not like he signed up for it voluntarily. He despairs of ever finding his mate, and while he still has hope since all his friends find theirs, it begins to slowly dwindle. Poseidon's wedding gives him a chance to mingle and unexpectedly brings him face to face with the cutest chipmunk shifter who is his destined mate. But as old and new insecurities flare up, he struggles with the fledgling relationship. He might be a God but when it comes to being just a man he finds himself lacking. Poor Hades, he just needed to have somebody special in his corner who would see underneath all the power and posturing to the lonely man hurting from his family's careless treatment and from the woman's, who he thought he loved, rejection. I loved how he was with Ali - so gentle, considerate and at times bashful. Just so cute! (I know, he is Hades, but he can still be cute!)

Ali is outgoing, vibrant and no mouth filter outspoken chipmunk shifter. He dreams of finding his mate and yet is a bit scared. He does not have a good example since his snobbish and arrogant family cast him out for one act of kindness long ago. But when he meets Hades, he is not afraid. He is overjoyed that Fates has given him such a gift, since Hades clearly needs someone looking after him, someone to see and understand him. No matter how Hades tries to show himself in a bad light, Ali sees it for what is is - attempts to shock him and distance himself in case Ali decides to leave. But Ali is not deterred and shows Hades what a true mate is! The mouth on him is truly without a filter, but that is exactly what the Underworld needs! I loved his fierce protectiveness of Hades, his fresh outlook on everything that Hades thought was dark and hateful. Ali helped Hades to accept that what he does doesn't define him as a person, that his diligence is something to be proud of, that there are others there for him to help and take some of the burden off his shoulders.

I loved that both men made things as they should be between them and with their families. Hades finally felt accepted, and Ali was where he belonged - with his mate. There is mention of Mpreg in the Epilogue, so be in the know. I loved this wonderful story about finding love, peace and acceptance with oneself and those around you. I recommend it!

ScrappyMom
5,0 van 5 sterren Favorite!
13 augustus 2019 - Gepubliceerd op Amazon.com
Geverifieerde aankoop
This is my absolute favorite! That's saying a lot because while I enjoy this series the series isn't an absolute favorite of mine. However that changed with this book.

I was waiting to see Hades get a book. He wanted a mate so much. I am so pleased that the author took such a unique stance on who would be perfect for Hades. I was expecting something completely different and would have probably been disappointed.

And Baby! Oh, I can't wait for his book either.

Okay, so we learn not everything we read about the Gods were true. Hades has been alone for a long time and he has no one in his corner. That all changes with his mate who I adored from the first time we met him. Such a great writing of that character.

You don't have to read these books in order although I always do. Still this book more that any other in series feels like you can read it as a stand alone and go back to meet the other delightful characters.

This will be a re-read for me. I already know it.

Kandi
4,0 van 5 sterren Couple Goals
13 augustus 2019 - Gepubliceerd op Amazon.com
Geverifieerde aankoop
Hades and Ali were such a great couple. Love how strong Ali is. Author did a great job of not falling into the smaller twink gay man stereotype, which is rare and very much appreciated. I love how Hades was portrayed, as a person who is good, but judged due to his crappy job, and no one taking time to get to know him. As a couple, they complimented each other well.
This is a lower angst level book then this author usually writes, but it was still really good. This author continues to be an autobuy, can't wait for the next in this series. In a side note, I'm dying here waiting for some other series to continue, Necromancer conclusion please.
Meer lezen
3 mensen vonden dit nuttig
Vertaal recensie in het Nederlands

Deana Tyson
5,0 van 5 sterren Another great Lisa Oliver book.
13 augustus 2019 - Gepubliceerd op Amazon.com
Geverifieerde aankoop
What I loved most about this book well everything, you got to meet Hades and watch him fall in love with a wonderful guy that loved him warts and all, wish all relationships could be this great. What did I hate that it ended with a great cliffhanger, as I say with every review loved this book and can't wait for the next book.
Meer lezen
3 mensen vonden dit nuttig
Vertaal recensie in het Nederlands

Kindle Customer
5,0 van 5 sterren A wonderful male/male God story
6 februari 2020 - Gepubliceerd op Amazon.com
Geverifieerde aankoop
This is another great book in the series of the gods of ancient Greece and Egypt finding their mates. This story is about Hades, God of the underworld and Ali, a chipmunk shifter. When they meet at a wedding, a wolf shifter is trying to molest Ali but he shifts and seeks safety with Claude, the wolf Alpha who is standing near Hades. Hades sees a bright light around the chipmunk and knows he has found his mate. He puts out his hand and the chipmunk knows he is safe and wanted, so he hops into the hand. From there he chatters indignantly at the wolf who tried to molest him. Thus sets the tone for a fearless, but lovng mate for Hades. Ali and Hades claim one another and although Hades is nervous about taking such a good, cheerful and loving mate to the underworld, Ali insists on accompanying him. He ends up charming the staff of the uber (demons and hellhounds etc) streamlining the whole place to make it easier on Hades, gets rid of the hated Persephone (who really is a Bitch) and all around making Hades an extremely happy mate. A great feel good book. I think I have read every series and book Lisa Oliver has written and will continue to do so. She is a great author.
Meer lezen
Vertaal recensie in het Nederlands
Ga naar Amazon.com om alle 106 recensies te bekijken 4,9 van 5 sterren
Terug naar boven
Over ons
Verkoop bij ons
We helpen je graag
© 1996-2020, Amazon.com, Inc. en dochterondernemingen