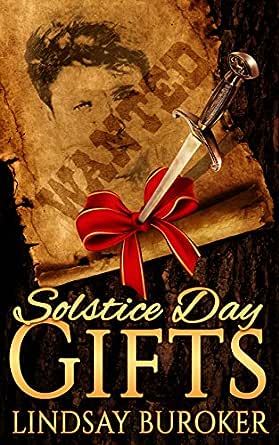 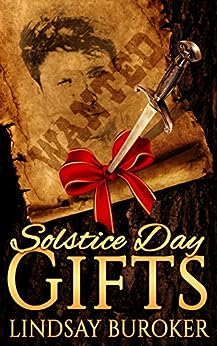 Wendell
4,0 van 5 sterren ENTERTAINING FANTASY ROM-COM
27 juli 2015 - Gepubliceerd op Amazon.com
Geverifieerde aankoop
After toppling an empire, what can the leader of a group of secretive operatives and its deadly assassin do for relaxation?

Well, in Lindsay Buroker’s "The Emperor’s Edge" series, they take a cruise to a tropical island for some well deserved rest, relaxation, and romance. At least, that is what Amaranthe has in mind for herself and her significant other, Sicarius, as this short story begins.

There is only one problem: on this island vacation spot, Sicarius is still a criminal, whose portrait graces numerous wanted posters all over town!

Should this war-weary couple flee back to the stuffy confines of their two person submarine, showing utmost caution as Sicarius suggests, or should they cast their cares into the sea, do a little shopping, find a cozy beach cottage for two, and have a little quality playtime with one another as Amaranthe wishes?

Tsk, tsk, tsk. I’m not going to tell you what they decide. You have to read this one to find out for yourself.

As those that are familiar with "The Emperor’s Edge" series know, it is a rather campy fantasy series that doesn’t take itself seriously, so when you pick up one of these stories, you need to go into the read not expecting serious, grimdark literature. And “Solstice Day Gifts” is a great example of Lindsay Buroker’s light-hearted approach to fantasy, as she crafts a very short, very satisfying romantic comedy with enough action and funny moments to keep even an action guy like me satisfied.

Did this short story “Wow!” me? Not really. But I didn’t go into it expecting that. All I was looking for was a change of pace read that was light, fun, yet still a bit fantastical. “Solstice Day Gifts” definitely met those limited expectations, which is why I’d recommend it to anyone else who enjoys rom-com fantasies.
Meer lezen
Een iemand vond dit nuttig
Vertaal recensie in het Nederlands

Don B
5,0 van 5 sterren Old habits die hard
21 augustus 2019 - Gepubliceerd op Amazon.com
Geverifieerde aankoop
A sensable addition to the series. The draw back is in timing. Readers forget the charactors personalities as they move on to new stories. It takes a while to remember who, what, & where. I still give it 5 stars after I read on, personalites were brought back to life. It is a simple & funny tale that makes logical sense. The " prank " was perfect & added a nice twist to it. As always, the assassin quickly gets flustred & imbarassed.
All in all, I am glad I read it. I have enjoyed all of the stories written about the Seacrest adventures.
Meer lezen
Vertaal recensie in het Nederlands

Anna
5,0 van 5 sterren Lindsay is Awesome!
12 september 2017 - Gepubliceerd op Amazon.com
Geverifieerde aankoop
If Lindsay Buroker wrote it, then I love it. I discovered her by accident looking for new fantasy to read, I stumbled across the 1st 3 Dragon's Blood books in a bundle. They looked good, so I bought them on kindle. I was hooked. I've read all of that series, plus The Emperor's Edge, Flash Gold, and Fallen Empire. She has joined my list of favorite authors. If you like Sci-Fi and/or fantasy, you just can't go wrong with anything she has written. (although I have to say I have not read anything under her pen name because I'm not too much into the romance of it all, but I'm sure they are good too!) Start reading, you won't regret it!
Meer lezen
Een iemand vond dit nuttig
Vertaal recensie in het Nederlands

Ann de Vries
4,0 van 5 sterren Highly Recommended For Fans.
8 april 2015 - Gepubliceerd op Amazon.com
Geverifieerde aankoop
This was a good addition to the EE series and it serves as a bridge to the next entry, 'Republic'. It offers a glimpse of the deepening relationship between Sicarius and Amaranthe, and shows Sicarius growing more humanized under Amaranthe's influence. Like Buroker's other works, it was well written and had excellent dialogue.

Technically, this story could work as a stand alone short, but it works best for those already familiar with the series. Reading this story is not crucial to keeping up with the series' progression, but I think fans of the EE series will love it. It is simply a nice little story that offers a brief respite from the non-stop action of the novels, and allows fans a further look into the loving relationship of two characters they have come to love. Highly recommended for fans.
Meer lezen
Een iemand vond dit nuttig
Vertaal recensie in het Nederlands

Michael H. Donohue
5,0 van 5 sterren A first class series
20 maart 2015 - Gepubliceerd op Amazon.com
Geverifieerde aankoop
Lindsay Buroker has authored some 33 books by my count and an additional 6 books under the pen name Ruby Lionsdrake. Of the books I have read she has had a few slow ones and but one dud that I did not finish. The Emperor's Edge Series consisting of 13 books (2 or 3 are short stories, otherwise they are full novels) is the best of the bunch. It follows an emperor, a government assassin and a ex-policewoman reformer leading a gang of outcasts dedicated to saving the empire and the emperor from the government bad guys. These books follow a nicely woven plot-line with variations all leading to a good end. Buroker's characterization and description is great, you can sometimes smell the people and places described.