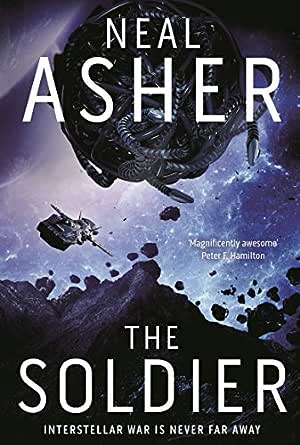 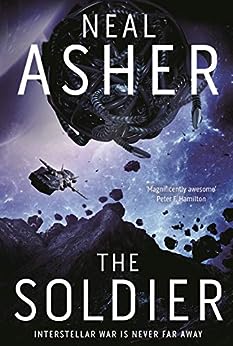 "Neal Asher's books are like an adrenaline shot targeted directly for the brain."--New York Times bestselling author John Scalzi "With mind-blowing complexity, characters, and combat, Asher's work continues to combine the best of advanced cybertech and military SF."--Publishers Weekly, Starred Review "A richly imagined, exotic world, nonstop action, and unimaginable stakes--I couldn't put The Soldier down."--Yoon Ha Lee, author of Ninefox Gambit "Neal Asher's coruscating mix of epic space opera, weaponised Darwinism and high-stakes intrigue channels the primal flame of deep-core science fiction." --Paul McAuley, author of Four Hundred Billion Stars "The Soldier provides everything we demand from Asher: a beautifully complex universe where AIs, aliens and post-humans scheme and struggle--magnificently awesome. Then Asher turns it up to eleven."--Peter F. Hamilton "I had thought with the Transformation trilogy (Dark Intelligence, War Factory, Infinity Engine) that Asher had maxed out what could be done with the Polity setting--that the near-metaphysical implications of the fate of Penny Royal constituted a kind of narrative event horizon. I think I might have been mistaken."--Russell Letson, Locus "In addition to elaborate space battles between gigantic warships and spectacular descriptions of technology, Asher excels at "humanizing" his intelligent machines."--Booklist "Neal Asher just doesn't have the ability to write a book that doesn't have an abundance of complex technology, diverse alien species, mind-bending science, and just flat out entertaining story lines. . . . [he] has gradually become one of the great writers of Space Opera today, right up there with the likes of Peter F. Hamilton and Alastair Reynolds."--Out of this World SFF Reviews "A mind-blowing start to the Rise of the Jain trilogy. . . . takes all the best elements from the Polity universe and weaves them together into a narrative that makes it feel as if everything that came before was only meant to set up the groundwork for this moment."--Worlds In Ink

The Soldier is the first novel in the Rise of the Jain series, by bestselling science fiction author Neal Asher.

Her mission is vital. Her failure is unthinkable.

A corner of space swarms with alien technology, a danger to all sentient life. It’s guarded by Orlandine, who must keep it contained – as it could destroy entire civilizations. An alien intelligence shares her vigil. But she doesn’t share everything with Dragon . . .

Orlandine is hatching a plan to obliterate this technology, removing its threat forever. For some will do anything to exploit this ancient weaponry, created by a long-dead race called the Jain. This includes activating a Jain super-soldier, which may breach even Orlandine’s defences.

Meanwhile, humanity and the alien prador empire also watch this sector of space, as neither can allow the other to claim its power. However, things are about to change. The Jain might not be as dead as they seemed and interstellar war is just a heartbeat away.

S. Lloyd
4,0 van 5 sterren A great start to another great Polity story
1 juni 2018 - Gepubliceerd op Amazon.com
Geverifieerde aankoop
The new trilogy kicks off shortly after the events of the Transformation series, but well before Orbus picks up. Unlike other Polity series, we don't start with a set of intimately familiar characters, and that makes The Soldier a little harder to get into at first. Orlandine was never likeable, Dragon is typically enigmatic, and Earth Central is the same iteration that banged heads with Amistad in the last trilogy. There is no mention at all of The Weaver, and you would expect that the last Atheter would be all up in anything having to do with existing Jain tech.

We do get ECv2 reminiscing about its predecessor's fate, and fans of King Oberon will be happy and eager to see his experiences with the Jain pre-Orbus. And there is nothing to preclude appearances by The Weaver and/or Amistad later in the series.

Cog, Trike, and Angel are all great and intriguing characters on fascinating journeys - the story overall becomes more absorbing as you become more familiar with them and more vested in their fates. The Client's story unfolds at a good pace, and becomes increasingly compelling as the book progresses.

For me, the most satisfying part of The Soldier was the deeply thoughtful way in which the description of the Jain as violent individualists is reconciled with their star-slinging civilization. We find that the lone and lost Engineer makes more sense this way, and can now easily reconcile this with the Squad in Orbus.

Neal has said that he prefers to start a series with at least one book "banked", meaning that when the first is released he would like the second finished or very nearly finished at the time. Here is hoping that is still the case, because I am hoping against hope that Sverl will make a cameo and I don't want to wait a whole year or more to find out.

Cynthia740
5,0 van 5 sterren asher at his best
19 mei 2018 - Gepubliceerd op Amazon.com
Geverifieerde aankoop
my only complaint is i have to wait for the next book in the trilogy. asher combines all the best elements of sf: technology, space opera, morality play, and the on-going quest to define the human condition. while this novel is slowed in the first half by the need to fill in various back stories, it is as mesmerizing as all asher's work.
Meer lezen
9 mensen vonden dit nuttig
Vertaal recensie in het Nederlands

Keogh
5,0 van 5 sterren Wasn't that little 'Engineer' guy a Jain... perhaps he had a big brother.
31 mei 2018 - Gepubliceerd op Amazon.com
Geverifieerde aankoop
Pretty sure that our Author has Ostraconophobia – the fear of crustaceans; because anything that looks like a delicious seafood treat will kill you with extreme prejudice. What is odd about that, one of my other favorite British authors, Brian Lumley, can also make you think twice about ordering that crab boil special. Killer seafood aside, The Soldier is another solid entry in the Polity story line. Most notably, it has a little bit of everything and Asher made it approachable for people who have not read any of the other books. Believe that a new reader could start here and get up to speed quickly… just know that there are entire books to fill in any of the story lines that appeal to you. For instance, there are books dedicated to hoopers, hooders, jain infected people (haiman), jain infected AI, broken golems, dragon, prador, cyborgs, folks with augs, earth central agents, gravity weapons, assassin droids, other ancient species… and the list goes on.

If there is one thing missing, it is the human element. The Polity, unlike Iain Banks’ Culture Novels (or Simmons’ Hyperion books, Dune, Commonwealth, etc...), isn’t about humanity’s destiny. It reminds me of Carl Sagan’s Cosmic Calendar and that human history makes up only the last few seconds of the last minute of December 31st.
Meer lezen
3 mensen vonden dit nuttig
Vertaal recensie in het Nederlands

Nick Mitchell
3,0 van 5 sterren A reluctant review.
3 augustus 2018 - Gepubliceerd op Amazon.com
Geverifieerde aankoop
I've read all of Asher's work so I really hate leaving just 3 stars, but I have found this book to be really hard going because it's all a bit boring. Good books typically have interesting characters, he's disappeared so far up the Sci Fi robot / alien intelligence / AI angle that he's lost sight of this. I don't care about most (all?) of the "characters" (if I can call them that) in this book and as a result am struggling to get past the halfway mark. I hope that he gets back to his previous form and in future books shows a bit more humanity, in whatever form that may come.
Meer lezen
11 mensen vonden dit nuttig
Vertaal recensie in het Nederlands

paulk
5,0 van 5 sterren Put me in a cold coffin and don’t bring me back to life till the next book!
5 augustus 2018 - Gepubliceerd op Amazon.com
Geverifieerde aankoop
OK I loved this book. Thanks Asher! My heart races at the mention of Ian Cormac. Neal Asher has taken us back 5 million years to weave this amazing thrill ride in his “present day” Polity.
To finally get a history of the Jain to chew on as the action unfolds in a great layered intertwined storyline packed with action is quite a payoff in this “beginning of the end” first book of a new series. Kudos for upgrading an interesting charter from previous books as the de facto hero of this one,
Orlandine! She is amazing, and (she would hate me for saying so) the heart of the Story. When did Dragon become such a chatterbox, something big is happening and Neal Asher delivers! My brain is itchy as if a thousand Jain tentacles are writhing around trying to catch up to what is happening here. Hang in there Trike! it ain’t over yet!
Meer lezen
3 mensen vonden dit nuttig
Vertaal recensie in het Nederlands
Ga naar Amazon.com om alle 77 recensies te bekijken 4,2 van 5 sterren
Ontdek het beste van shopping en entertainment
Gratis en snelle bezorging van miljoenen producten, onbeperkt streamen van exclusieve series, films en meer
> Ontdek Prime
Terug naar boven
Over ons
Verkoop bij ons
Amazon-betaalmethoden
We helpen je graag
© 1996-2020, Amazon.com, Inc. en dochterondernemingen