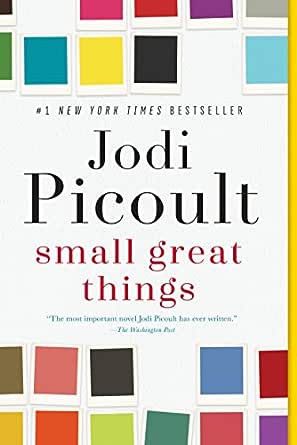 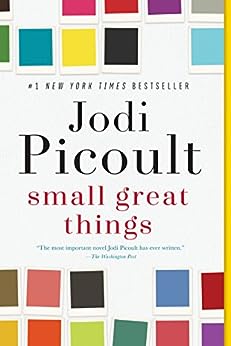 Praise for Jodi Picoult:
"Picoult is a skilled wordsmith, and she beautifully creates situations that not only provoke the mind but touch the flawed souls in all of us."" --Boston Globe"

#1 NEW YORK TIMES BESTSELLER • With richly layered characters and a gripping moral dilemma that will lead readers to question everything they know about privilege, power, and race, Small Great Things is the stunning new page-turner from Jodi Picoult.

SOON TO BE A MAJOR MOTION PICTURE

“[Picoult] offers a thought-provoking examination of racism in America today, both overt and subtle. Her many readers will find much to discuss in the pages of this topical, moving book.”—Booklist (starred review)

Ruth Jefferson is a labor and delivery nurse at a Connecticut hospital with more than twenty years’ experience. During her shift, Ruth begins a routine checkup on a newborn, only to be told a few minutes later that she’s been reassigned to another patient. The parents are white supremacists and don’t want Ruth, who is African American, to touch their child. The hospital complies with their request, but the next day, the baby goes into cardiac distress while Ruth is alone in the nursery. Does she obey orders or does she intervene?

Ruth hesitates before performing CPR and, as a result, is charged with a serious crime. Kennedy McQuarrie, a white public defender, takes her case but gives unexpected advice: Kennedy insists that mentioning race in the courtroom is not a winning strategy. Conflicted by Kennedy’s counsel, Ruth tries to keep life as normal as possible for her family—especially her teenage son—as the case becomes a media sensation. As the trial moves forward, Ruth and Kennedy must gain each other’s trust, and come to see that what they’ve been taught their whole lives about others—and themselves—might be wrong.

With incredible empathy, intelligence, and candor, Jodi Picoult tackles race, privilege, prejudice, justice, and compassion—and doesn’t offer easy answers. Small Great Things is a remarkable achievement from a writer at the top of her game.

“Small Great Things is the most important novel Jodi Picoult has ever written. . . . It will challenge her readers . . . [and] expand our cultural conversation about race and prejudice.”—The Washington Post

“A novel that puts its finger on the very pulse of the nation that we live in today . . . a fantastic read from beginning to end, as can always be expected from Picoult, this novel maintains a steady, page-turning pace that makes it hard for readers to put down.”—San Francisco Book Review

Georgia
3,0 van 5 sterren Truly taken aback by underlying attitude
7 september 2018 - Gepubliceerd op Amazon.com
Geverifieerde aankoop
Picoult has a very intriguing story here. She proposes very real dilemmas, enough so to cause you to really examine previous notions. She produces a plot that maintains your interest to the very end. However, she makes a couple of misguided assumptions and ignorant statements that totally disrupted my thoughts and insulted the reader. Her comments that Tea Party members are just Klan members in disguise is ludicrous. What about Black members of the Tea Party? They do exist. What about all the other minorities who agree with the conservative views of the Tea Party? Are they racist bigots? Totally insulting!! The story could have done without these veiled insults entirely and been a good story. There are also the insults to those who watch Fox News, insinuating that there is trash news on that is unfit for children. Again, this is insulting to a great many Americans, a good majority of Americans, and it was totally unnecessary in the frame of the story. You disappoint me thoroughly, Ms. Picoult. This is the last of your books that I will read. I, by the way, am not a Tea Party member, but I know a good number of them, good people who love this country in all its diversity. Shame on you.
Meer lezen
211 mensen vonden dit nuttig
Vertaal recensie in het Nederlands

Chemin
5,0 van 5 sterren I saw myself in this story
30 oktober 2016 - Gepubliceerd op Amazon.com
Geverifieerde aankoop
As a "successful middle-class" African-American woman I was truly stunned to recognize so many aspects of my own life in Ruth. I have read every Picoult book - some twice - but never have I had my own experiences articulated so effectively by someone who isn't a person of color. I finished it yesterday morning and was rattled all day by the insights and depth of honesty revealed here. I still am, but had to take a moment to post everywhere and say THANK YOU!! Jodi, I read your acknowledgments of how you created this book, and I wish I could meet you. I am awed and will recommend this book to anyone I know: starting with my husband. Blessings to you for your courage, research and determination to see beyond what you knew, what was comfortable - and take this risk.
Meer lezen
922 mensen vonden dit nuttig
Vertaal recensie in het Nederlands

Hazel Sheldrake
5,0 van 5 sterren Small great things has changed my outlook
11 augustus 2017 - Gepubliceerd op Amazon.com
Geverifieerde aankoop
I am South African. I grew up in apartheid South Africa. Nelson Mandela was released from prison when I was 18 years of age.
It was a renewing of the mind for me. I had to learn to think differently. I had to see things differently. It sounds crazy, but it was as if I was brainwashed. Brainwashed by my country and by my upbringing.
But, South Africa legalized apartheid, named it, called it into existence. As wrong as that is, it was out there, known to all.
When I read small great things, I felt like America had this disease, this underlying disease that no one knew about. It rots from the inside. And the entire nation walks around pretending it's all ok.
In some ways, in South Africa, we are blessed, our disease was a big rotting sore, and we cut it open and it oozed puss and blood and it was not nice to look at, and it was shameful, but we knew it was there and that we had to do something about it. So we cut it open and exposed it to the world, but most importantly to ourselves, and that is where the healing began. We still have a lot to learn, we still have a long road ahead, but we are healing and learning to love again. I pray the same for America.
Meer lezen

Joyce Parker
1,0 van 5 sterren RIPPED FROM THE HEADLINES!
18 december 2018 - Gepubliceerd op Amazon.com
Geverifieerde aankoop
Author Jodi Picoult had a sermon she wanted to preach. She explains in the Author’s Note at the end of the book how she wanted to write a book about racism for two decades. In Small Great Things, she indulged her wish.

Before she could preach her sermon though, she had to build a pulpit. Picoult spends the first half of her book building that pulpit from the frayed headlines of news stories over the past decade, many of which have been retracted or proved wrong. (Headlines can be unreliable.) But build it she does; laboriously, flawed, shaky and stretching the credulity of the reader. I could list the ridiculous events readers are expected to swallow, but there are too many. It would bore you, and me, to try. Read it and you can be entertained by highlighting the “ripped from the headlines” events.

It’s hard to care about a story if the characters aren’t believable or sympathetic. Picoult falls short in the character development also. To support her impending sermon, she had to create characters that would serve her message, 2 dimensional almost describes them, maybe 1.5-D would be more accurate. Ruth, the black nurse, is the pure snow-white angel, Turk, the white supremacist, is the black evil devil. And so they stay until the end when Ruth is saved by a now-enlightened social justice warrior public defender trust baby, and Turk is redeemed by his love for his wife who he finds out is half black. (Oh! The irony!) Don’t worry, Turk’s half black wife is conveniently disposed of to allow him an uncomplicated redemption.

The preaching really gets going in the trial, which starts after the pulpit is sufficiently built. We are expected to forget the shaky, inconsistent and defective foundation and now focus on the problem of racism, and white privilege. After all, Picoult tells us in the Author’s Note that her intended audience is the privileged white class that arrogantly claims not to see color.

I’m still left to wonder why people with a smidge more melanin in the top layer of their skin still need to be rescued, saved, explained and all the other patronizing remedies privileged whites foist on their behalf. How condescending. When will melanin-challenged people allow abundant-melanin people to be something other than victims? When will abundant-melanin people refuse to be classified as victims. I guess as long as there is money to be made and power to be had while pushing that meme, we will need a victim class.
Meer lezen
64 mensen vonden dit nuttig
Vertaal recensie in het Nederlands
Ga naar Amazon.com om alle 8.607 recensies te bekijken 4,7 van 5 sterren
Terug naar boven
Over ons
Verkoop bij ons
We helpen je graag
© 1996-2020, Amazon.com, Inc. en dochterondernemingen