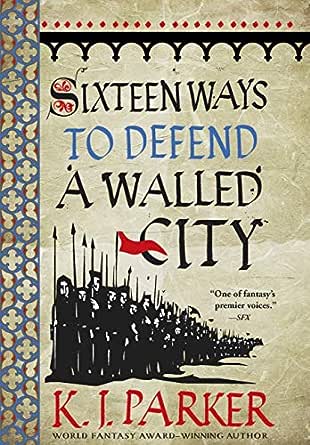 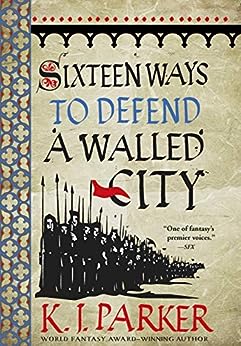 "Parker's acerbic wit and knowledge of human nature are a delight to read as he explores the way conflict is guided, in equal measure, by the brilliance and unerring foolishness of humanity . . . . Thoroughly engaging."--RT Books Reviews on The Two of Swords: Volume One

"[Sharps] is a ripping good adventure yarn, laced with frequent barbed witticisms and ace sword fighting... Parker's settings and characterizations never miss a beat, and the intricate political interplay of intrigue is suspenseful almost to the last page."--Publishers Weekly on Sharps

"This is another splendid offering from K.J. Parker, the (pseudonymous) British fantasist who seems incapable of writing in anything but top form."--Locus on Sharps

"Well-crafted, powerful and downright unmissable"--SFX on The Company

"Parker carries the reader on a headlong gallop to the powerful conclusion."--Publishers Weekly on The Company (starred review)

"Launches a witty adventure series . . . Readers will appreciate the infusion of humor and fun-loving characters into this vivid and sometimes grim fantasy world."--Publishers Weekly

"Brilliant."--Locus on The Engineer Trilogy

K. J. Parker's new novel is the remarkable tale of the siege of a walled city, and the even more remarkable man who had to defend it.

A siege is approaching, and the city has little time to prepare. The people have no food and no weapons, and the enemy has sworn to slaughter them all.

To save the city will take a miracle, but what it has is Orhan. A colonel of engineers, Orhan has far more experience with bridge-building than battles, is a cheat and a liar, and has a serious problem with authority. He is, in other words, perfect for the job.

Sixteen Ways To Defend a Walled City is the story of Orhan, son of Siyyah Doctus Felix Praeclarissimus, and his history of the Great Siege, written down so that the deeds and sufferings of great men may never be forgotten.

Other books by K.J. Parker:

Engineer Trilogy
Devices and Desires
Evil for Evil
The Escapement

Novels
The Company
The Folding Knife
The Hammer
Sharps

Lana Dav
4,0 van 5 sterren Great fantasy for most... *but*
12 april 2019 - Gepubliceerd op Amazon.com
Geverifieerde aankoop
I would say that up to 80% of the Kindle ebook I would have said this book is one of the best fantasies I have read in years. If you enjoyed "The Martian", you will love the level of detail, if you didn't you will enjoy the less detail Parker includes in the engineering feats. Beyond the action of the book there are some really good conversations around colonialism and what that means when you don't fit into the main narrative... a fun, interesting story with a meaning, layers, etc.

My issue with it comes from the context of who I am and the author's lack of empathy for me as a human. I know that sounds weird, but what I tend to notice is that you never see in a book written by a woman a comment/note/etc of how "men are inherently XYZ, but that tends to make them better not worse, like you might imagine". That note of paternalistic explanation in some writing keeps reinforcing and solidifying the roles women are constrained in. I've been a fan of science fiction/fantasy since I could read (Winnie Pooh -> Chocolate Milk Drinking Vampires -> Asimov -> Dune -> Bujold -> Butler -> Pratchett +++), but as I get older the more I get *hurt* when I encounter very simplistic/idealistic representations of women. To be fair, a number of secondary characters get painted in very broad strokes (I have to say I absolutely adored the engineeredness of Artavasdus), but those strokes were not explained away due to their sex.

So, I'd definitely recommend you buying this book if you like sf/f. But I hope that this review will make you think when you come to those passages and what that sounds like if someone made that comment about your demographic (and don't just say the author meant it as a compliment, that is weak intellectual reasoning not worthy of a sf/f reader).
Meer lezen
73 mensen vonden dit nuttig
Vertaal recensie in het Nederlands

This book ended due to laziness and lack of imagination by the author.

The book was clever, smart, and interesting, the story of an engineer thrust into command and defense of a city, for an Empire he does not love. His tricks, his cleverness, his engineering, are paramount. The attackers create a personal dynamic. The book has built towards some sort of resolution, and you become very excited to finish.

Suddenly the main character gets a headache and is very tired and things are fuzzy from his point of view. During the final assault! Suddenly a deux ex machine force arrives to save the day. Suddenly, the author loses interest in his own characters, and we get an end note from a thousand years later. No telling of the assault, no more engineering solutions, no perspicacity or action from the main character. The author failed and he failed due to lack of imagination.

The book ends with a huge "whatever" from an author who just basically quit on his own story. I gave it two stars because it had promise and held that promise for 4/5 of the book, but why buy this kind of crashing disappointment?
Meer lezen
35 mensen vonden dit nuttig
Vertaal recensie in het Nederlands

Kindle Customer
2,0 van 5 sterren Expected something much better
19 mei 2019 - Gepubliceerd op Amazon.com
Geverifieerde aankoop
If you know nothing about machines, engineering and ancient warfare you will be delighted. If you have some knowledge of any of these subject, enjoying the book is next to impossible. Every mention of technology (and the book is about engineer, remeber?) is totally wrong, from siege engine ammo production, usage and placement of these engines to time to cure linen armour to fleet composition and crew numbers. From technical point of view is not even fairy tale, it is bad trip description or worse- season 8 "Game of thrones".

Pity, really, I liked historical novels of Tom Holt and was looking forward to this one. Was unable to finish it, maybe there is a twist to the tale - like all military secrets were purposefully messed up with by some kind of censorship :)
Meer lezen
24 mensen vonden dit nuttig
Vertaal recensie in het Nederlands

Brett
5,0 van 5 sterren Parker's Most Accessible (and Possibly Best) Novel to Date
9 april 2019 - Gepubliceerd op Amazon.com
Geverifieerde aankoop
The day has finally come. I couldn't be more excited to share my thoughts on this wonderful piece of fiction! Full disclosure, I was lucky enough to read Sixteen Ways to Defend a Walled City months in advance and have had a lot of time to think about it and what it means to me. I’m in no way representing K.J. Parker, Orbit Books, and I’m not getting paid to write this.

To sum up my review for this book in a short blurb:

Sixteen Ways is a pretty quick, approachable read with an incredibly likable protagonist. It’s excellently paced thanks to its sharp dialogue and its never-ending list of challenges for the protagonist to overcome. This is Parker’s most accessible novel yet and I think it could go toe to toe with The Lies of Locke Lamora and The Name of the Wind

For those who need more convincing, here’s a more in depth review:

Sixteen Ways to Defend a Walled City by K.J. Parker feels like a study on heroism. I think it was the Greeks who defined heroism as someone who put the needs of the community before their own, and Sixteen Ways is essentially all about challenging that definition. Can one really put their community first? Is it possible to serve your community and still get what you want? Is it worth being a hero if your community has never welcomed you? Is there a difference between the hero that society wants versus the hero that it needs?

If you’ve never read Parker before, this is undoubtedly his most accessible novel yet. It’s very well paced and there’s always a new challenge for the protagonist to overcome. There is still some of Parker’s classic technical writing sprinkled throughout the book, but it’s done so tastefully and infrequently that I can confidently say that no part of this novel will bore you. For those who love the more dense Parker books (like his trilogies), I can assure you that a lot of what makes Parker great is still present in this more crowd-pleasing novel.

Sixteen Ways is probably the most unique book that K.J. Parker has written to date. For starters, it’s his first full-length novel that uses a 1st person perspective. More importantly, Sixteen Ways stars one of Parker’s most likable characters to date: Orhan walks the line between lovable rogue and honorable hero in the best possible way. His unstoppable optimism will likely charm you within the first few pages. What also makes Orhan so great are the people he surrounds himself with. Despite being a 1st person novel, Sixteen Ways does not skimp on side characters who leave a lasting impression.

Next, I need to dedicate an entire paragraph to what I’ll call “the conversation”. By this, I mean that there’s a specific, lengthy conversation that takes place in this book, and it’s quite possibly the greatest dialogue between two characters that I’ve ever read. You’ll absolutely know it when you see it, but essentially, this conversation contains some razor-sharp dialogue that pierces through the narrative (while still feeling very in character) and if you’re anything like me, it might leave you questioning your own worldview for the next few months.

One final point: many of you might look at this book and think “No magic? No supernatural elements? No thank you”, and you’re 100% completely entitled to your preferences and tastes. But I implore you to give this book a shot. If anything, you can spend some time verifying how important magic is to you while reading an excellent story.

I’m (obviously) incredibly biased, but I truly think that this book could become a new favorite for fantasy fans. A year from now, I hope that Sixteen Ways is recommended alongside The Name of the Wind or The Lies of Locke Lamora. It has some great dialogue, a memorable protagonist, and a gripping plot with no brakes.
Meer lezen
24 mensen vonden dit nuttig
Vertaal recensie in het Nederlands
Ga naar Amazon.com om alle 47 recensies te bekijken 4,2 van 5 sterren
Terug naar boven
Over ons
Verkoop bij ons
We helpen je graag
© 1996-2020, Amazon.com, Inc. en dochterondernemingen