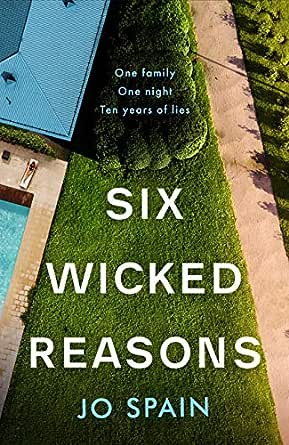 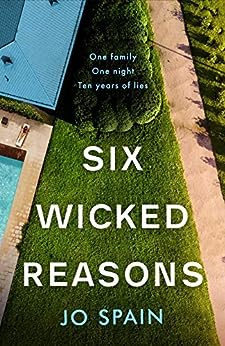 Six Wicked Reasons: A gripping new thriller with a breathtaking twist from the number one bestseller (English Edition) Kindle-editie

cakegobbler
5,0 van 5 sterren Another great mystery from Jo Spain
22 januari 2020 - Gepubliceerd op Amazon.com
Geverifieerde aankoop
This was another page-turner and worth the wait. I have no hesitation in recommending this author. A great ending! Read it!
Meer lezen
Vertaal recensie in het Nederlands

SandyJ21
4,0 van 5 sterren Even better than a Christie
23 januari 2020 - Gepubliceerd op Amazon.com
EXCERPT: Clio let herself hope. She let herself imagine this man her dad planned to hire would find her brother. Or at least tell them what had happened. She couldn't know that by the following spring, he would return with the worst news.

That Adam was probably dead. She couldn't know that her father would convey that to her mother. And that he would badger her to accept it, at exactly the same time Ryan took a turn for the worse. and that her mother's heart, fit to burst with love for them all, would finally burst with sadness. Months later it would only be Clio and Ellen and their father left in Spanish Cove. No Adam, no Ryan. James enjoying his life in Dublin. Kate scarpering up there as fast as she could. Her mother cold in the ground.

From eight to three.

From loud to silent.

ABOUT THIS BOOK: It's June 2008 and twenty-one-year-old Adam Lattimer vanishes, presumed dead. The strain of his disappearance breaks his already fragile family.

Ten years later, with his mother deceased and siblings scattered across the globe, Adam turns up unannounced at the family home. His siblings return reluctantly to Spanish Cove, but Adam's reappearance poses more questions than answers. The past is a tangled web of deceit.

And, as tension builds, it's apparent somebody has planned murderous revenge for the events of ten years ago.

MY THOUGHTS: This is the third book I have read by this author, and it falls somewhere between The Confession, which I didn't enjoy, and Dirty Little Secrets, which I adored.

At the centre of this story is a dysfunctional family - extremely dysfunctional. A controlling father, a dead mother, an eldest son who will do anything to succeed, another who is a drug addict, and one who is busy trying to find himself. The girls are no better, Kate has left home as fast as she could for the bright lights of the city, Ellen has ensconced herself in the family home to care for their father, and Clio does a runner to New York.

The story is narrated over different time frames, and by the voices of the different children and Detective Rob Downes, investigating the suspicious death of their father, Frazer Lattimer. Yet despite the multiple narrators and different time frames, it never gets confusing. Jo Spain has choreographed a beautiful ballet of shifting times and views, while keeping the story flowing, and the mystery of the perpetrator intact. I honestly didn't have any idea 'whodunnit' despite some really wild guesses. Reminiscent of Agatha Christie's And Then There Were None, this is even better!

THE AUTHOR: Jo Spain is the author of the Inspector Tom Reynolds series. Her first book, top ten bestseller With Our Blessing, was a finalist in the 2015 Richard and Judy Search for a Bestseller. The Confession her first standalone thriller, was a number one bestseller and translated all over the world.
Jo is a graduate of Trinity College Dublin, a former political advisor in the Irish parliament and former vice-chair of InterTrade Ireland business body.
She now writes novels and screenplays full-time. Her first co-written TV show TAKEN DOWN was broadcast in Ireland in 2018 and bought by international distributors Fremantle.
Jo lives in Dublin with her husband and four young children. In her spare time (she has four children, there is no spare time really) she likes to read. Her favourite authors include Pierre Lemaitre, Jo Nesbo, Liane Moriarty, Fred Vargas and Louise Penny. She also watches TV detective series and was slightly obsessed with The Bridge, Trapped and The Missing.
Jo thinks up her plots on long runs in the woods. Her husband sleeps with one eye open and all her friends have looked at her strangely since she won her publishing deal.

DISCLOSURE: Thank you to Quercus Books via Netgalley for providing a digital ARC of Six wicked reasons by Jo Spain for review. All opinions expressed in this review are entirely my own personal opinions.

Yvo @ It's All About Books
4,0 van 5 sterren Well constructed, slow building and cleverly executed thriller
16 januari 2020 - Gepubliceerd op Amazon.com
One family. One night. Ten years of lies. And six wicked reasons to kill someone. Talk about an enticing blurb! I admit that I was sold as soon as I read the blurb of Six Wicked Reasons and I have been looking forward to dive into Jo Spain's newest ever since I first heard about it. I had that feeling of premonition that it was going to be a scorcher and one heck of a ride, and guess what?! My intuition turned out to be absolutely right!

The blurb talks about a clever and gripping thriller, and I can definitely agree with that. The power of Six Wicked Reasons is in its slow building up of tension and suspense, only to blow you completely away once you reach the mayor plot twists near the ending. Trust me, you might guess part of it, but you will never guess the full truth of this brilliantly executed and clever plot twist bomb! What a way to mess with the minds of us readers... It doesn't happen all that often anymore, but I always love it when thrillers manage to surprise me the way Six Wicked Reasons managed to do.

Six Wicked Reasons is told with the help of multiple POVs, giving us insight in both the perspective of the different members of the Lattimer family and those investigating the death of Frazer. I do confess it was a bit of a struggle having to juggle so many different characters and perspectives in the beginning, slowing down the pace considerably and making it harder to keep track of everyone. Especially since each character seemed to be hiding something and is most definitely treated as a suspect, making you want to remember all the details while you search for clues, and this can become a little daunting. BUT. Once you get used to the big cast of characters and start differentiating both their personality traits, little quirks and hints at secrets, things are getting a whole lot more entertaining.

The main focus in Six Wicked Reasons is on two important events: the disappearance (and reappearance after ten years) of one of Frazer Lattimer's sons, Adam, and the death of Frazer himself. Switching back and forth between past and present, we slowly learn more about the different members of the Lattimer family and what secrets they are hiding. Especially relating to Frazer's death: everyone seems to be having a plausible motive and reason to want the old man dead, but which of them is guilty? Or was it all an accident? And what happened to Adam all those years ago? There are a lot of questions involved and while some get answered along the way, you will mostly find yourself with more questions than answers during most of the ride. This slow building of suspense definitely makes the bang of the plot twist bomb ending feel all the bigger!

As for the characters... I have to be honest here and say I wasn't really a fan of most of them. That feeling aside, it definitely shows it wasn't easy for the Lattimer siblings to grow up with Frazer as a father, and it was truly intriguing to see their flawed characters being developed in a realistic way. They weren't exactly likeable, but they made for a very interesting cast of characters and I had fun trying to figure them out. The whole question of who was behind Frazer's death was a great start for some serious sleuthing and you will come to suspect every single one of the persons on that boat. The perfect locked-room mystery and with an outcome I definitely didn't see coming!