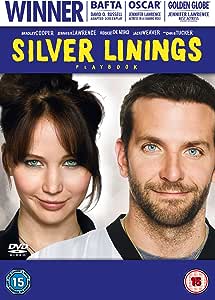 Academy Award-winning romantic comedy based on the novel by Matthew Quick. Bradley Cooper stars as Pat Solitano, a former high school teacher fresh from a stint in a mental institution who moves back in with his parents in an ill-fated attempt to reconcile with his ex-wife. His life begins to come together at last when he meets Tiffany (Jennifer Lawrence), a recently-widowed amateur dancer with problems of her own, and also begins to reconnect with his obsessive-compulsive father, Pat Sr (Robert De Niro). Lawrence won the Academy Award and Golden Globe for her performance and David O. Russell received the BAFTA for Best Adapted Screenplay.

Mini
5,0 van 5 sterren When the Bipolar Meets the Borderline
19 augustus 2019 - Gepubliceerd op Amazon.com
Geverifieerde aankoop
Patrick Solitano (Bradley Cooper) is ready to face the world! After a stint at a mental health facility, Pat wants to go back to teaching and to pursue his wife (Bea Bree). If he works hard enough, she’ll remove the restraining order and give him another chance. But is he all better? He still goes through manic episodes, and his parents (Robert DeNiro and Jacki Weaver) suffer the consequences. He’s not taking his medication — doesn’t want to feel “foggy” all day. But then he meets his friend’s sister-in-law, a beautiful young widow named Tiffany (Jennifer Lawrence), who appears to have mood-related issues of her own. Pat wants his wife back and Tiffany offers to help. How? With dance lessons. She’s not a great dancer herself, but it helps relieve stress, and she thinks Pat could benefit from a few dance lessons. Tiffany has a hidden agenda though. She’s falling in love with Patrick. She hopes he will feel the same way. She also bonds with his football-obsessed father — aiming for more meaningful enmeshment. But will Patrick ever see past his self-inflicted fog?

I didn’t know what to make of this movie at first. Seemed risky — a story about a man with such a controversial mental health problem (controversial due to the constant stigmatization, but more on that later). I never read the book this movie is based on, so I dived in without knowing what to expect. I love it! LOVE. IT. Bradley Cooper shines in this film! He shows the depths of his talent, and he humanizes a man with little to no control of his emotional faculties. And Jennifer Lawrence? She won an Oscar for this role, need I say more? Even though no one knows what Tiffany’s problem is (even Patrick is at a loss), it is clear that she suffers from Borderline Personality Disorder. I can see why the writer might have done this. People confuse BPD with BD all the time. Bipolar is a mood disorder and Borderline is a personality disorder. They both have mood swings, but the similarities end there.

Bipolar Disorder — once known as “Manic Depression” — is marked by radical changes in mood, energy, thought patterns, and behavior. Borderline Personality Disorder is when you have difficulty regulating your emotions, most of which is triggered by an extreme fear of abandonment. BD is treatable through medication and mood-stabilizing exercises. BPD is also treatable, but not through anti-depression, anti-anxiety or anti-psychosis medication (like Zyprexa). (Hence the scene where she tells Pat that Xanax and Klonopin don’t seem to work on her.) BPD is not a chemical imbalance in the brain — the Borderline’s brain is literally underdeveloped, from low levels of Oxytocin in the frontal lobe. This leads to self-destructive behavior, like cutting, substance abuse or sleeping with multiple partners. Dialectical Behavior Therapy is the most effective treatment for BPD. They have to do this for a lifetime. By dancing, Tiffany has come up with her own version of DBT, but she still needs the real thing. Borderline is one of five personality disorders in the Cluster B (the “Wild” cluster). Unfortunately, that means BPD is clustered with narcissists, sociopaths and psychopaths. Unlike those three disorders, people with BPD still feel love and empathy toward others (at least those who don’t have narcissistic or psychotic tendencies), and therefore they’re more treatable than the others. When we think of BPD, we think Glenn Close in FATAL ATTRACTION, but Tiffany is a more realistic portrayal of a borderline. (Another realistic borderline is Clementine in ETERNAL SUNSHINE OF THE SPOTLESS MIND, played by Kate Winslet. And a good example of a sociopathic borderline is Amanda Seyfried’s character in CHLOE.) BPD and the other Cluster B disorders are grossly misdiagnosed all the time, hence the reason why Tiffany and the others don't know what is wrong with her.

So I love this movie! I love movies that make me think, and this one does it for me. It has complex characters, but the plot is still fun and full of heart. It has such an amazing cast. Besides Cooper, Lawrence and DeNiro, we also have Chris Tucker, Julia Stiles and Paul Herman, but the true star is the theme of this movie. People stigmatize mental health disorders an awful lot, especially Bipolar Disorder. If someone exhibits high levels of emotion, that person is immediately labeled a “bipolar.” We MUST stop doing that. 1) People with Bipolar Disorder deserve to live a dignified life, and they don’t need some jerk belittling and stigmatizing their condition and 2) unless you have a PhD in Psychology, you have no business diagnosing others (or yourself).

Great movie! It gets five solid Coconut and Hazelnut Cold Brew Iced Coffees (with a touch of brown sugar)!

Sophia Redmond
5,0 van 5 sterren A Must See
13 november 2017 - Gepubliceerd op Amazon.com
Geverifieerde aankoop
This film has tremendous relevance for me personally, as mental illness runs in my family. Bradley Cooper portrays a retired school teacher who lives at home with his two parents, and suffers very profoundly with manic-depression after staying in a hospital for a while. His manic episodes are centered around a wife who cheated on him at his former place of employment, a public school where he was an English teacher. He has to live within the confines of a restraining order against him (from his ex), and his friends, parents and siblings who want him to find love again. He shows up on a blind date with one of his married couple friends, to meet Jennifer Lawrence...a lot younger than him, but a widow who is ready to re-enter the singles dating scene. She has a dance studio where she spends all her time, and is planning to enter a dance contest on New Years Eve. Bradley Cooper very reluctantly but at the advice and hard pushing of his parents, engages as her dance partner. His running addiction makes him a fit partner for her. She doesn't care that he is Bipolar, she just needs a partner. I have seen this film a couple times and it won best actor for Jennifer Lawrence, based on a scene in the dance contest in the end that showed her determination and hope, and how Bradley Cooper held her up like an Olympian doubles figure skater. I saw this film in theaters first, then purchased it. Cooper finally admits to himself that he doesn't want to reconcile with his wife after the restraining order elapses, and some uncomfortable, but true, adult lessons are learned for the viewer throughout the film.
Meer lezen
25 mensen vonden dit nuttig
Vertaal recensie in het Nederlands

Kira D. Esperante
5,0 van 5 sterren ... the few films I can watch repeatedly without being bored out of my mind
17 december 2017 - Gepubliceerd op Amazon.com
Geverifieerde aankoop
This film ranks in my top 10 and is one of the few films I can watch repeatedly without being bored out of my mind. Bradley Cooper and Jennifer Lawrence are fantastic together in this film and the portrayl of behaviors associated with bi-polar and borderline personality disorder are the closest I've seen to my observed reality of those illnesses (without a hopless train wreck as the ultimate conclusion). Great story, solid script and exceptional acting made me care about the characters and become involved in the experience. I strongly recommend this film to anybody dealing with a loved one suffering from mental illness. I truly believe it can help them to understand that the impulsive, erratic, self-destructive and delusional behaviors they sometimes endure are not a choice and cause more pain and suffering to their loved one than they could possibly imagine. I also love the way the film illustrates how so-called "normal" people all have their mental health issues; they just haven't been diagnosed, labeled and put in a box by the health care industry and, hence, by everyone in their lives who then judge them based upon a label they can never remove.
Meer lezen
16 mensen vonden dit nuttig
Vertaal recensie in het Nederlands
Ga naar Amazon.com om alle 3.443 recensies te bekijken 4,4 van 5 sterren
Ontdek het beste van shopping en entertainment
Gratis en snelle bezorging van miljoenen producten, onbeperkt streamen van exclusieve series, films en meer
> Ontdek Prime
Terug naar boven
Over ons
Verkoop bij ons
Amazon-betaalmethoden
We helpen je graag
© 1996-2020, Amazon.com, Inc. en dochterondernemingen