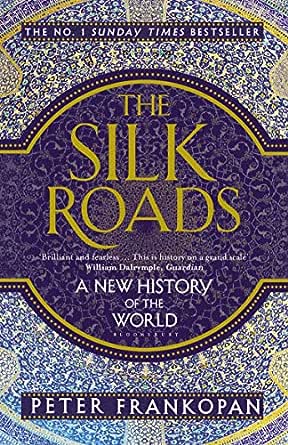 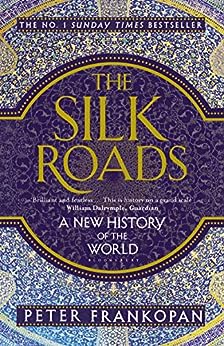 The sun is setting on the Western world. Slowly but surely, the direction in which the world spins has reversed: where for the last five centuries the globe turned westwards on its axis, it now turns to the east.

For centuries, fame and fortune was to be found in the west in the New World of the Americas. Today, it is the east which calls out to those in search of adventure and riches. The region stretching from eastern Europe and sweeping right across Central Asia deep into China and India, is taking centre stage in international politics, commerce and culture and is shaping the modern world.

This region, the true centre of the earth, is obscure to many in the English-speaking world. Yet this is where civilization itself began, where the world's great religions were born and took root. The Silk Roads were no exotic series of connections, but networks that linked continents and oceans together. Along them flowed ideas, goods, disease and death. This was where empires were won and where they were lost. As a new era emerges, the patterns of exchange are mirroring those that have criss-crossed Asia for millennia. The Silk Roads are rising again.

A major reassessment of world history, The Silk Roads is an important account of the forces that have shaped the global economy and the political renaissance in the re-emerging east.

A major reassessment of world history in light of the economic and political renaissance in the re-emerging East, as well as a rediscovery of the seductive cities of Samarkand, Bukhara, Isfahan and Constantinople. Now in paperback
Alle bekijken

Theo Meijering
4,0 van 5 sterren Stimulating even if somewhat monoscopic
20 januari 2018
Indeling: Kindle-editieGeverifieerde aankoop
Stimulating even if somewhat monoscopic historiography of the large scale dynamics of world history supposedly centering on the Eurasian belt spanning from the eastern Mediterranean to the shores of China and India through its pivotal connection space, where it all happens, the hidden heart of world history and politics, the Silk Roads through Central Asia. A remarkable and illuminating new perspective.
Meer lezen
Nuttig
Commentaar geven Misbruik melden

Bert de Ruiter
4,0 van 5 sterren How the west has won
21 maart 2017
Indeling: Kindle-editieGeverifieerde aankoop
Refreshing look at the histoy of the middle and far east and how the west has rewritten it to its own glory.
Meer lezen
Nuttig
Commentaar geven Misbruik melden
Vertaal recensie in het Nederlands
Alle 2 klantenrecensies bekijken
Klantenrecensie schrijven

Robin Wakeman Salmans
4,0 van 5 sterren Examining the Long History of What is now Iraq, Iran, and Afghanistan
28 mei 2018 - Gepubliceerd op Amazon.com
Geverifieerde aankoop
Author Peter Frankopan sets out, mostly successfully, to reorient our knowledge of history as taught in Europe and North America — history as viewed through the lens of Western Civilization courses. My quibble is that this is still a view of Central Asia though European eyes, and arguably the author pays slight attention to the history of ancient India and China and overplays the history of Central Asia and Western misconceptions of the Mongols.

Frankopan’s main thesis is that the region stretching from the Mediterranean to China, and particularly the region that is now Iraq, Iran, and Afghanistan, remains the crossroads of civilization and the center of global affairs. As such, we need to understand ancient history and historical development over more recent centuries, as well as the way history is perceived by those in the region.

The book proceeds chronologically. Chapter headings trace the many “silk roads” that have influenced global history, including the emergence and migration of major forms of religious faith, the rise and fall of empires at a time when Europe was an uncivilized backwater, and the role of trade as a conduit for the spread of ideas and wealth.

We learn, for example, that the early expansion of Islam was benign. Often the major religions coexisted peacefully. Mohammed and the Jews needed each other as both repudiated Jesus as the Messiah. In Damascus, churches were untouched even as Islam became the religion of the majority. Only after divisions began to develop in Islam did attitudes harden toward other religions, says the author.

Western Europe in the 600s and 700s was barbaric, while Baghdad was at the height of its wealth and academic achievement. Thus, traders and intellectuals along the Mediterranean were oriented toward the East, not Western Europe. Among conventional beliefs that Frankopan seeks to puncture is the notion that the Mongols were chaotic. Instead he says they were good bureaucrats and operated as a meritocracy. Terror was applied selectively but was broadcast broadly as a tool of coercion. The result was to control wealthy territories with a minimum of effort.

As Elizabethan England competed with Spain, says the author, there was an opportunistic alliance with the Muslim world against a common enemy. Both the English and the Moors engaged in piracy against the Spanish and Portuguese. The English freed Muslims who had been “galley slaves” and returned them home, and had Muslim support for the 1596 attack on Cadiz. Shakespeare portrays positively the Moor in Othello and Persia was also characterized favorably in English literature of the time.

By the late 18th and early 19th Century, however, the power relationship between rising Western European powers and Persia and neighboring countries had been reversed. India became a crown jewel in the British Empire and the British became preoccupied with fear of Russian expansion into Persia. Misunderstandings were rife. “The British cannot say what they mean and the Persians do not mean what they say,” noted one observer.

In the aftermath of World War I, the British created Iraq out of Mesopotamia, arbitrarily combining a hodgepodge of nationalities. As oil was discovered in Iraq and Iran, the British moved quickly to exploit these resources and minimize the royalties that were paid to the nations from which oil was extracted. Dissatisfaction with British oil companies resulted in a greater role for American oil companies, but the exploitation of the region changed little until OPEC was formed.

The final 40% of the book is devoted to British and American ignorance and arrogance in the 20th and 21st Centuries, resulting in the support of the Shah in Iran, Saddam Hussein in Iraq, and Ayub Khan in Pakistan among others. Frankopan characterizes British, then American strategy as “solving today’s problems without worrying too much about tomorrow’s problems.”
This is useful background for anyone trying to understand the resentment felt in Iraq and Iran toward the West today.

As Frankopan looks forward, there is little analysis of the potential role of China in the balance of power that could shape the region’s future or of India whose population and economy are among the world’s largest and fastest-growing.

Instead, with an emphasis on what was once known as Mesopotamia, the author asserts that, “the Silk Roads are rising up once more.” Events that appear chaotic instead are the “birthing pains of a region that once dominated the intellectual, cultural and economic landscape of the world…We are seeing the signs of the world’s centre of gravity shifting — back to where it lay for millennia.” This seems an optimistic analysis.

In sum, the value for many readers will be found in the first half of the book, as a balance to the history taught in the West. The resentments held in the region toward American and British influence are the result not just of recent decades but of exploitation taking place in the past 100 years. Oddly, though, the author’s contemporary assessment of the region seems viewed through the same Western lens that he criticizes as having warped our understanding of the past.
Meer lezen
94 mensen vonden dit nuttig
Vertaal recensie in het Nederlands

Gardener
2,0 van 5 sterren Surprisingly Disappointing
24 april 2016 - Gepubliceerd op Amazon.com
Geverifieerde aankoop
I was very disappointed after reading all the wonderful reviews. Maybe they are reading a different book? I had assumed we would be learning about the history of the silk roads and the many dynasties that rose and fell along the route - the Songdians, the cities of the Tamir Basin for example. I thought this would be an Asian centric book showing the silk roads impact on Han Dynasty China and the steps that had to be taken to keep the route secure. I thought we would learn of the earliest use of the silk road in trade between Sumeria and what is now northern Afganistan based on the early trade in Lapis and how this led to the later creation of Faience. Or perhaps how the silk road brought Buddhism to the west and mixed the artistic sense of the descendants of Alexander's army with the Central Asian Buddhist cave dwellers. I was very wrong in my expectations.

Maybe I am missing something but this is still a Western-centric view, centered on Byzantium and medieval Europe. The first steppe dwellers we meet in any depth are the Mongols, who by that time, are a thousand years later than the early steppe dwellers who so profoundly influenced world culture both East and West. This book spends most of it's time in detailing the trade and fortunes of the West instead of focusing on the various kingdoms of the silk road. What is going on here? How could all the reviewers have missed this? This book is not as advertised a new history of the world, but rather a view of the economic impact of trade on the western world. For example, how does Columbus come to bear on the silk road? We read here about his expedition but no analysis relating to the silk road at all. That is one of many examples to show that the author does not seem to have much interest in writing about the silk road, but rather about how luxury good trade impacts the western world.

This is my first book review although I have read dozens that I may not like. I am only writing this because it is not that I do not like what is written, but rather it is not what the book title implies and I want to give fair warning to others who may be like me in their interests.
Meer lezen
1.226 mensen vonden dit nuttig
Vertaal recensie in het Nederlands

Michael j. Duff
1,0 van 5 sterren Diminishing Retuns
14 november 2018 - Gepubliceerd op Amazon.com
Geverifieerde aankoop
An interesting start gives way, as the book progresses, to an increasingly bizarre and hysterical insistence that the premise of the thing is relevant when it is clearly not. True, from late antiquity through the early modern era, central Asia, when not the heart, was at least the crossroads of the world, or at least the Eurasian world; the book suggests that the Americas outside of the United States and most of Africa have little relevance to mankind. However, in screaching to claim central Asia’s central place in the world, the author resorts to strange and deperate means. For one thing, his definition of central Asia eventaully stretches from well into China westwards well into North Africa. In the author’s view, Israel is of tertiary relevance to the modern history of the Middle East. The list of distortions and deceptions, most probably self deceptions built on a world perception distorted by the lens of the British Empire and modern academic faddihness, is too long and ridiculous to dwell on. Suffice it to say, a perspective on how the silk road and the territory surrounding it affected world culture is adventageous. However, it won’t be found here as the author passes from assertion to fantasy in making his case through the book, and the reader is left wanting.
Meer lezen
31 mensen vonden dit nuttig
Vertaal recensie in het Nederlands
Ga naar Amazon.com om alle 535 recensies te bekijken 4,4 van 5 sterren
Terug naar boven
Over ons
Verkoop bij ons
We helpen je graag
© 1996-2020, Amazon.com, Inc. en dochterondernemingen